Most people don’t realize that the history of NASCAR is the history of bootlegging and blockade-running during the era of alcohol prohibition in the US, between 1920 and 1933. The outlaw origins of the sport started with drivers in Appalachia, including Virginia. These bootleggers would modify their cars for speed and handling in order to account for the increased weight of their illicit moonshine, and to give them an edge outrunning the police.

When prohibition was repealed in 1933, moonshine runners continued to develop their machines and by the 1940s they were racing their cars semi-professionally. 70 years later, RVA Mag went behind the scenes at Richmond Raceway during Saturday’s Federated Auto Parts 400, to see what happens when 40 cars running at 800 horsepower race in close quarters at over 100 miles per hour for around three hours.

Today, NASCAR runs 36 races a year, two of which are at Richmond Raceway, a three-quarter mile track that runs its races at night. What most people don’t get to see is the sheer expanse of people, parts, and pageantry that goes into running one of these races: the five pit crew members for each vehicle, who can change four tires and refuel the car in 13 seconds; the crew chief and race engineers; the fighter jet fly-overs; the Marine Corps band; and of course, Governor Northam.

And with the average age of current drivers hanging somewhere between 20 and 33, the sport has an energy and accessibility that is befitting of its origins, which makes the experience all-encompassing. The sheer volume of 40 cars that run at a decibel level almost 900 times above a person’s daily average for noise in-take, the percolating smell of fuel, the concrete track on pit-row that is sticky with burnt rubber from tires that are changed up to 12 times per race, and the athleticism of the crews who keep the cars running for all 400 laps.

While the entry point for NASCAR might seem intimidating for first-time race-goers, the experience is unlike any other sport. And unlike other forms of motor sports, NASCAR is unique in that there is a certain level of egalitarianism to the way the teams are structured. What this means, in real terms, is that unlike Formula-1, the NASCAR team with the most money is not always likely to win.

For instance, NASCAR regulates just how big the engine can be, limiting the size to 358 cubic inches, restricting the amount of horsepower an engine can produce. This ultimately makes the racing experience more about driver competency, rather than dollars spent on high tech racing gear. Because of these rules, the race leaders of the change frequently – sometimes with multiple race leaders on a single lap.

Regardless of what your impressions might be, unless you’ve been to a NASCAR race, they’re probably wrong. Richmond Raceway is one of the best tracks on the circuit, and any sport where you can both bring in your own beer and booze, and have the constant potential for death defying race-cars is a result. Some of RVA Mag’s best behind the scenes photo from the Saturday race can be found below:

RVA Mag traveled out to Richmond International Raceway to check out this year’s annual AmeriVespa held here in the River City. The event, sponsored by the National Vespa Club of America and Richmond’s own 7 Hills Scooter Club, featured moto-enthusiasts from across the globe and yes, every kind of Vespa imaginable. The end result of this merry moto event was spot on. 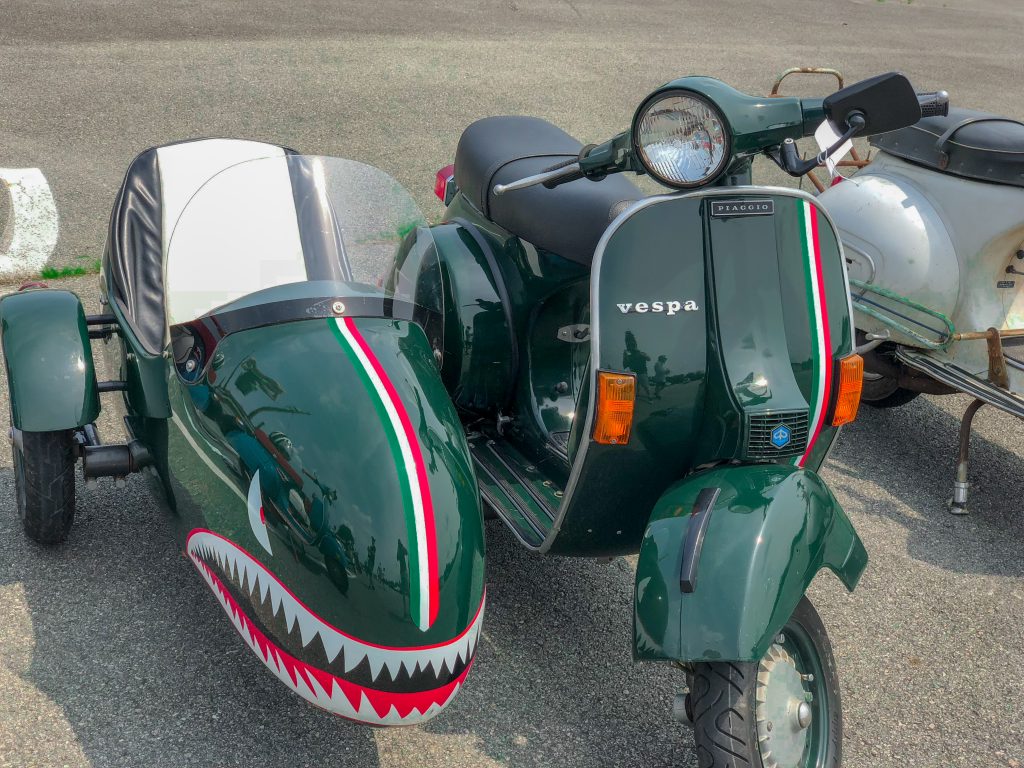 Arriving early, we found hundreds of Vespas and scooters had already begun their morning warm-up laps around a makeshift track before the day’s activities kicked off.

Thought as a lost art unique to a vintage Italian tradition and Hepburn’s comical ride in Roman Holiday, the event brought people from all ages and walks of life; many showcasing their rides with classic fits, customized bike designs, and gnarly club patches from the scattered locations they call home. Thanks to the low cost of entry, perfect for any swarthy two-wheel utilitarian, what started in 1946 as a symbol of post-war peace would become one of the trendiest two-wheelers in history. 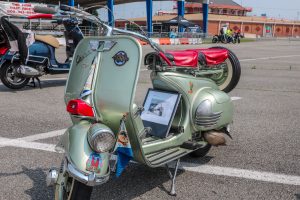 Put another way: This weekend, Italian vintage mixed with Richmond grime and the end result was rad.

RVA Mag spoke to the Vice President of the National Vespa Club of America, Jeff Lewis, to see how the event managed to come together in Richmond. “I think the biggest difference between a Vespa club and a [Chevy] Corvette club is that Vespa clubs don’t tend to be exclusive,” Lewis said. “Plus other clubs tend to be less slapstick, less fun. I want to come to an event and party, not have to worry about stepping on as many toes.”

Asked why an event that usually takes place on the West Coast decided to come to Virginia this year, Lewis said, “We operate on a bidding system, and Richmond, particularly Seven Hills Club here in Richmond, made their presence known.” The successful bid coincided with a desire to hold this year’s event on the East Coast, he said, adding that the planning “was exceptional…the local clubs have gone out of their way to make this a breeze.”

The highlight event – one dating back to its Italian roots – was Gymkhana, or scooter games, which were held in the main pavilion. Although we were skeptical, the scooter drivers – with some much-needed sponsorship by Belle Isle Moonshine – got down and dirty with the carnage. “Gymkhanas are obstacle courses, usually with the older vintage style bikes, because they are a little bit more rugged and they have better ground clearance. Newer bikes would get trashed on the same course,” Lewis said. 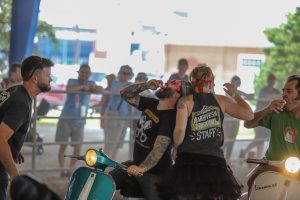 The event began as two preliminary qualifying races that would lead up to an ultimate matchup of competing Vespas and scooters, and the ensuing mayhem whipped a torrent of excitement from the crowd. The debris was impressive and fitting, as the riders were made to scarf down biscuits and slam PBR amidst the ensuing dust storm that overtook the arena.

Though obviously excited for the obstacle event, Lewis was quick to remark that the true main event was the headliner and the most intense race you’d never expect. “It’s the slow race,” he said, “How slow can you get from point A to point B while balancing on the bike? It’ll be intense.” Surely enough, this race was not for the faint of heart, although a contest at this speed meant a single ill-timed blink wouldn’t lead to missing the race. 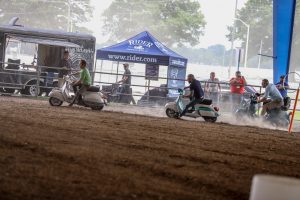 There were gorgeous bikes and warm faces gathered all across the raceway, all under a sunny weekend at the race track. Spills were met with applause and rivalries were all in good taste. Lewis assured us that the award ceremony on Sunday would have a range of awards, from raddest bikes to longest commute for participants. “We actually had a guy last year that circumvented the United States,” he said. A tradition that may have started in Europe continues on in a uniquely American atmosphere – an experience of its own that might put any other form of transportation to shame. 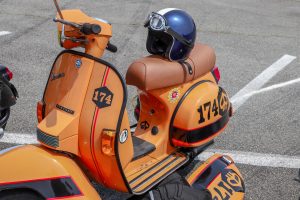 With over 16 million in use, it’s surprising these bikes remain relegated to a sub-culture within their respective clubs. Vespas are a design that exudes vintage Italian charm, but also a statement of self-expression that is a canvas taken to every bike. Gnarly.

Some of the best photos from AmeriVespa can be found below:

There’s lots of reasons to be jazzed for Fall. Halloween, the changing of the leaves, apple picking, pumpkin everything, these are well and good, but if you want to know why I’m jazzed for Fall, it’s because it finally gets chilly enough for dark beer and whisky.
END_OF_DOCUMENT_TOKEN_TO_BE_REPLACED

Virginia Comicon will return to the Richmond Raceway on November 22-23. After being started 28 years ago under the name “Chester Comic Collector” by Guy Rose, the convention has grown to be one of the largest and best in the state.

END_OF_DOCUMENT_TOKEN_TO_BE_REPLACED

It’s not unusual for people in Richmond to drink beer and whiskey and throw things, but this weekend, at the Central Virginia Celtic Festival and Highland Games, you can watch people in kilts throw really heavy things, all while sampling some fine whiskeys and beer (not the people throwing heavy things, of course).

END_OF_DOCUMENT_TOKEN_TO_BE_REPLACED

May 31 brings the 10th annual Stone Soul Music & Food Festival back to Richmond International Raceway. Presented each year by Radio One, this festival brings together stars of hip hop, R&B, and gospel music for live performances, along with food and beverages provided by at lesat 10 different area soul food restaurants.
END_OF_DOCUMENT_TOKEN_TO_BE_REPLACED