Every so often RVA Mag gets some craft brews to try, and its fun to try them out to see what creative recipes Virginia breweries are churning out. Recently, we had the chance to try Starr Hill’s latest releases, the Summer Jam Variety Pack, four cans of light, refreshing goodness and just what we needed on these sweat-your-ass off days we’ve been having.

Now of course, we were in a hot office sampling these, but these four brews would be perfect for a cookout or a lazy day floating on the James. Starr Hill even created a playlist for you to listen to while you drink these. 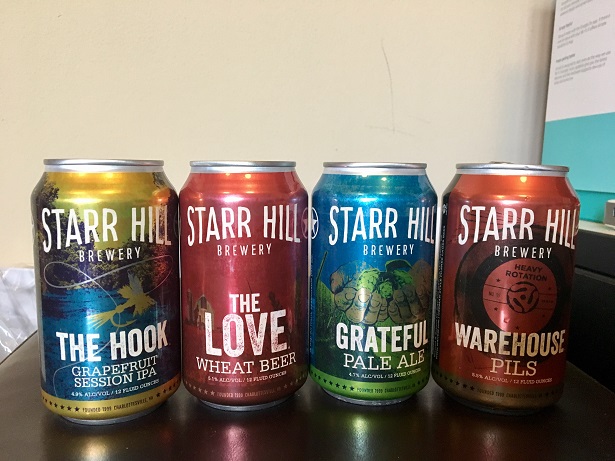 But let’s get down to what we thought. So, included in the pack is the Grateful Pale Ale, The Hook (Grapefruit Session IPA), The Love Wheat Beer, the Warehouse Pils. Here’s the breakdown:

A 5.5% German style Pils. The brewery  made this in celebration of the Dave Matthews Band 25th Anniversary show. It’s a classic pilsner, malty. For the people who like PBR, this is a classier step up from that. Dry hop bitter aftertaste, easy drinking if you have a block of sharp cheddar around which is what Starr Hill recommends for this brew. Can’t go wrong with a beer and cheese pairing.

5.1% German Hefeweizien. Light body, fruity aroma and super easy drinking. Great for summer to have several while drinking near the river or a day at the beach. Little spice on the end. Star Hill suggests lemon dessert bars, which sound delicious. It would be great if they would send those! (Hint, Hint)

A 4.9% IPA packed with flavor.  Super zesty with the grapefruit punching you in the face with the first sip, but in a good way. This one was my favorite, the grapefruit overpowers the hops which I like, President John Reinhold wanted a little more of a hop profile, but still took the grapefruit punch to the face like a champ. Starr Hill suggests Jerk chicken with this citrusy session IPA which I think would make a great pairing with the fruit and spice. We do however appreciate them not mailing us jerk chicken. Seasonal, available May-August.

A 4.7% hop forward pale ale, a flagship at the brewery. So this was a favorite of both John and myself. I first tried it on a recent trip up to the brewery to scout out rehearsal dinner locations and I couldn’t get enough of it. Its’s a awesome beer for outside and festival season. Very drinkable, fruity and smooth. The brewery used Cascade, Centennial, Mosaic & Falconer’s Flight hops for the Grateful Pale Ale and they really come through. We savored this one and this won out as the office favorite. Starr Hill recommends Thai Green Curry and Lemon Meringue Pie. Odd, but we trust them. They do have a recipe for Grateful mac and cheese which I would highly recommend. Check it out here.

You can only get these for a limited time so check out more details on Starr Hill’s Summer Jam Variety Pack here. Cheers!

Our cup is overflowing with news this week from releases, to events, and other cool happenings around town, so hold on to your mugs because we’re getting ready to tap this thing! (You can check out last week’s releases here.)

This Friday, Hardywood will release its Just Oatmeal IPA. The brewery will have Opa Food Truck serving their greek influenced menu.

On Sat., July 1, Hardywood will release its VA Blackberry brew, a Belgian wheat beer brewed with a touch of rye and a massive addition (over 1,000 lbs. per 40-barrel batch) of plump, ripe blackberries grown by Agriberry in Hanover County.

Final Gravity will also release their Euphrates Wheat DIPA on Friday at their brewery.

Garden Grove Brewing Company will release its Hibiscus Harlequin, a 6.1%  amber Saison, fermented with sweet orange peel and hibiscus flowers. This ale is usually fermented in wine barrels. Pleasantly fruity and quite drinkable.

Tonight, Strangeways Brewing will host a Cheers for Charity event to benefit the Alzheimer’s Association.

Buskey Cider will host a red, white and blue CIDERbration starting on SAt., July 1 through the 4th. Red, White, and Blue flights will be served at Buskey Cider in Scott’s Addition all Independence Day Weekend! We’ll end the celebration on July 4th with a view of the fireworks from our building over the Flying Squirrels Baseball Diamond! As and extra bonus, FREE hot dogs on Sunday, Monday, and Tuesday!

On Saturday, Lickinghole Creek will host its annual Pig Pick Party. Papa V’s Backyard Grill will be roasting the pig and serving it up with their delicious, fresh made sides. A $25 ticket is good for a whole pile of BBQ, three sides of your choice, a pint glass, and a beer! Tickets are being sold before and at the door but they are limited. Get yours here.

On Saturday, Midnight Brewery will release its Christmas at Midnight brew, an English mild Ale that has plenty of “Christmas spices” you’ll be sure to love.

On Thursday, Three Notch’d Brewing Company RVA Collab House is back with a new brew. This time, its “Double Hump” a DIPA made in partnership with The Camel. Double Hump carries juicy tropical, citrus and earthy notes from Mosaic hops.

Center of the Universe will release its Monkey’s Uncle brew, a lemongrass-infused Belgian style tripel.

On Friday, Goochland’s Lickinghole Creek Craft Brewery announced it will expand its operations with a new production brewery in Lynchburg.

The brewery will invest more than $14 million and create 59 new jobs over the next three years for this facility as well as expanding their current facility, which will undergo a major expansion complete with a 50,000-square-foot production brewery that will house a state-of-the-art brewing system and packaging line according to the news release.

Lickinghole Creek’s Goochland brewery, located on a 290-acre farm on Knolls Point Drive, opened in 2013 and made a name for itself in the local and regional beer scene with their barrel aged beers, unique recipes like the Heir Apparent, and taking home nine awards from various brewing publications and festivals.

The Lynchburg facility will focus on sour and barrel-aged brews and owners Lisa and Sean-Thomas Pumphrey will increase production at the Goochland facility, introduce a lager beer program and a large taproom and event space. .

“Lickinghole Creek Craft Brewery is proud to be Virginia’s first farm brewery. The brewery has set a new Virginia agribusiness model with great success. This would not have been possible without the incredible support of the Commonwealth of Virginia, Goochland County and the city of Lynchburg,” said Lisa Pumphrey, CEO, Lickinghole Creek Craft Brewery in a statement. “We are excited to expand, and getting ready to share our world-class products—grown, crafted and brewed with love, right here in the heart of the Commonwealth—with the rest of the country.”

According to the news release, The Virginia Department of Agriculture and Consumer Services (VDACS) worked with Goochland County, the City of Lynchburg, and the company to secure these projects for Virginia. Governor McAuliffe approved a $250,000 grant from the Governor’s Agriculture and Forestry Industries Development (AFID) Fund for the expansion in Goochland, and a $50,000 AFID grant for the new facility in Lynchburg.

Richmond may not be sprouting another brewery from a major city anytime soon, but Virginia just received just nice little beer news yesterday.