If you missed last week’s beer news, you can check those out here. We are kicking off Virginia Craft Beer Month and our cup is overflowing with news this week from releases, to events, and other cool happenings around town, so hold on to your mugs because we’re getting ready to tap this thing!

Steam Bell Beer Works has a few releases for you this weekend. First up, the return of Twelve Trees on Saturday. The brew is a 5.9% ale fermented with pears, coriander and orange peel. Live music, food trucks.

Also on Saturday, Steam Bell will release Attaboy Brown Ale, a recipe founder Brad Cooper perfected in his home brewing days with family friend Mike Snead. This hoppy and well-balanced ale is their take on an American Brown.

Center of the Universe is celebrating VA Craft Beer Month and gearing up for Pride with a collaboration beer and celebration with VA Pride on Saturday. At their COTU-Cabana party, the Ashland brewery will release Tropic Like It’s Hot, a Hefeweizen with passionfruit, pineapple and lime brewed in partnership with Ardent, Hardywood, and Virginia Pride. The theme is tropical obviously, and the day’s activities include free salsa lessons, tropical cocktails made with the beer, a Carmen Miranda lookalike contest, and special guest bartenders.

Hardywood has packed a ton of festivities into this weekend starting tomorrow with their Food Court.

On Friday, they will release their Strawberry Papaya Berliner Wiesse, a German-style sour wheat ale on draft and growler fills.

On Friday, Hardywood is also celebrating Toast’s 5-year anniversary with a collaboration beer release with them. No details on the brew itself you will just have to head to Toast, located at 7007 Three Chopt Rd. and see.

Triple Crossing is overflowing with beer releases this weekend. they will have a quad can release at the Fulton location. Here’s the rundown:

Also on Friday at their first location on South Foushee St., Triple Crossing will release Salinity Gose, their take on a Gose featuring salt and coriander in crowlers.

Midnight Brewery is continuing with their Saturday shindig this weekend, this time with Poor Boy Burgers and Church Hill Music Co., and of course their craft brews.

Three Notch’d Brewing Company RVA Collab House is back with its Thursday collaboration, this week its “Waterman” a wheat ale brewed with Crosswind Paddle Co. Collab taps at 5pm, Brewer’s Toast after 6pm and t pint specials on the 1st keg until it kicks or until 9pm.

On Friday, Three Notch’d has partnered with Mechanicsville’s Lush Cupcakes for a special pairing. The alcohol-infused treats will four unqiue flavors that were made with Three Notch’d beer.  Each cupcake and topped with various flavors and liquors in the buttercream. Come grab a flight of cupcakes for $10.00, or individual cakes for $3.00 each. Then, step on over to the bartender and snag a matching flight of the four beer pairings.

Buskey Cider looks like they will have a new delicious treat this weekend with the launch of their Habanero Honey Cider. Made in collaboration with Belle Isle Premium Moonshine, the cider will be released this Friday at 5:30 at Fat Dragon Chinese Kitchen and Bar.

The Veil Brewing Co. wants to extend summer as long as they can with their Forever Summer Festival this Saturday. 100% of the proceeds go to ChildSavers. There will be 3x sessions: -Session A:11am-2pm, Session B:2:30-5:30pm, and Session C:6-9pm. *THERE WILL BE NO AFTER PARTY* Two tickets max per person so get them early! Tickets are $90+each.  Food not included, check out link above for food vendors and more details. Tickets here.

Final Gravity will release Scientifical Madness, a 8% DIPA that will be tapped at the brewery and for The Veil’s FOrever Summer Fest.

On Thursday, from 3 to 8 pm, Fine Creek Brewing Company in Powhatan will host a benefit for the Fine Creek Fire Department. A portion of all proceeds from the night will go toward FCFD.

Any submissions or ideas for Tapped can be sent to Amy at [email protected] Cheers!

August is Virginia Craft Beer Month and RVA Mag is going to celebrate all month long bringing you beer news, events and other fun boozy festivities.

Today’s news comes from USA Today, who recently published a slideshow of the top 50 travel-worthy breweries around the world and one of little ol’ Richmond’s own made the cut.

The publication named Scott’s Additon’s Isley Brewing Company as one of the best beer destinations to see. The brewery opened in 2013 with Richmond native Michael Isley at the helm and Josh Stamps as head brewer.

California’s Stone Brewing Company and Deschutes Brewery (both which have Virginia locations now) were also highlighted as breweries to check out. 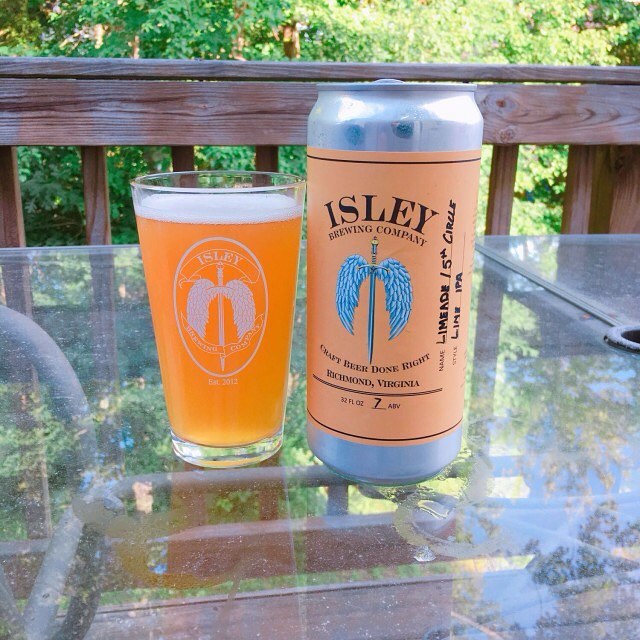 Isley may be surrounded by fellow competitors in the exploding craft beer scene in Scott’s Addition with its neighbors Ardent Craft Ales, Hardywood, The Veil Brewing Co., Three Notch’d Brewing Company RVA Collab House, Castleburg Brewery and Taproom, and most recently Vasen Brewing Co., which opened last weekend, but it has held its own with a steady rotation of solid flagships like the Choosy Mother Peanut Butter Porter and weekly infusions like Limeade 5th Circle IPA, Mango Smoothie En-V, and Chocolate Crinkle Cookie Oatmeal Porter.

You can check out USA Today’s full top 50 here, but in the meantime head on over to Isley, located at 1715 Summit Ave., to try out their newest release tonight, Chamomile Sour.

Virginia has long celebrated craft beer and the many breweries that keep popping up all over the state. With over 100 breweries and more on the way, VA is rapidly becoming a popular craft beer destination which is why August has been designated Virginia Craft Beer Month.
END_OF_DOCUMENT_TOKEN_TO_BE_REPLACED

So as you know every Wednesday we run the craft beer column “Tapped.” If you missed this week’s check it out END_OF_DOCUMENT_TOKEN_TO_BE_REPLACED

Get ready for the biggest craft beer fest of the summer in Virginia this weekend.
END_OF_DOCUMENT_TOKEN_TO_BE_REPLACED