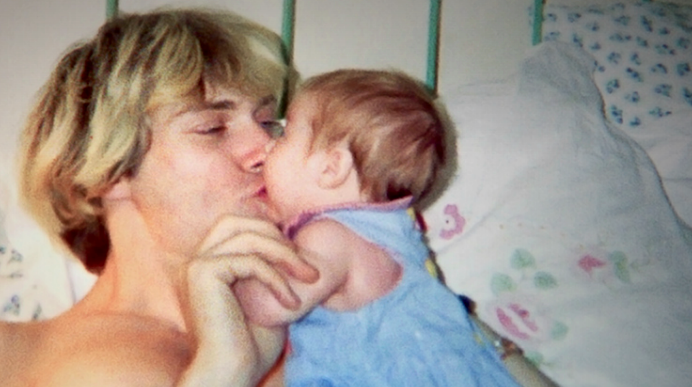 HBO’s new documentary about the life of Nirvana’s Kurt Cobain paints a brutal picture of one of the 90’s most recognizable faces.

HBO’s new documentary about the life of Nirvana’s Kurt Cobain paints a brutal picture of one of the 90’s most recognizable faces.

New exclusive footage, and 30+ mins of Cobain’s ‘audio autobiography,’ all featured in Montage of Heck give new insight to a story which had previously only been told in tabloid and music mags as rumors.

Shot with the full support of the Kobian family, and featuring interviews with Nirvana bassist Krist Novoselic, you’ll hear a number of stories for the first time as you venture through the 145 min cinematic experience.

If that kid only knew what hell was in store for him.

Wendy O’Connor, Cobain’s mother, shares numerous stories before animated scenes play under audio from the ‘audio autobiography.’ To hear Cobain talk about his youth in such detail harkens back to something like the Catcher in the Rye – how much he hates his classmates and how angry he is at the world, but he remains friends with them because they smoke weed and drink together.

Check out Cobain’s original “Montage of Heck,” a 30+ mix tape of sorts, which inspired the name of the doc:

Kurt Cobain's "Montage Of Heck" from SpaceEcho on Vimeo.

A particularly brutal scene details him losing his virginity (or almost losing it) to a local ‘retarded’ girl. These scenes, and others, are animated by Dutch animator and director Hisko Hulsing and they can be hard to watch. It gets even harder to watch when his classmates find out he fucked the neighborhood slow girl and they bully him even more.

A similar Hulsing scene talks about Cobain’s first suicide attempt, almost throwing himself in front of a train. It’s brutal to say the least.

We learn more about Cobain’s family life, his parents divorce, and him being shifted from family member to family member because he acted out so much.

As the band is finally formed, the early details are shown through animated pages from his notebook. Scribbled song lyrics, different names for the band, and crude drawings come to life with vivid detail.

Finally we get to Nirvana’s earliest days with VHS recordings in basements and at Olympia, WA, rec centers.

Super young Kurt leads mobs of angsty teens in a mosh pit in footage that is excellently restored in HD, as is the audio. For any fan of Nirvana, it’s sure to send shivers down your spine.

A sad-faced Novoselic gives interviews recalling his glory days. Again, it can be hard to watch because of where they are now.

The doc speeds through (not that fast mind you) the release of their first album, Bleach (1989). We get to the build up of Nevermind (1991), and Courtney Love enters the picture.

From here on out, the movie takes its darkest turn and becomes a junky fairy tale. Recent interviews with Love try and convince us of their occasional sobriety, but watching Cobain nod off during interviews, covered in blemishes, wafer-thin, it’s not hard to see what’s going on behind the scenes.

Again, this footage is EXPERTLY restored. Seeing Cobain in full HD play before sold out crowds on their international tour is both thrilling and disheartening.

It only gets worse with the birth of their child. Again, behind the scenes footage of the couple try and use Love’s words to paint a happy picture, but at what point do you realize it’s just two junkies striping naked with a child.

Finally we arrive at the release of In Utero(1994) and Cobain’s last hope for sobriety and sanity. Obviously neither worked out and the doc comes to an abrupt end with the death of its leading man.

I was born a little late to be fully part of Nirvana-fever, but their fame and impact was still reverberating with me as I snuck views of early 90’s MTV. The relentless play-throughs of “Heart-shaped Box” and “Rape me” lasted much longer than the band’s lead singer – same with the countless clones trying and failing to recreate their sound.

But then I got older and realized Nirvana and Cobain were pretty much rehashing Pixies songs, and my fandom faded.

I kicked on Montage of Heck with pretty low expectations, it’s probably been a decade since I’ve even considered putting on a Nirvana album in general, but I enjoyed (and finished) this lengthy documentary, treating it as a kind of time capsule into an age long forgotten.

We’re now 21 years past the release of Nirvana’s last album and while a number of tracks still hold up, my viewing experience was more about nostalgia than reigniting devotion.

And as exhaustive as the movie was, I was still left with questions:

Was this move an excuse for Love, who worked closely with the film’s director, to show off her younger-tits one last time?

Why was Dave Grolh almost totally absent from the entire movie?

And what would have happened if the leading man I saw so much of that night had not taken his life and continued to show his talents to the world.

I guess we’ll never know, but Montage of Heck is an interesting and comprehensive start.