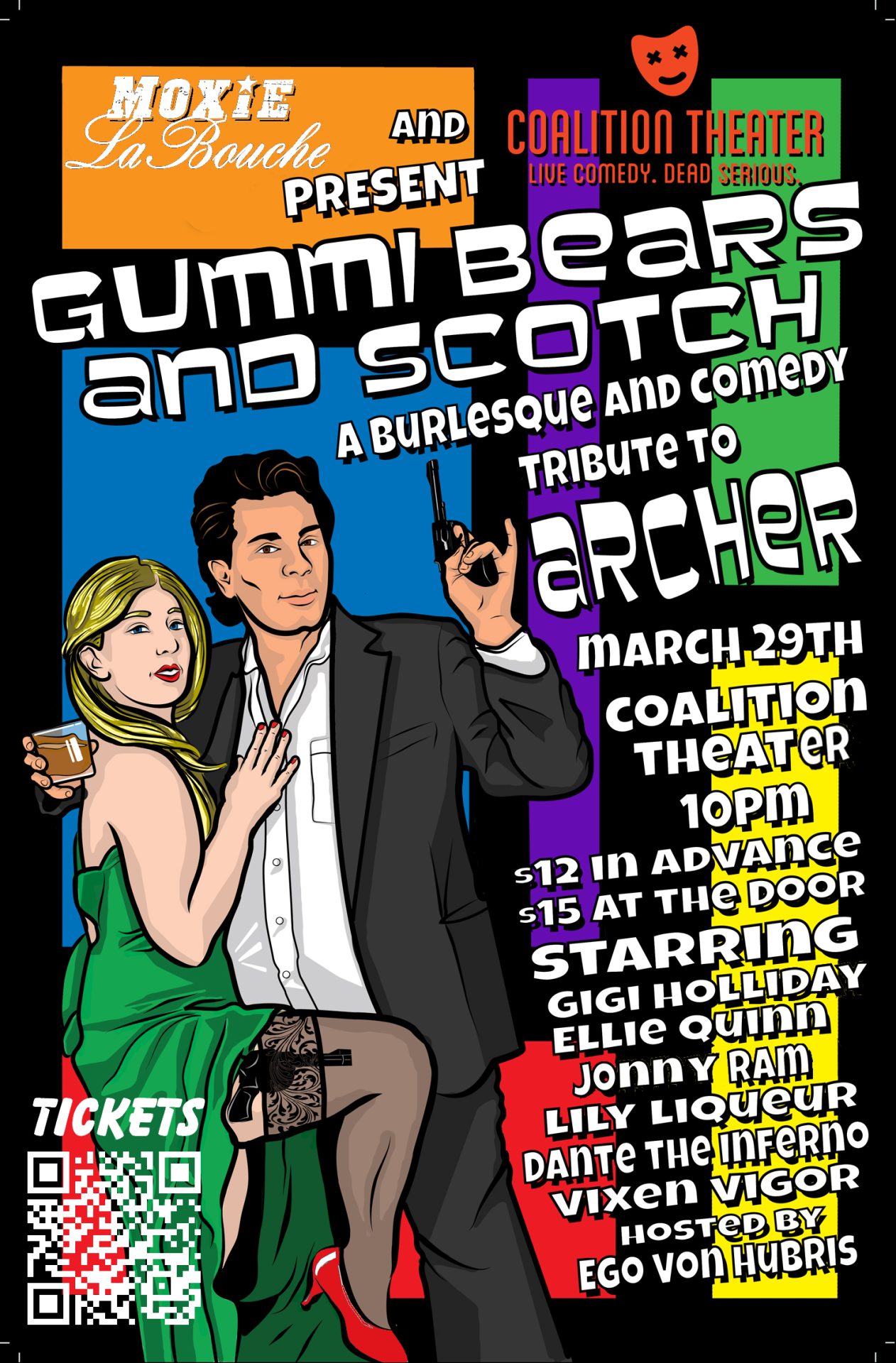 A burlesque tribute to Archer, FX’s zany, sleazy spy-parody cartoon for grownups? Did somebody say sploosh?

A burlesque tribute to Archer, FX’s zany, sleazy spy-parody cartoon for grownups? Did somebody say sploosh? The Richmond Comedy Coalition is joining forces with Moxie LaBouche of Those Freaking Weirdos and quite a few other local burlesque luminaries to present Gummi Bears & Scotch. This hilarious and sexy salute to Sterling Archer and his unforgettable supporting cast takes place this Saturday at The Coalition Theater, and you need to be there!

Burlesque is the perfect medium to adapt a cartoon both laden with ridiculous escapades of espionage and brimming with awkward and bizarre sexual tension. Once the whole thing is brought to life by this cast of talented RVA burlesque stars, it’ll take on a whole new level of hotness! Featuring the evening’s MC, Ego Von Hubris, in the role of Sterling Archer, the cast will also feature GiGi Holliday as Lana Kane, Jonny Ram as Dr. Krieger, Ellie Quinn as Mallory Archer, Lily Liqueur as Pam Poovey, Dante The Inferno as Cyril Figgis, and stage kitten Vixen Vigor as Babou, the ocelot.

Dante The Inferno IS Cyril Figgis; Photo by Dave Parrish

In-between burlesque performances, the Coalition Theater’s Agents Of Odin will present improv comedy sketches sure to delight. The evening should be just as funny–and three times as sexy–as an evening spent binge-watching Archer episodes on Netflix. So get out of your house and enjoy a real live burlesque/comedy team up full of action, adventure, and awkward one-liners at the Coalition Theater this Saturday!

WHAT: Gummi Bears & Scotch: A Burlesque & Comedy Tribute To Archer!
WHERE: The Coalition Theater, 8 W. Broad St
WHEN: Saturday, March 29; Doors open at 9:30, show starts at 10
ADMISSION: $12 in advance, $15 at the door–order tickets HERE

And you’re in luck, because your pals at RVA Mag have a pair of tickets to this amazing extravaganza to give away to one lucky reader! Just plug your info into the Punchtab box below by Thursday at 5 PM, and keep an eye out for extra chances to win!