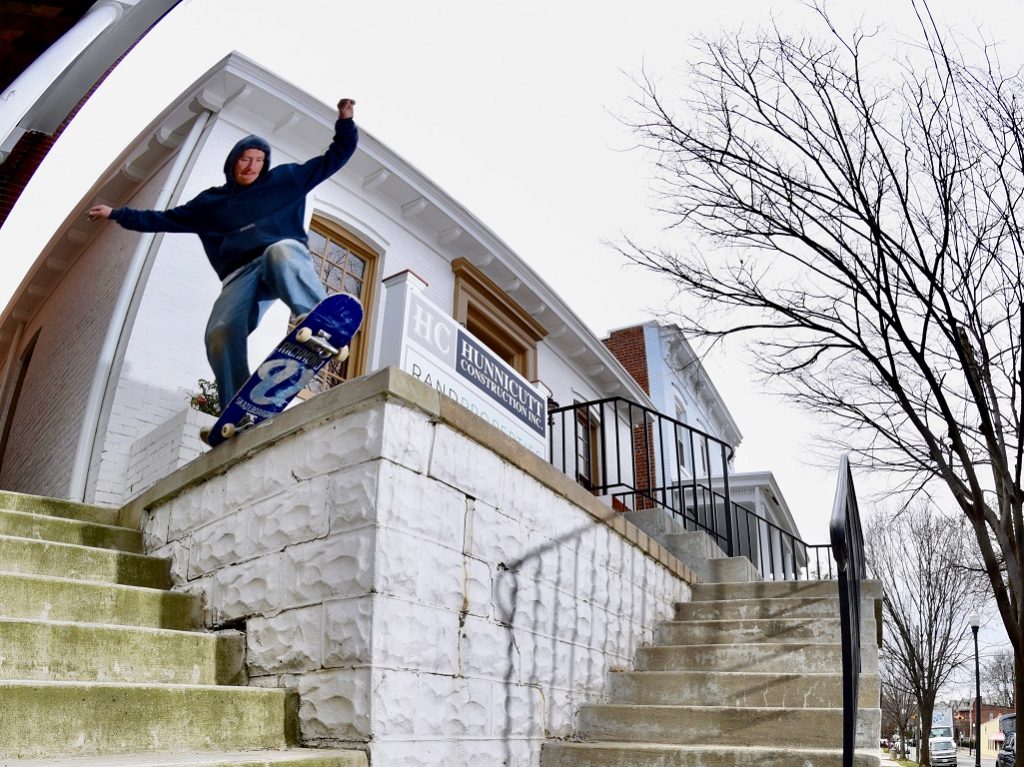 Will Rosenstock, Bust Crew, and Venue Skateboards are bringing Richmond’s best skateboarders to the Byrd Theatre next Friday with Nightmare Van.

The crusty, gritty streets of Richmond are a haven for a familial group of skaters that seems to keep on growing. And on June 28, they’ll hit the big screen, as Nightmare Van, a video by Will Rosenstock, will premiere at the Byrd Theatre in Carytown.

Rosenstock recently had footage used as part of Quasi Skateboards’ Mother, a long-form promotional video featuring Gilbert Crockett, another Richmond local. Rosenstock has also filmed several videos for local skate shop Venue Skateboards, formerly known as Dominion. Nightmare Van exclusively features Bust Crew, a collective or “crew” of skaters in the Richmond area. It was produced in association with Venue, but created entirely by Rosenstock himself.

According to Rosenstock, Gilbert Crockett basically put Richmond on the map for the skate community. Crockett’s debut video appearance, which made up the opening segment in skate shoe company Fallen Footwear’s 2008 video Ride The Sky, prompted his return from Los Angeles to Richmond. Once back in Richmond, Crockett and Rosenstock linked up and began working together. Their friendship and collaboration has been consistent ever since.

Existing in a relatively small city, the Richmond skate scene is very tight-knit. Venue Skateboards-sponsored skaters like Gilbert Crockett and Daniel Ravenal, as well as Venue owner Maury Blankinship, all tend to be on the same page about skating. “We’re all really tight, we all go on trips — we’re basically like a family,” Blankinship said. “They do a lot of stuff for the shop for nothing; they help the shop out a lot.”

Since the internet became available on a widespread basis, many brick-and-mortar retail stores have been in decline, and skate shops are no exception. But Blankinship has taken matters into his own hands, and by doing so, has seen an increase in the profit margin compared to the previous years. “This year so far has been far better,” he said. “All of the sewing and screenprinting [that] I do personally saves a lot of money, and the profits are larger.”

According to Blankinship, Venue’s skateboarders are a big help; they ride Venue skateboards, spread the shop’s name and logo around, help with promotion, and never ask for discounts. Rosenstock helps Blankinship maintain Venue’s Instagram account to help out with their social media marketing. “I’m letting Will have the whole spotlight for this premiere, since he worked hard on the video,” Blankinship said. “Let that be his own thing.”

Daniel Ravenal is only 22, but has lived in Richmond all of his life, and grew up skating in the city. According to Ravenal, looking up to the older generation of skaters and shop-sponsored riders like Blankinship, Crockett, and Rosenstock paved the way for his progression. “Having Venue here, and that community here, and to be a part of that, definitely changes the way you look at everything,” Ravenal said. “Richmond has a really good skate scene for the size of the city, I think people do look at Richmond skateboarding and respect it.”

Ravenal is getting “flowed” product — given free goods in exchange for public endorsement — from Quasi Skateboards and Adidas, and is part of another Richmond skate crew called Inbred. According to Ravenal, Inbred grew from the younger generation of Richmond skateboarders, which he was part of. After recognition from Rosenstock and Venue rider Ty Beall, they all just became friends.

“I’m very grateful to be here and film with Will,” Ravenal said. “It is nice to get recognition from those videos, and he does a really good job with them.”

According to Rosenstock, moving out to L.A. some years ago along with Beall and fellow Venue rider Jon Rowe helped build the connections that would lay the foundation for Bust Crew and the Venue videos to come. “We would meet people and they would recognize Jon or Ty, and go ‘What are these Virginia kids doing out here?’” Rosenstock said.

In fact, it was Rowe who inspired Nightmare Van‘s name, according to Rosenstock. Rowe had purchased a minivan and loaded it up with all sorts of power tools, saws, and other bizarre tools. Rosenstock, Rowe, Beall, and another filmer, Max Mattoon, would seek out abandoned buildings, dingy alleys and rundown houses. The crew would get into “bad kid things,” Rosenstock said, breaking windows and exploring decayed ruins, giving themselves the name “Nightmare Crew.”

“Anything you see in a Jon Rowe part, you’ll quickly realize it’s not a spot — it’s some piece of shit he found that looks cool,” Rosenstock said. “He’s just trying to find the worst possible thing ever to skate.”

This leads Rowe to some well-guarded spots in particular, like the SunTrust Bank corporate office on East Main Street. It has the kinds of marble ledges and stair steps that skateboarders go crazy for, but it’s heavily patrolled by security, and skateboarders can rarely skate there for more than 10 minutes without being chased off or having the cops called on them. But that didn’t stop Rowe from getting footage there — a fact that Rosenstock particularly appreciates.

“There’s this one trick, in particular, we probably went back for, like, 10 times,” Rosenstock said. “It was so relieving when he finally got it, because it would be such a battle. But he’d immediately start going for it — no time to warm up.”

The scrappy aesthetic of the city’s pro skateboarders has made them yet another local culture experiencing consequences from gentrification. As Richmond expands and new construction sprouts up around the city, some regular skate spots get destroyed, and Rosenstock finds that not much good comes from the new construction that replaces it. The new buildings and fixtures are usually built with knobs — hard, bolted-on objects intended to stop skateboarders from skating obstacles.

“We’re not getting anything in return, and we’ve lost a lot of awesome spots over the last few years,” Rosenstock said. “The charm of Richmond, for us, is that everything is so crusty and rundown.”

According to Rosenstock, during the creation of Nightmare Van, he and the crew usually took trips on weekends to places like Baltimore, North Carolina or D.C., just to get out of Richmond and skate different spots for film purposes. Sometimes the trips were even longer than that. “We took a week and a half in St. Louis,” Rosenstock said. “We did an Atlanta trip for like a week. I didn’t get to go, but they still stacked a bunch of footage out there.”

Whereas recent videos filmed by Rosenstock typically featured the same lineup of local skaters — Gilbert Crockett, Daniel Ravenal, Jon Rowe — Nightmare Van will have a few skaters that are relatively new to the scene in Richmond. Cory Bittle, from the Virginia Beach area, will have his first video segment filmed with Rosenstock. Bittle’s approach to skateboarding impressed the director.

“He doesn’t want to skate unless he’s just pushing himself as hard as he can,” Rosenstock said. “He will find the perfect spot for himself to do that specific trick, and he’ll either do it, or get so broke off and work so hard for it, [he’ll] probably come back later.”

Pat Burke is a name that some in the skate community may remember from the 2009 $lave Skateboards video, Radio Television. Burke’s segment in that video featured him throwing himself down huge sets of stairs and over large gaps.

“Everybody’s got their thing, and Pat’s is just flying down huge stair sets,” Rosenstock said. “I’ve never really filmed somebody who’s that consistent at jumping down huge gaps and stair sets.”

After Radio Television, Burke seemingly became irrelevant to the skate scene for a decade. However, he recently moved to Richmond, and after filming a clip with Rosenstock, the two found some chemistry. Burke’s been skating in Richmond for a little over a year now.

“He is just a wild animal when it comes to skating, he’s almost too motivated,” Rosenstock said. “He will get, like, four clips in a day, and that’s not enough for him.”

Most of the skaters involved in the video work full-time jobs, some of them doing hard manual labor or holding down a nine-to-five. “They’ll still bust ass and put out amazing video footage, just because they love the shop and they love to skate,” Rosenstock said. He’s certain that the results of their commitment will impress all Nightmare Van viewers. “I think people will realize, the dudes that ride for Venue are on another level of loyalty.”

The video premiere for Nightmare Van will take place starting at 5 PM on Friday, June 28, at the Byrd Theatre, located at 2908 W Cary St. in Carytown. Admission is free, and Will Rosenstock will be there selling physical copies of the video for anyone who might want to keep it on repeat for days to come, properly appreciating  all the blood, sweat, and time put into it.