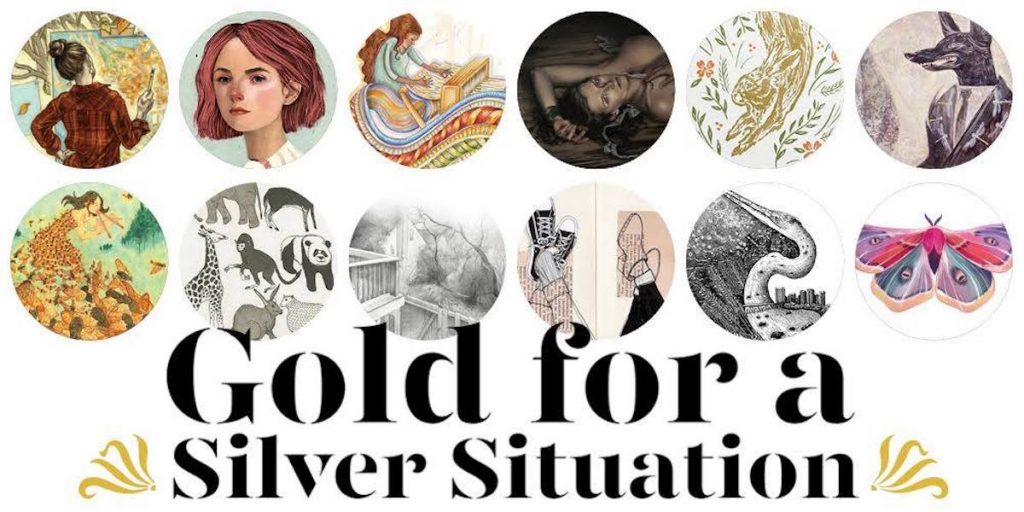 Gallery 5 is offering a stunning exhibit of talent while also providing a social commentary in its upcoming First Friday exhibit, “Gold for a Silver Situation.” As described by former New Yorker and Vanity Fair editor, Tina Brown, “women have always had to be gold for a silver situation.” Reaching new, unthinkable limits to be commissioned is the norm for female artists. In “Gold for a Silver Situation,” curator and participating artist Katie McBride wishes to provide 12 examples of local female artists whose work transcends any gender separation.

After attending VCU for communication arts, McBride, who works at the University of Richmond in print design, found that the professional field did not reflect the student body present in her classes. “I remember a lot of the professors saying, ‘Professionally, I know this seems like a boy’s club, but there’s more women in school now, so we can see that changing,’” McBride said. “Well, I graduated in 2004, and I don’t necessarily see the field has changed markedly in that way, and I think that it’s because of some unnecessary structural barriers that are making it a hard field for women to stay in for the long term.”

McBride sites many of these barriers rooted in societal expectations of the professional realm. One example she explained was the rigid deadlines many freelance artists experience, which often goes to men since women are seen as incapable of reaching these deadlines. Additionally, the concern of hiring a woman with a family automatically siphons employers to hire male freelancers.

“I get that it’s a boy’s club. It’s just like men are chefs, women are cooks. It feels shortsighted and knee-jerky to not consider female illustrators but as an afterthought.” She further explained that women are often thrown into gallery shows to diversify the featured artists, almost as if including a woman is a checkmark on a list of necessary items to be “politically correct.”

It is safe to say that if anyone is asked to recall the names of five famous painters, a majority of those names would be male. McBride emphasized that the awards realm of the art profession are also male-dominated. “It’s the same cook and chef mentality. When you see the Caldecott [Award], the preponderance of children’s book creators are women. The preponderance of Caldecott winners and book winners are men within the field,” she said.

For women to have to go the extra mile to be included in galleries, shows, and award ceremonies, McBride concludes that the societal acculturation for associating femininity with a lesser value than masculinity is the root of this problem. “There’s as much of a glass ceiling in art as there is in anything that we like to pretend is a meritocracy but we know is really not.”

After researching for a representative group of local to semi-local female or “femme” artists, McBride found 11 talented illustrators, painters, and more to include in Gallery5’s “Gold for a Silver Situation.”

McBride’s work is recognizable from the 2016 Richmond Folk Festival poster. Most of her other work features anthropomorphic themes, as well as detailed maps and whimsical and detailed illustrations. Her posters, maps, and illustrations exemplify McBride’s variety in color, detail, hue, and themes, all bound together by her love for storytelling, animals and nature, and more.

The work of Victoria Borges harkens the like of the covers of The New Yorker, soft hues and lines, mixing the airy with the real. Her commentary on social trends, the media, relationships, money, and culture all play into her art beautifully. The softness of her pieces mix well with her colors and balance.

The most striking feature of Mary Chiaramonte’s work is the realism. Rather than leaning towards one end of the spectrum, her use of the dichotomy between light and dark translate magnificently in her paintings. The amount of detail in her portraits and nature scenes are evident.

Illustrator Clara Cline stands apart from her fellow artists with her design of paper goods, gift wrap, prints, and scout badges. More specifically, her attention to detail provides stunning star charts, field guide manuals, and more. Her mixture of rustic vibes with the elegance of natural beauty equate to aesthetically-pleasing prints and paper.

Kamille Jackson finely points out the details in her typographically-inspired pieces. From her black-and-white drawings to her Richmond-inspired postcards, Jackson perfectly ties together type with the culture surrounding her. Even within the lettering and type itself, lines and colors bring out the depth of her work.

You may remember Langford from our interview with her in 2016 about her detailed artwork and Virginia wildlife mural, which won the RVA Street Art Festival Contest that year.

While many people have categorized 2017 a “dumpster fire” year, even more artists have utilized their work to communicate their feelings on the world around them. McBride is among those who wish to use their art to make a difference. “It’s been this feeling of, ‘I want to do something,’ and then the feeling of immediately being burned out.”

After the dozens of accusations of sexual harassment or assault of celebrities from all realms, the experiences, and difficulties women have had are coming to the surface from every profession and concentration, art being among them. “Female illustrators are not an afterthought. Walk in and see 50 pieces of amazing art and understand that these people should be first in your mind for a big, crazy, stunning, dramatic oil painting, or super smart conceptual think-piece, or a portrait, or whatever it is,” said McBride. “There’s a woman for everything you need. Women are not an afterthought and they shouldn’t be.”

“Gold for a Silver Situation” will be available for the January First Friday, which is Jan. 5, starting at 7 pm. More information can be found here.