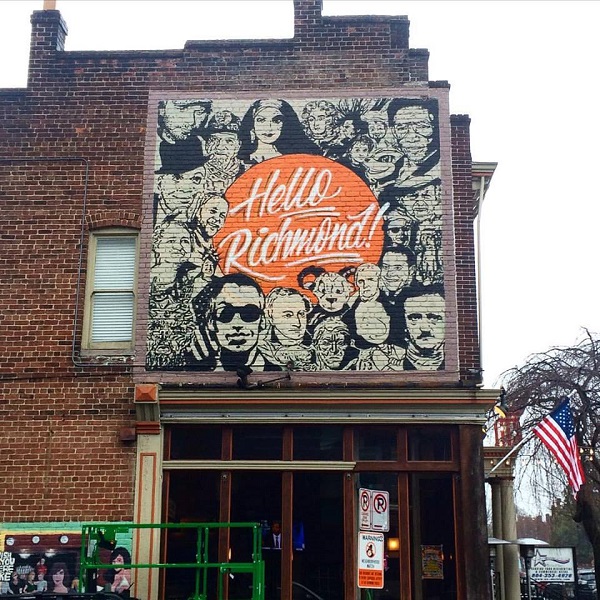 Longtime Richmond tattoo artist Charles Berger is known for his intricate and elaborate tattoos. He’s spent most of his years inking over at Heroes and Ghosts and now you can find him over at Lakeside Tattoo.

But lately, Berger has taken his work beyond tattooing. He, along with local artist Parker Galore, just finished up a mural Sat. Nov. 28 on the side of F.W. Sullivan’s on West Main Street.

Those driving or strolling down West Main Street the days leading up to Thanksgiving probably witnessed the tall, tattooed artist hoisted up on a big green lift going to work on his canvas.

He was up for a week until about 2 am each night making the “Faces of Richmond”, as the mural has been named, come to life on the side of the Fan bar.

The mural depicts women and men past and present that have left their mark on Richmond in one way or another.

The artists have also included Connecticut the Indian who once peered out at the public from The Diamond, but now the statue lives on the Lucky Strike building. In the center, the mural reads “Hello Richmond.”

To design the mural, Berger projected the image of all the faces on the side of the bar from a projector in the building right next door to Sullivans and was able to paint from that.

Berger said he wanted to have a mix of characters so everyone in Richmond could appreciate the mural.

“What I wanted to do is keep it historical, modern and fun so that’s why we have Doug in there,” Berger said. “I didn’t want it to be too much of a historical thing or modern thing that way it appeals to different age groups. We tried to put people up there that have done good things for the city or at least brought attention to Richmond.”

“I wanted to do something in that space for years,” Crocker said.

Prior to the mural, there was a faded logo of Richmond’s first internet café which was in business in the late 90s for less than a year.

“It was time for it to go,” Crocker said. “I’ve been such an enthusiastic supporter of the mural project and we just got our new one on the side of Uptown Market and Deli which is awesome.”

Berger happened to contact Crocker out of the blue a few months ago and the two started talking about something fresh to put on the side of the restaurant.

“{It’s} a diverse array of characters that this town has had the privilege to host over the years,” said Crocker.

The two especially wanted to pay tribute to some figures that haven’t been honored in any way for what they gave to the city.

“William Byrd II, he’s the founder of Richmond,” said Crocker. “There is nothing in this city, there’s no pictures, no statues, there’s literally nothing in this city that represents him at all. These are images and likenesses of people who were born, raised or had a real impact on the city.”

Since the “Faces of Richmond” depicts historical and modern figures, it might take more than just a glance for people to recognize them all. Berger said instead of having any kind of key he wants people to try and figure it out on their own.

“I think it would be a challenge for people to try to figure it out which I think is a cool thing it gets people talking,” he said.

Berger added as far as the female presence in the mural, there was one woman he wished he could have thrown in there: his wife.

“She’s the strongest woman I’ve ever known in Richmond,” he said.

“Faces of Richmond” isn’t the first time Berger tried his hand at mural work. The artist painted a mural on the Carytown Burger and Fries restaurant in Short Pump as well as one at the former GRTC bus depot for the RVA Street Art Festival. He’s also done a mural for a youth academy in Kenbridge, Virginia and a soccer club in Fredericksburg.

Berger also designs signs for different businesses such as Carytown Bike Company, Carytown lingerie store Fiamour, the windows at the Rogue Gentleman, the windows at Lakeside Tattoo and All for One tattoo shop and a sign for Gallery5.

For this artist, he prefers to switch up his day to day work routine.

“I enjoy working in different mediums it gives me a little more freedom,” he said. “You get burned out on anything you do all the time. It’s been a lot of fun working at night watching the bar crowd come in and there’s been a lot of good response from people waking by.”

As for Crocker, he said he’s excited to have something that his restaurant patrons will be talking about as well as a little piece of history on his business.

“It’s nice to have something that’s representing the community,” he said. “You can learn a little, it’s something that uniquely Richmond.”