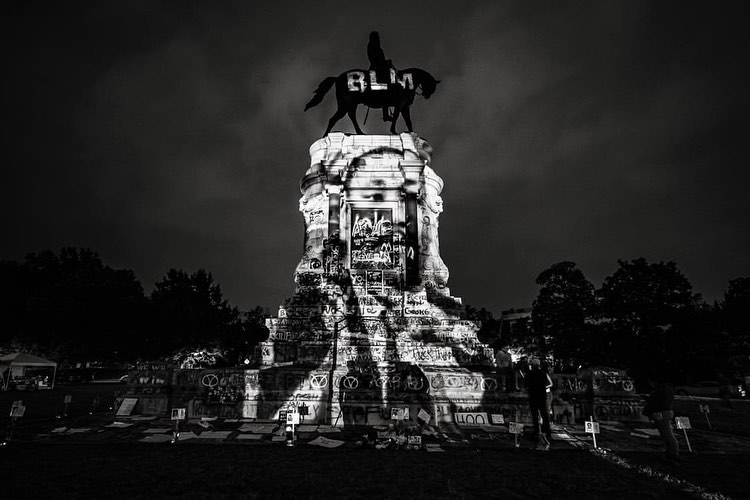 Amidst the nation-wide protests against police brutality in the United States, Richmond’s Robert E. Lee statue on Monument Avenue has become a canvas for the public. Following the death of George Floyd at the hands of Minneapolis Police, Richmond protesters have used the statue as a gathering place where they rest and give speeches between marches.

In the first few days of the protests, Mayor Levar Stoney set an 8 pm curfew. Since then, nearly every night since the curfew has lifted, lighting effects artist Dustin Klein, along with his friend Alex Criqui, has projected pictures of victims of police brutality on the monument’s graffiti-coated stone base.

“We were thinking this is a way to contribute where we wouldn’t be overtaking the voices who need to lead this movement,” said Criqui. “We thought this was a way that we could participate and add a unique contribution while using our voices in a way that’s appropriate for two white men.”

Despite the time and effort it takes to set up the projections, Klein and Criqui have not stopped joining the marches that take place earlier in the day. Once night falls, they are out there projecting, often until well after midnight.

The two began setting up similar projections before the lift on Richmond’s curfew, but limited themselves to privately owned spots where they had permission, such as Spacebomb Studios or The Camel on West Broad St. It wasn’t until the day the curfew lifted, when Klein got his hands on a generator, that he and Criqui began projecting on the Lee statue. They did so independently of any organization and with no permission, and have received nothing but positive feedback from protesters.

“This is one of the first times I’ve put something in the world where I think I learned more about what it meant after doing it than beforehand,” said Klein. “Just from talking to people and getting their reactions, and reading about how people felt about it on the internet.”

Klein and Criqui have not limited the images for their projections to George Floyd. They’ve also projected past victims of police brutality, such as Richmond’s Marcus-David Peters, and Breonna Taylor. Recently, they projected images of various civil rights activists, such as Harriet Tubman and Frederick Douglass, paired with famous quotes attributed to them. Sometimes, Klein and Criqui change images based on requests from other protestors, but it’s also often a thematic choice.

“We’ve been trying to tailor the images towards what’s happening on each day,” said Criqui.

The team projected Breonna Taylor’s photo on June 5, what would have been her 27th birthday. Likewise, they used both the Columbus statue and the Jefferson Davis Memorial as a base for their projections on the days protestors tore down those monuments.

This is the first political project that both Klein and Criqui have been involved in. Apart from these projections, Klein has been a lighting effects artist in the music industry, lighting concerts and music festivals for the past ten years. Klein frequently works with jazz-inspired or improvisational bands whose improvised pieces spur Klein towards a similar approach with his lighting. He often includes custom animations into the lighting, and improvises effects to fit the music using his own custom MIDI control set.

“I really just try to tailor what I’m putting out there to try and match the music as best I can,” said Klein. “I’ve just found myself working with music projects that… change every night. The music is always different every time they play it. So I’ve created my own control surface to help adapt to that situation.”

“Dustin is a total MIDI wizard,” said Criqui. “The way he approaches his stuff is pretty innovative and… performative. When this guy first started off, he was using [Nintendo] Wii controllers. That was really outside the box.”

Klein has also worked on several art installations outside of lighting concerts, often projection mapping on painted murals to create an animation.

Klein and Criqui may not have made political art before this, but they have no plans to stop projecting now.

“It’s what we’ve been doing in our free time,” said Klein. And I think we’re gonna continue to do that in our free time as long as we see the opportunity to create positivity and joy and love, and make a change the best we can. If the movement’s still alive, I think we will be too.”