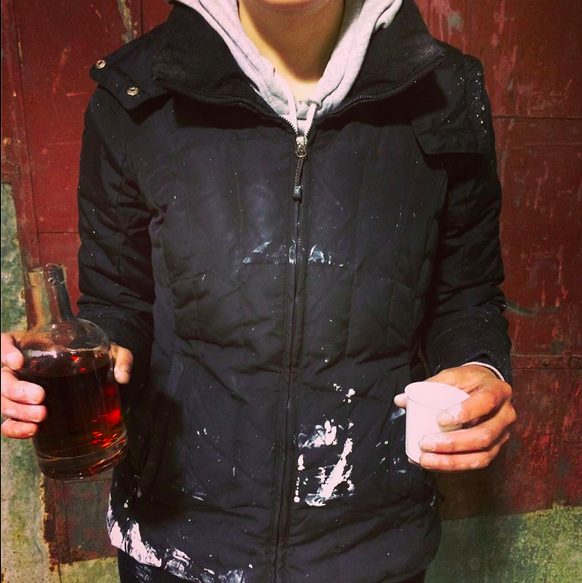 All about the Bourbon: Norfolk’s Ironclad Distillery

Resting quietly next to the Shipyard is Virginia’s newest distillery.

Resting quietly next to the Shipyard is Virginia’s newest distillery. One of three tacking towards production on the Peninsula, Ironclad is the only distiller around here focusing on bourbon.

Unlike other liquors that can be cooked, distilled, and bottled fairly quickly, bourbon takes time. It’s the temper of that time that could make Ironclad an essential element in Virginia liquor cabinets and on Tidewater bar backs for years to come.

This post originally ran on Norfolk’s awesome alternative blog, the AltDaily, check them out here.

The genteelly bipolar Coastal Virginia climate with its vessels of hot and cold humidity sailing in off the Chesapeake Bay is already giving Ironclad a distinct vigor.

When I visit Stephen King and sample his almost-bourbon the impression is of a Basil Hayden’s nervously pacing back and forth at a junior high dance. It’s not quite ready to boogie, but each sip belies potential.

Each time I raise the liquor to my nose the makings of a great bourbon materialize in the not-too-distant future. Each time it meets my tongue I taste how this bourbon will make a mark of its own.

It takes Stephen’s son Owen King a few shoves to get the large and dungeonesque door of the barrel room open. We peer out into the cold and look past the Nissan depot, past the barbed wire, and past the tall cranes.

We see where the Monitor fought the Merrimack during the Battle of Hampton Roads. We are standing where whiskey was smuggled onto Union Navy ships in oyster tins. We are standing in a room with three small barrels where, over a century ago, SW Holt stored and hocked his dry goods.

Owen tells me about their grains. The corn and wheat (which gives the bourbon its sweetness) are harvested just up the James River at Renwood Farms by six-time National Corn Growers Association Award Winner David Hula.

Their rye comes from Goochland, and their barley is the only ingredient not grown in Virginia. As he shows off the Parrot’s Beak from the still that was handmade in Kentucky, Owen is a whirling dervish of bourbon knowledge.

One minute he is discussing how the color comes from expansion and contraction in the barrel, and the next he is explaining the minutiae of the washes and wines and heads and tails.

All the grains must be cracked, and then the corn is boiled for an hour before adding wheat and rye and barley. It cools for ninety minutes, and then the yeast is added. The yeast turns sugar into alcohol for five days, and then the wash goes in the still.

Several runs are made before the spirit goes into the medium-charred barrels to sit for several months and become bourbon. In Kentucky, the hot summers cause the caramel-charred oak to create the flavors and copper color that make many an evening worth savoring. We have plenty of heat in Virginia, but Ironclad’s location on the tip of the Peninsula, where the winds from so many roads blow, position it to age a bourbon unlike any other.

The family speaks fondly of a visit to the Reservoir Distillery in Richmond. They explain how you can taste the bourbon vapor in the air near the A. Smith Bowman Distillery in Fredericksburg, a meteorological angel’s share.

The Kings are hoping for a loan from the City of Newport News, a successful crowdfunding campaign, and a little help from the Virginia Department of Agriculture for using Virginia-grown grains. If all goes well they will purchase six stills and be able to produce enough bourbon to satisfy an ABC order.

Eventually they would like to give tours. Since the label was designed by oldest brother Ben, and his sister Kara is the Creative Director, this is truly a family-run business. As you might could guess, the state and federal permitting process is a bit arduous, but the Kings say everything is moving forward. So it shouldn’t be too long before we all can have a taste of their Virginia bourbon. First one is on me!