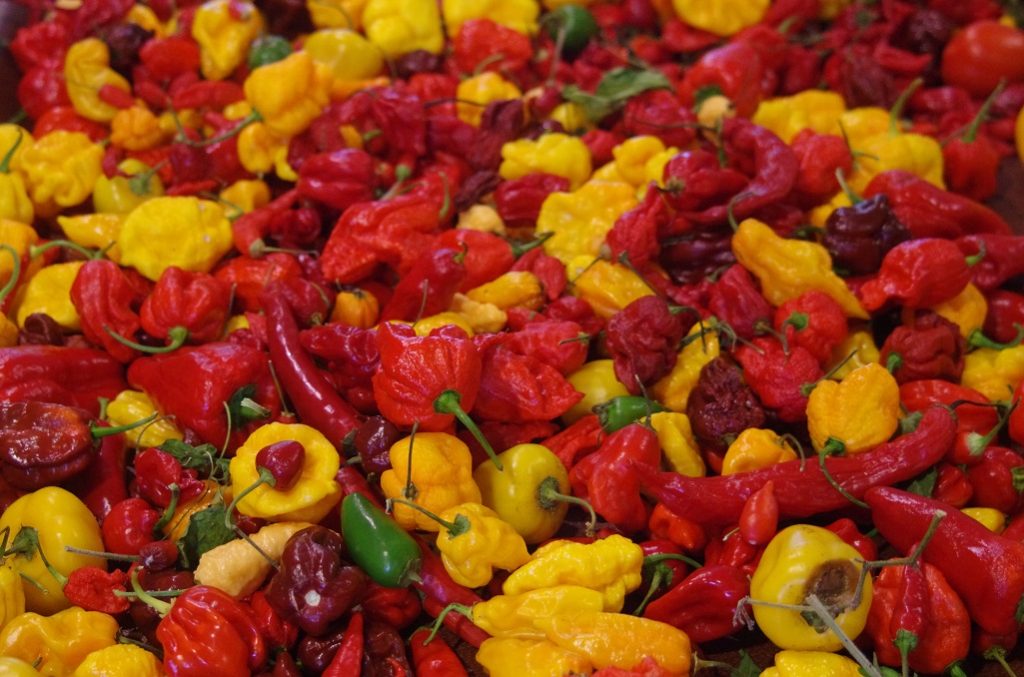 “Have you ever seen a tomato with peach fuzz on it?” said David Hunsaker, dressed in a “support your local farmers” t-shirt, as soon as he introduced himself.

Hunsaker, who runs Village Garden RVA along with Barbara Hollingsworth, picked one off the plant, extending his hand so the RVA Mag team could feel it on a recent trip to their Hanover County farm. 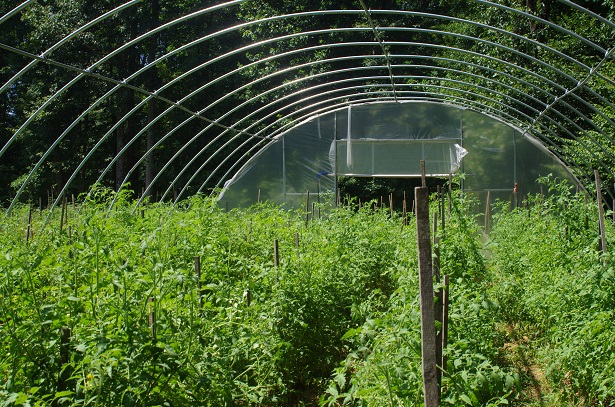 The two have been farming in their backyard for more than six years now. On a half acre alone, they grow all sorts of produce including berries, hundreds of tomato plants, herbs, and chiles from all over the world in a greenhouse they designed themselves.

Their garden has more than 150 varieties of tomatoes and 400 different chile plants. Hunsaker’s knowledge of his garden is as impressive as it is expansive. He can name any one variety of the thousands of plants their producing, tell you where its origin is, and describe the taste within seconds. 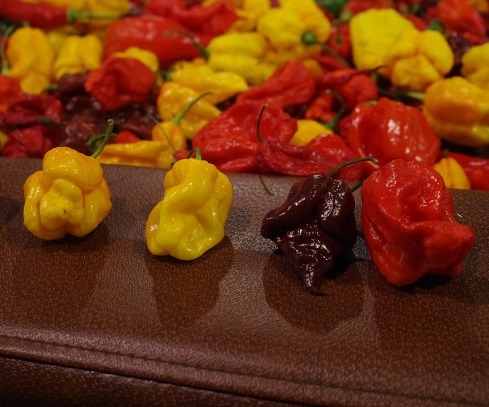 If you’ve eaten at a number of local restaurants, you’ve likely eaten a Village Garden tomato. Acacia Midtown, the Betty on Davis, Saison, Comfort, The Daily Kitchen & Bar, Pasture, The Roosevelt, Lemaire at the Jefferson, Quirk Hotel, The Savory Grain, Yellow Umbrella Provisions, are just a few of the Richmond eateries that carry their produce.

Lemaire Executive Chef Patrick Willis said he always looks forward to Hunsaker visiting with his tomatoes this time of year.

“You can tell he has a small business,” Willis said. “He takes a lot a pride in it.” 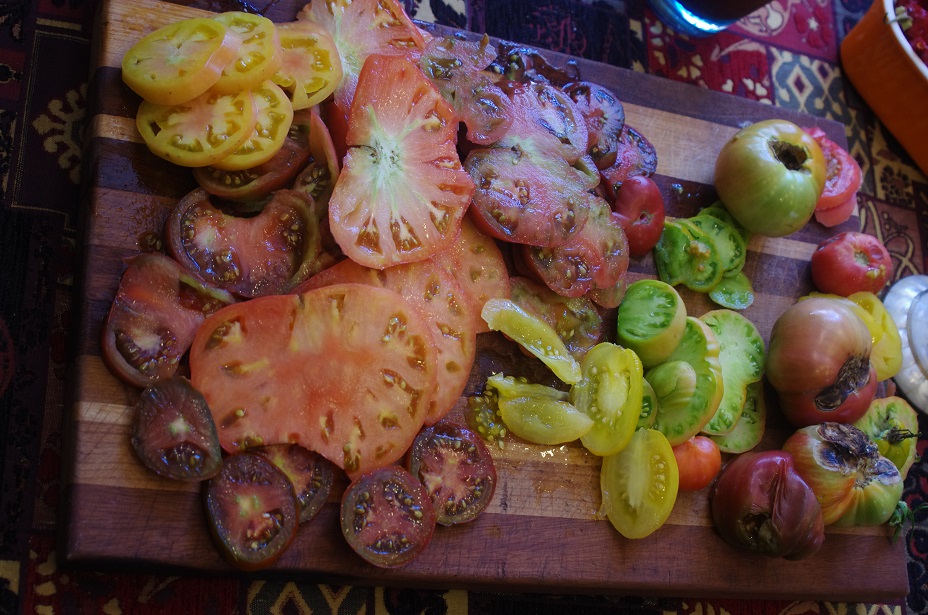 Willis said it’s just like shopping at the grocery store. Hunsaker pulls his truck up to the back of the restaurant twice a week and Willis gets to handpick the exact tomatoes he wants.

“There’s not a lot of times like that when you can pick up the produce you’re getting, hold it, feel and smell it,” Willis said. “I know I’m getting the best. There’s so many perks to working with local businesses.”

Big name local breweries use Hunsaker and Hollingsworth’s produce in some of their beers, like Hardywood’s first pumpkin beer and their chile beer or the Center of the Universe Brewing Company’s seasonal Monkey’s Uncle brew. 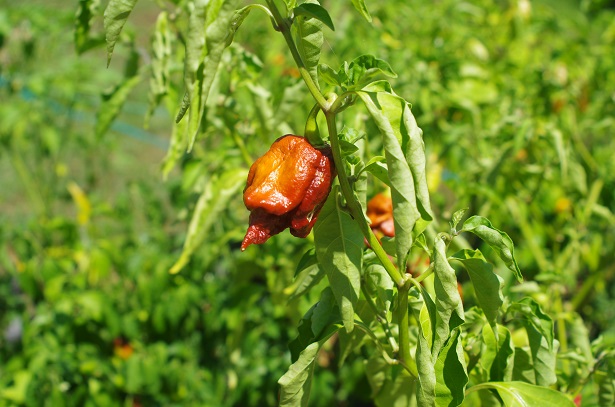 “We barter,” Hollingsworth said. “We refuse to accept money, but we accept beer and good wishes.”

Because Hunsaker and Hollingsworth harvest their produce every day, seven days a week, the tomatoes the restaurants receive were literally picked off the farm that morning. 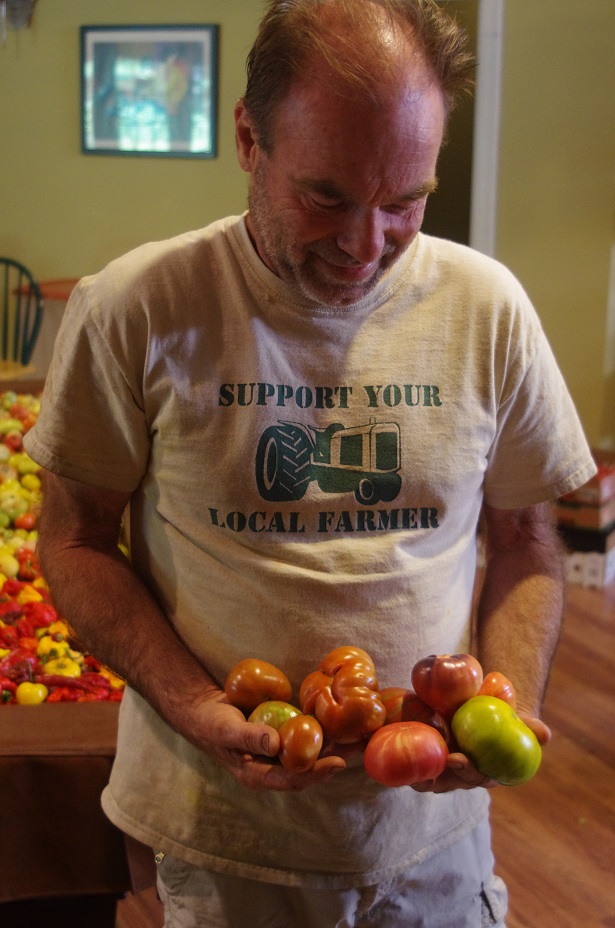 “We live an unusual lifestyle,” Hunsaker said. “We are pretty much here 24/7. I get up very, very early in the morning, I pick and do those sorts of things and Barbara takes care of the tomatoes and things in the house. We basically work pretty much until the sun goes down.”

Village Garden is all about being organic and sustainable. They don’t use any repellents or chemicals.

“The only thing on our plants are sweat and rainwater,” Hunsaker said.

Their most popular products, especially at the weekend farmers markets, are their dried seasoning blends made of the chiles. Right now they have six varieties like the Herb n’ Salt grinder or the spicier Spotted Dawg Hot Rainforest Chile grinder. 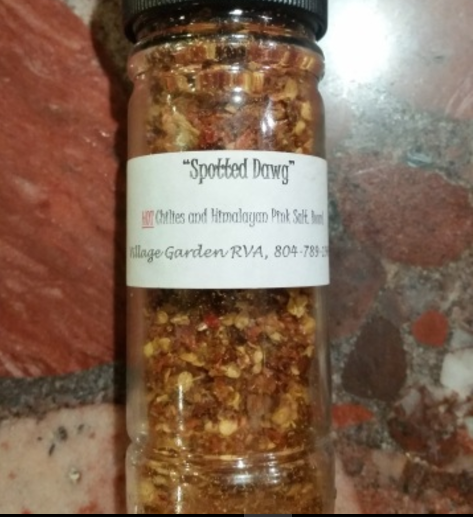 The grinders can spice up any meal, or even a Bloody Mary.

The couple walked us around the half acre of gardens. Hollingsworth even brought Madame Pompadour and introduced us. Madame Pompadour is one of the couple’s 35 ducks that run around the farm with their two dogs, four cats, and chickens. Her name comes from the fluff of feathers that sits on the top of her head, giving her a great hairstyle. 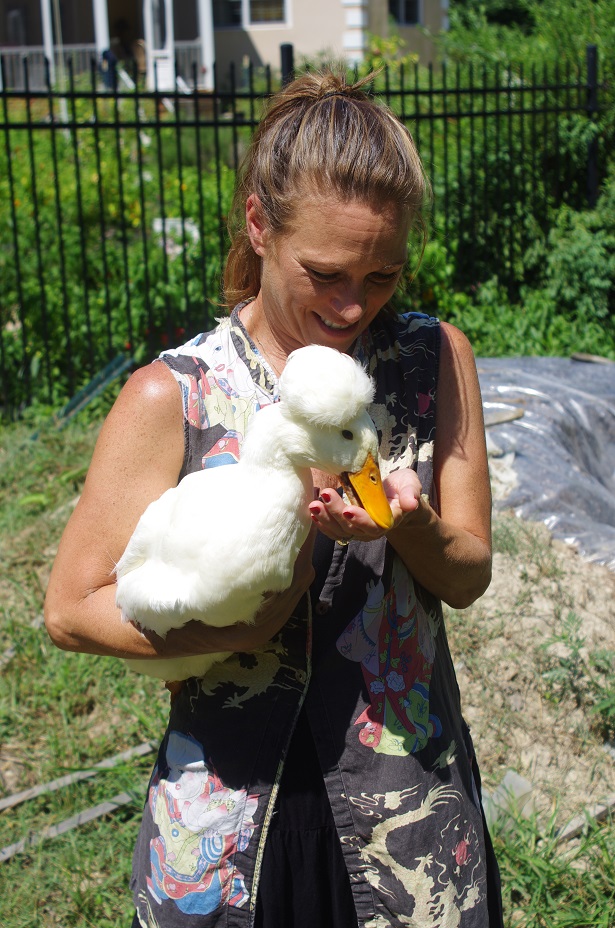 As we toured around with Hunsaker, he pointed out all of the different types of chiles, tomatoes, and other plants they’re growing right now. He paused every once in awhile, picking a bite-sized tomato or berry off the plant for us to sample. Each had a different fruity flavor.

For the grand finale, the duo laid out a spectrum of chiles from most mild to what Hunsaker called “peppers that will melt your face off” for us to try. Before we even sampled the first one, Hollingsworth set out an assortment of cheese to help counteract the heat we’d be feeling in the next few minutes. 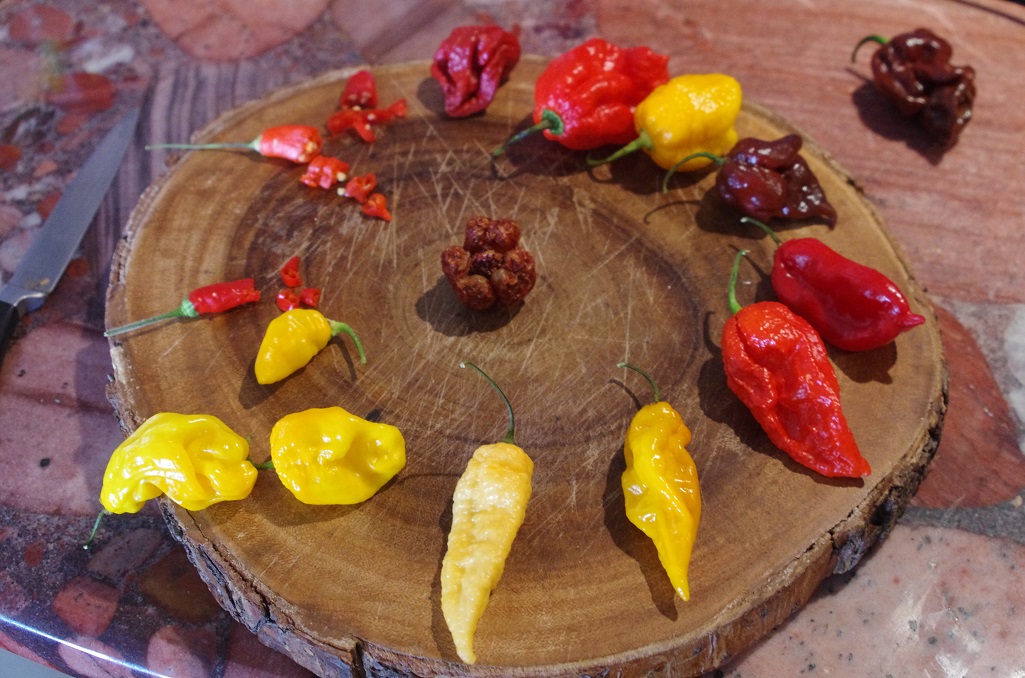 Hunsaker sliced the chiles with precision, cutting the smallest pieces off. He handed me the very tip of the chile each time, explaining how that was the part containing the least amount of heat.

The first pepper, an Inca Drop, tasted sweet like a bell pepper with a subtle heat at the end. Nothing unmanageable. As we tasted more chiles, like a Madame Jeanette Pepper and different classifications of 7 Pot peppers, the heat intensified. I had tears in my eyes at one point and Hunsaker handed us all paper towels for the beads of sweat collecting on our foreheads.

At the beginning, I strategically resorted to eating all of the chiles on the right side of my mouth until that side of my tongue grew numb, forcing me to switch it up.

Although a lot of people eat chiles for the heat factor alone, eating them back-to-back with Hunsaker explaining the details of each one helped me taste the distinct fruity flavor the chiles had.

We finished the tasting with a Carolina Reaper, a pepper that’s been deemed the hottest in the world. Hunsaker cut a piece so small it looked like a grain of sand. 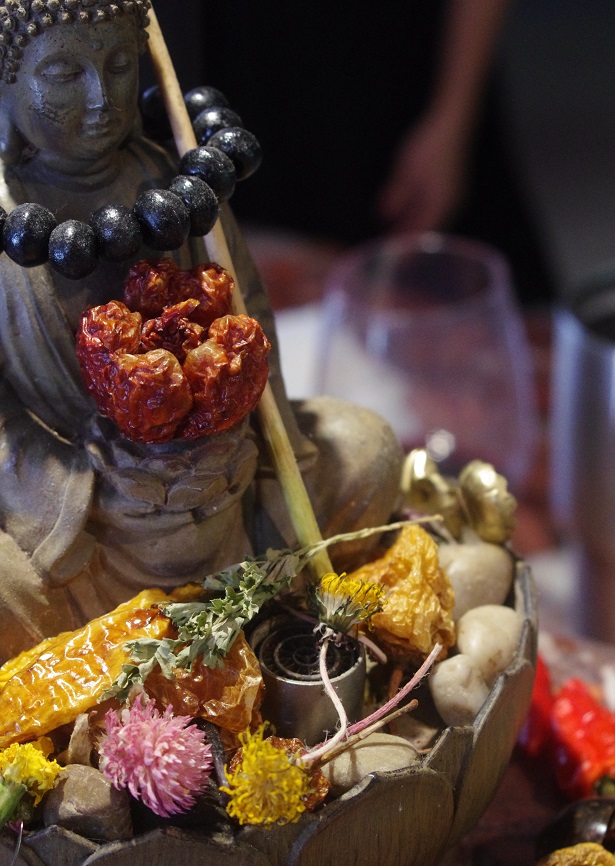 “Are you left-handed or right-handed?” he asked.

“Give me your left hand, then.”

I extended my pinky. Hunsaker shook his head saying I wouldn’t want the pepper anywhere near my fingertips. He placed the speck in the palm of my hand and instructed me to lick it with my tongue so I didn’t get the residue anywhere else on my hands.

They say slow and steady wins the race, and the Carolina Reaper must’ve listened. The heat wasn’t immediate, taking close to half a minute to finally appear, but once it was there you couldn’t ignore it. I think I ate three more cheeses after that and could still feel a soft burn in my chest the rest of the afternoon.

Other products Village Garden RVA produces range from a special-recipe kimchi to duck and chicken eggs. The couple makes their spices year-round, which are available at local farmers markets or online at their website. 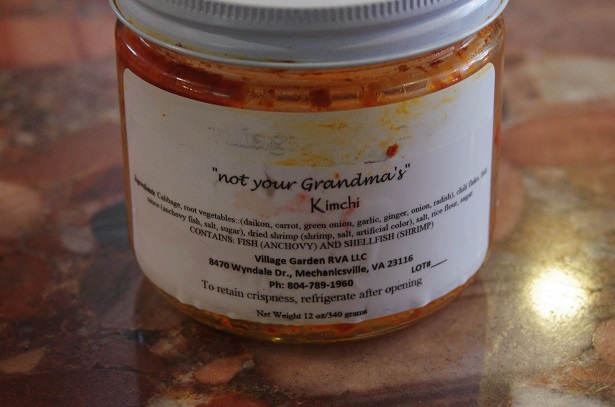 Hunsaker also raved about the health benefits chiles offer because of the active component capsaicin. Capsaicin is what causes the burning heat flavor and can trigger sweat.

“Capsaicin is a wonder drug,” Hunsaker said. “There are numerous studies in the mainstream medicine that indicate you will have a lowered mortality risk if you eat lots of chile.”

If that’s the case, this couple may live forever.

“You know you’re alive when you eat chile,” he said.