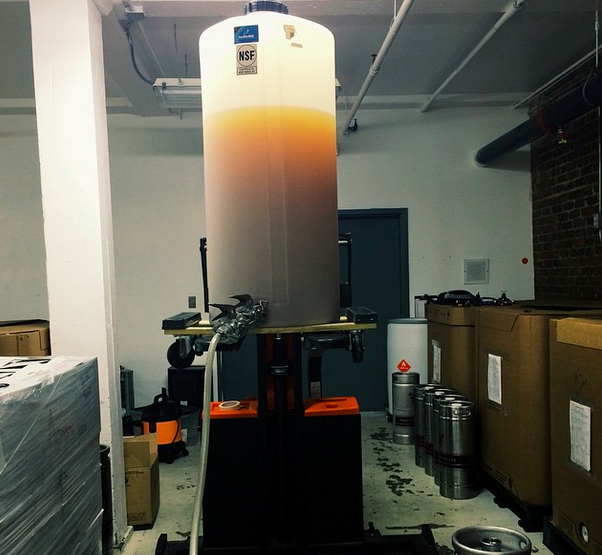 Cider is not brewed- its fermented.

Cider is not brewed- its fermented.

That’s something that Courtney Mailey, the owner, founder and head cider maker of Blue Bee Cider, kindly made clear to me. We spoke about the kickoff event this Saturday for the release of ‘The Compleat Cider’- a cider created from a recipe from the late 1700s.

The recipe was provided due to a partnership with the Virginia Historical Society.

“Three of the archivists came over one day and presented us with four different recipes,” Mailey said. “We had a look at them and decided on the recipe from The Compleat Housewife.”

The small batch cider is a delicious piece of interactive history. Those who choose to imbibe get to taste a recipe predating the ratification of the constitution.

“This cider is made from a recipe from 1782,” Mailey said. “It’s probably the first time anyone has made this cider in a very long time.”

Mailey said the cidery picked this recipe because it had the most detail, including what types of apples to use. The recipe even gave information about why each ingredient was picked.

Interpretation was still needed, but more steps and ingredients were laid out than the other recipes the Historical Society provided.

“It gave us more information to go on,” Mailey said. “It goes on today with recipes, there’s a certain level of knowledge that’s assumed, so they don’t include every detail of every step.”

Tools and practices for fermenting cider are different now than they were in the late 1700s, so some more work went into figuring out how to create the cider. Blue Bee cider maker Manuel Garcia took the lead on the project- taking it from Georgian era recipe to reality.

The Compleat Cider also includes raisins from South Carolina and a small amount of cane sugar. It is also barrel fermented, unlike Blue Bee’s other ciders.

“It was also our first attempt at a wild fermentation,” Mailey said. “We used wild yeast to start the fermentation and then followed it up with a wine yeast.”

The kickoff event is one of the few ways to taste this cider- its not going to be bottled because there simply isn’t enough of it. The cider will be on draft this Saturday, and Blue Bee’s ‘Cider Club’ members will be able to fill small growlers- nicknamed ‘squeakers’- at the event. The cider

Blue Bee’s normal ciders are bottled and sold in a way similar to wine. The cidery, located in Old Manchester near Legend Brewing Company, opened in 2013.

This Saturday’s event is the kick-off for their eight week summer music series. Each event will be held at Blue Bee’s cidery and will have live music and food- most weeks provided by Camden’s Dogtown Market.

The music for this Saturday’s event will be provided by The Cider Sippers. Further schedule is listed below.