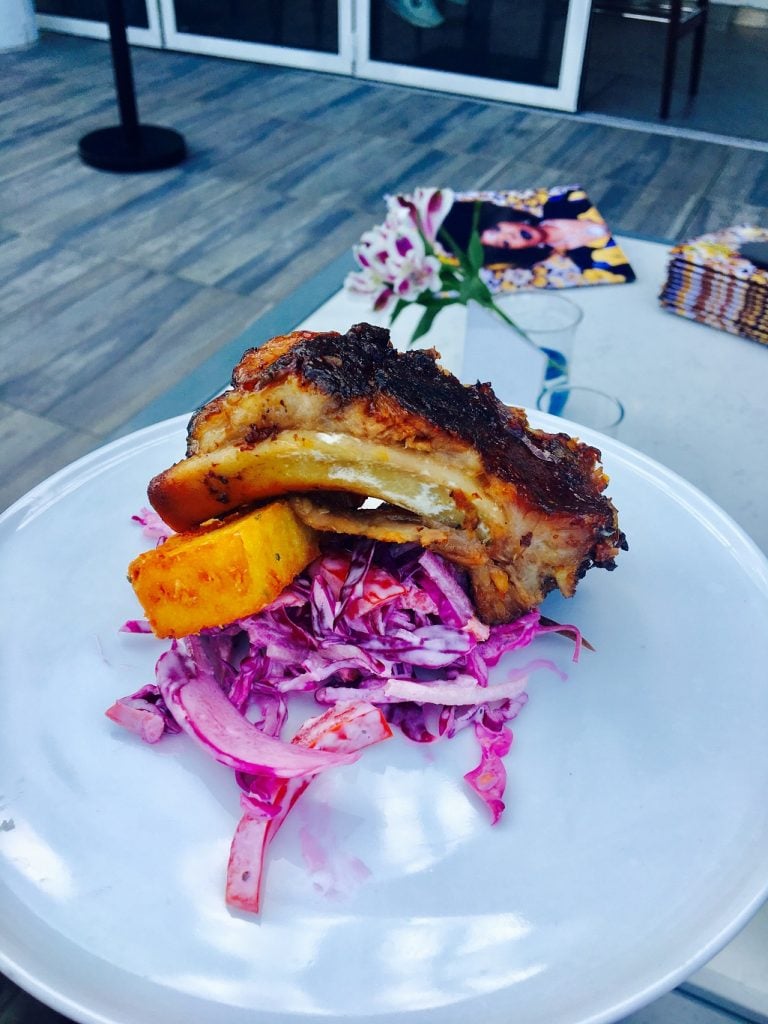 This week, the rooftop restaurant and lounge announced its revamp with a new menu and cocktails, with restaurant veteran Mike Ledesma at the helm as Executive Chef. 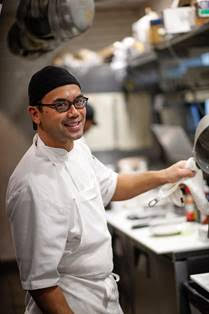 A former partner with Richmond Restaurant Group (RRG), Ledesma brings over 16 years of experience to the rooftop restaurant and lounge. Enrolling in culinary school in 2000 in Hawaii, the new chef moved to Richmond in 2011 and opened The Hard Shell, a part of RRG. He’s since opened French/Belgian restaurant Max’s on Broad, relaunched Patina Restaurant and Bar, and in 2015, he returned to RRG as Corporate Executive Chef for the menu development for The Daily Kitchen and Bar, East Coast Provisions, Pearl Raw Bar, The Hill Café and both Hard Shell locations.

On Wednesday evening, RVA Mag had a chance to try out some of Ledesma’s dishes that are featured on the menu. Now to be fair, this was my first time at Kabana so I didn’t have anything to compare it to so I can’t speak on the menu prior to Ledema’s arrival, but all of the dishes we sampled at Kabana were excellent, creative, and presented with flair.

When we first sat down, we were greeted with crab gazpacho. Gazpacho isn’t something I usually order when I’m out, not because I don’t like it, just not something I tend to go for. Anyway, this little tiny dish was full of flavor and I wish I had more of it. The gazpacho, made up of tomato, cucumber, and red peppers, was spicy and the huge chunks of crab meat coupled with their house white wine started off the tasting right. I loved the spice and the crab meat was tasty. This is a perfect summer dish to cool you off without feeling too full. 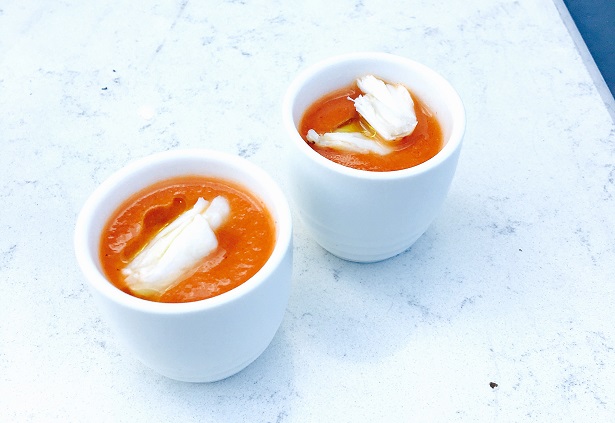 Next, we enjoyed ribs, with a potato croquette and jicama slaw. Unlike my fiance, I’m not as bbq-obsessed as he is, but these were delicious. Falling off the bone and packed with flavor. The combination of the tender meat, with the crunchy potato cake and fresh, light slaw made for a superb combination. 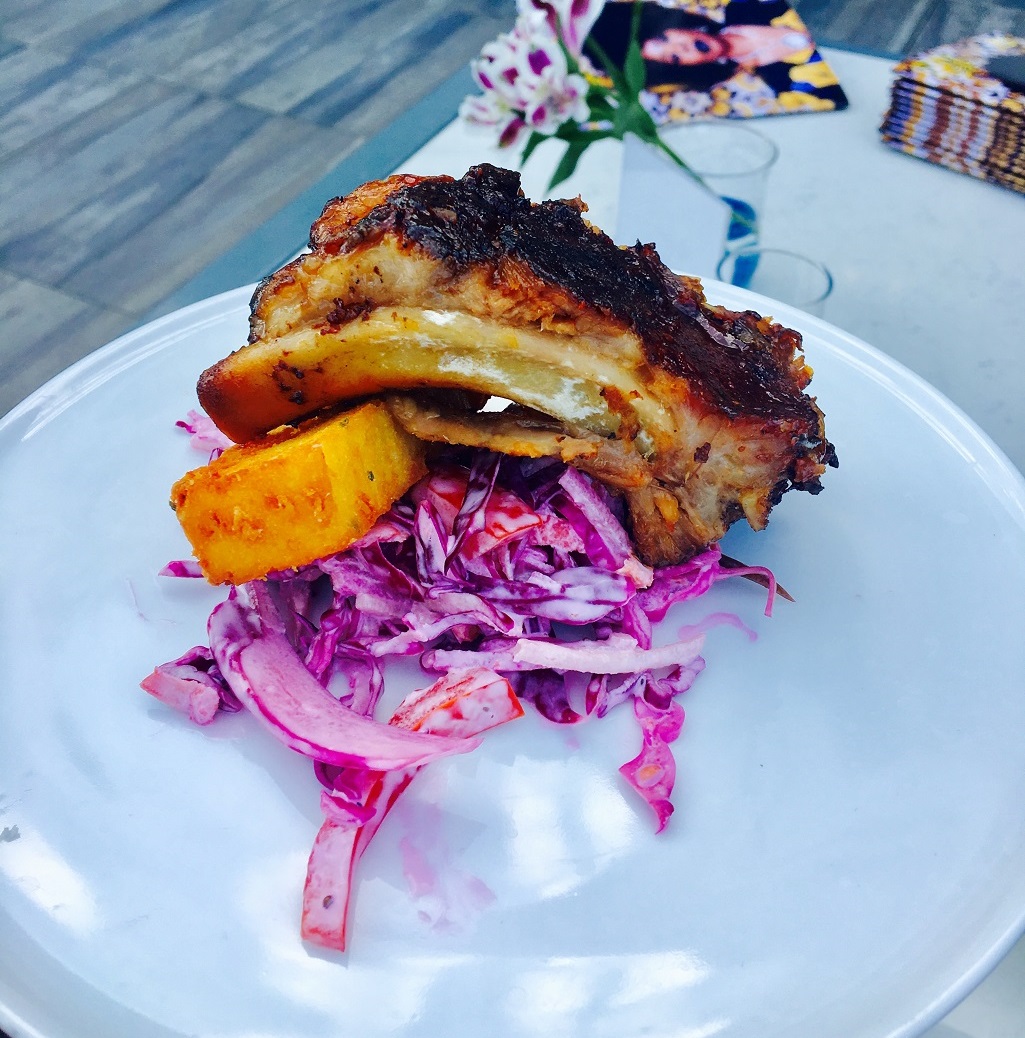 My personal favorite of the night was delivered to our table after the ribs. Chili-lime mussels with coconut curry, red peppers, and basil. I could have eaten this all night. The broth was delicious and the bread they served with the mussels was great for sopping up all the leftover broth once we’d finished the mussels. The mussels were tender and the red pepper sweetness paired with the velvety, spicy curry broth and the mildness of the basil made for a myriad of flavors dancing around on my tongue. A stellar dish and one not to miss if you go to Kabana. 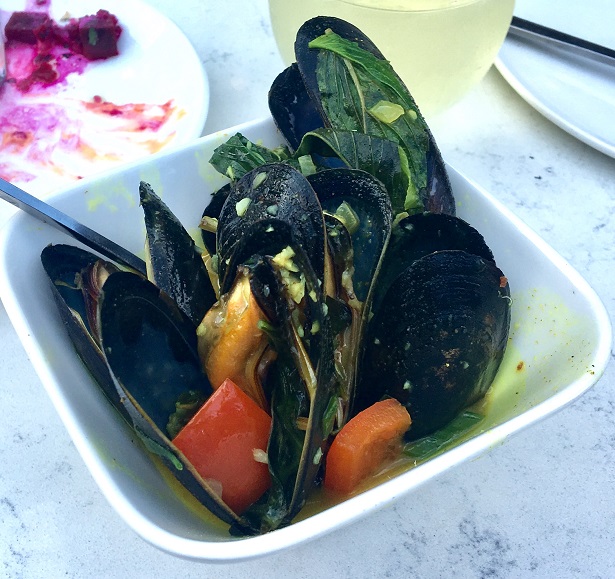 After the mussels, we were brought a colorful, eye-catching tuna poke bowl. The ahi tuna was the star obviously, fresh and tender, but the crunchy sesame seeds, seaweed and chili aioli held their own turning this into not just a delicious one, but a fun one to eat with so many textures and flavors. I don’t like avocado, so I let it be, but my fiance thought it was a nice refreshing touch to the dish. And I could put chili aioli on anything, so that really made this dish for me. 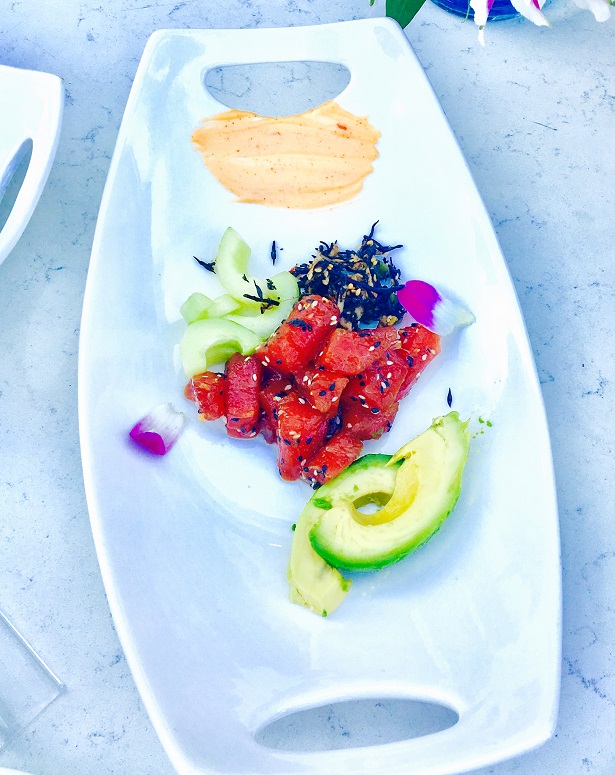 Normally, I don’t order lamb when I go out, but right away, when the tandoori lamb was brought to our table, I was curious. The spices on the lamb were wonderful and the meat was tender and juicy. It came with a house-made tzatziki sauce that cooled off the palette and made me want to keep going back for more. The lamb came with a side of green tomato mint chutney and I don’t like mint, which I know is standard with lamb, but the chutney paired nicely. The accompanying glazed carrots were crunchy and I don’t know that they necessarily fit this dish, but they were good. All in all, a good dish! 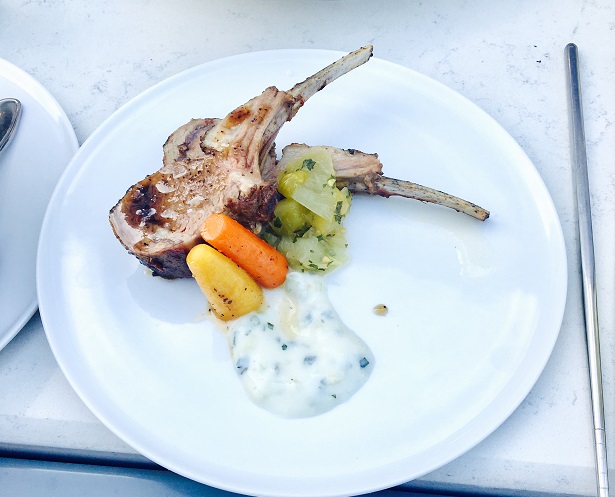 The next plate came, and it was just as interesting and flavorful as the last. Hush puppy fried oysters with a cornmeal crust were paired with a bright, summery succotash and chili vinaigrette. The succotash was super yummy and the vinaigrette seemed like a great pairing, not too heavy, but still tasty and brought flavor to the oysters. There was a splendid marriage of salty and spicy. Good little appetizer to start off your night. 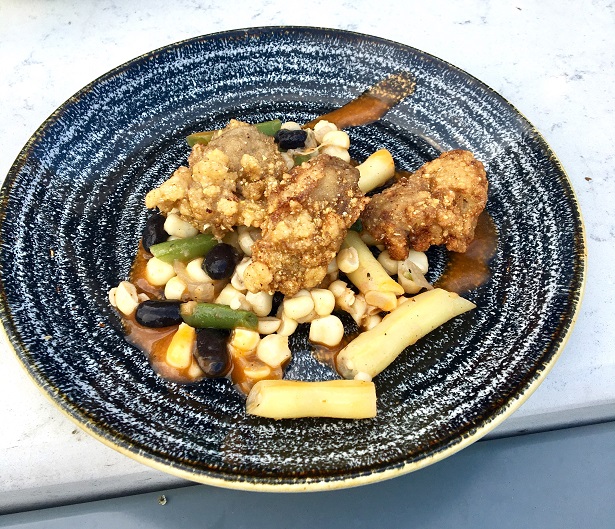 We received Mango Jalapeno Ceviche for our next dish, which I think came out earlier before we got there as a small plate. As you can see from the photo, a lot going on here and very eye-catching. However, I wasn’t as crazy about this dish as much as the other ones, the fish tasted a little off to me, but the spicy jalapeno and bright and citrusy mango came through strong and made up for the fish so dipping the chips into that was very good. 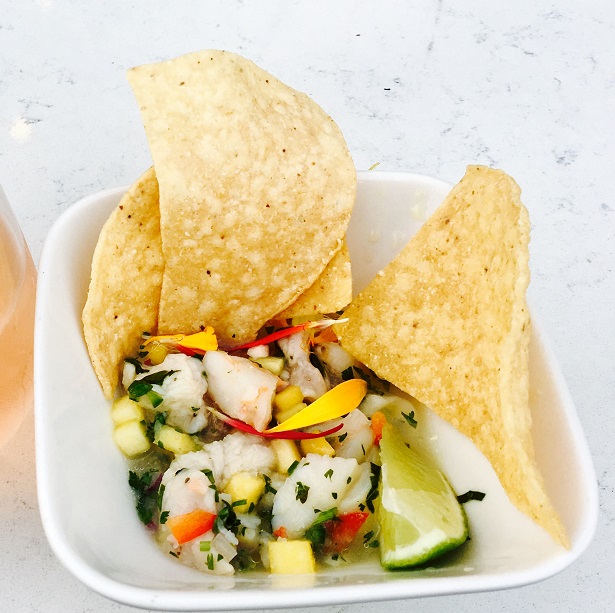 For Kabana Rooftop’s final dish, we were brought beet tartare which was a delight for the eyes and my taste buds. It was so cute the way it was presented I didn’t even want to eat it, but of course I had to dig in. With the lemon, creamy, but light goat cheese topping paired with the mild beets it was a tasty dish and a great palette cleanser after all the food. Not sweet at all, but the dish offered a variety of flavors and textures between the soft goat cheese, and “lovosh”, a small, crunhcy, flatbread served on the side that paired nicely with the beets. 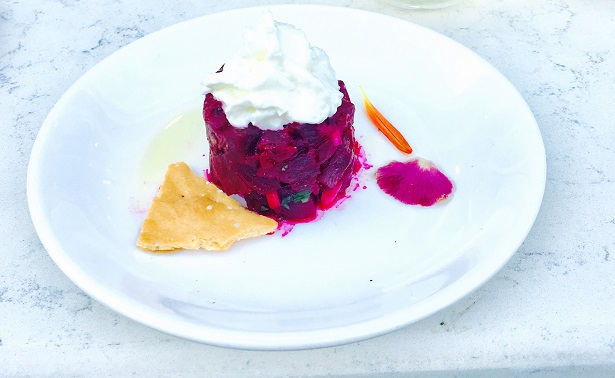 Oh, we were also treated to a delicious charcuterie and cheese board as well, but unfortunately I ate that so fast we didn’t get a good picture. But make sure to try that out.

This new chef and new menu coupled with the amazing views of downtown Richmond, really take Kabana Rooftop to the next level. If you haven’t already, head to the restaurant/lounge to check out what this new chef is serving up!