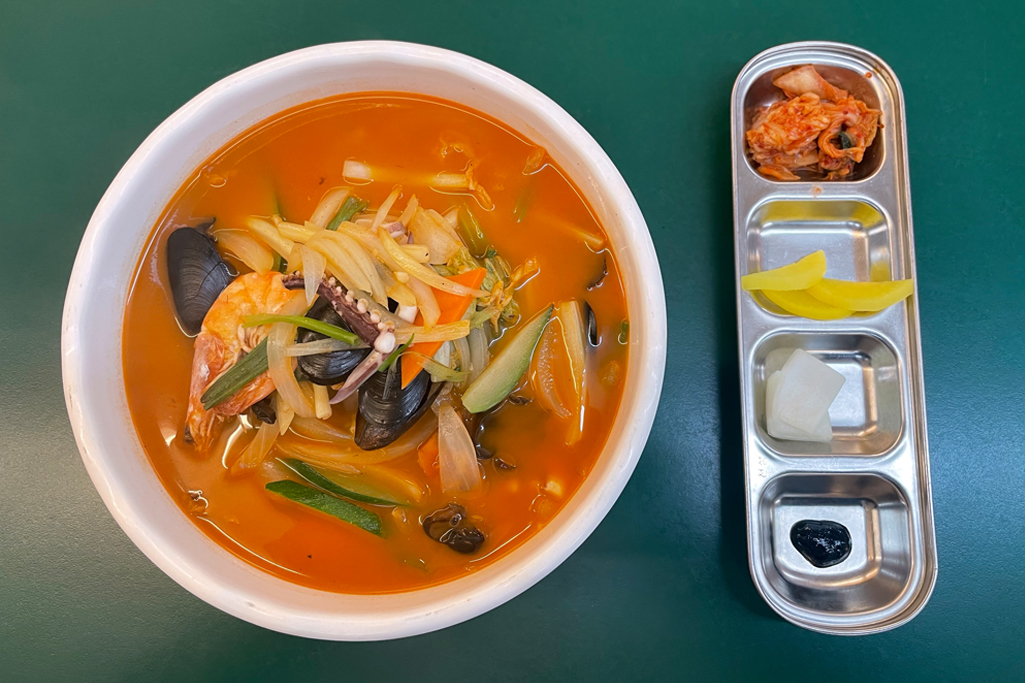 My name is Matthew Park. Park is the third most popular Korean surname. I’m not Korean, but I’ve been mistaken many times in my life. I’ve received Korean junk mail and Korean robocalls. I’ve wondered how many people assumed I was Korean when I sent in a résumé or a college application. But no; my father’s family is Jewish. A few generations ago they came through Ellis Island into New York City from what was then the Soviet Union. No one knows what their name was before it mysteriously got turned into Park. I assume the records were lost in the ashes left by the hideous Third Reich. However, I do really like Korean food, and I’ve been going to Noodles & Friends to eat just that. I have not gone with friends, though. Unless I consider that the noodles themselves are my friends; and in many ways, they are. Noodles have been there for me while I was lonely, living in so many different places. They brought me new neighborhoods to explore. They have comforted me when I’ve been sad, or sick. They’ve filled my stomach when I’ve been hungry and poor.

There are two locations of Noodles & Friends, both housed inside a New Grand Mart. There’s one on West Broad Street, and one in Southside on Midlothian Turnpike. It’s exciting to eat inside these massive Asian supermarkets. They’re filled with so much life and energy. Often being there feels as though I’m in another city, or another country, surrounded by a great diversity of people. The New Grand Mart is spectacular. They have everything in there. One could easily spend an hour roaming the aisles. On my most recent visit, I took notice of their selection of Lay’s potato chips, with varieties you will not find in any American grocery store. Want some black truffle, hibiscus and sakura, or butter fried matsutake flavored chips? You know where to go. 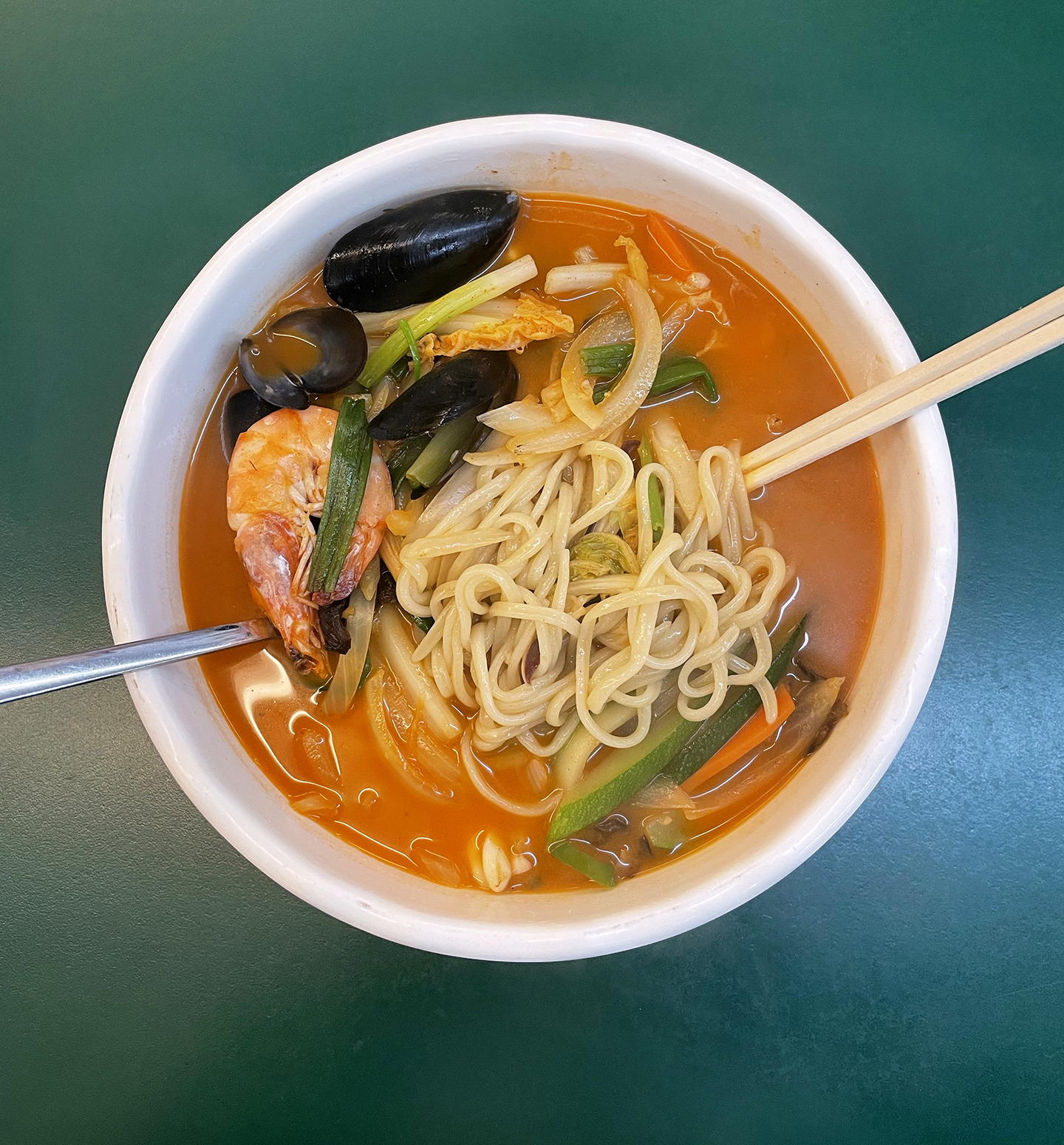 It’s been tough to decide what dish to write about from Noodles & Friends. Everything I’ve had there has been so wonderful. I decided on one of the most popular bowls of noodle soup you’ll find at any Korean restaurant: Jjampong. If you google this you’ll find a few different spellings. Wikipedia has it as Jjamppong—two Js and two Ps. There you can read about its Chinese origins. It seems many Asian dishes originate there, get adopted by another culture, and transform into something a bit different.

Jjampong is essentially a spicy seafood noodle soup. I asked the owner of Noodles & Friends what the broth is made from. She basically said chicken and beef bones, with a bunch of seafood thrown in there. Seoyoung Chae is her name. I had her write that in my tiny notebook. She has nice handwriting. She came here from Korea, and she’s hard to get ahold of. She opened the first Noodles & Friends on Midlothian Turnpike in 2015. She’s always back and forth between her two restaurants, and she always seems very busy. The two times I was able to speak with her she was very friendly, but shy, and insisted that her English is not very good. She might be right about that, but as often is the case, it’s better than she thinks it is. Chae, by the way, was the surname of a childhood friend of mine who passed away while we were still very young. This made me think of him again, and I couldn’t help but wonder if they were connected somehow. Of course, it’s highly doubtful, as Chae is the fifth most popular Korean name. 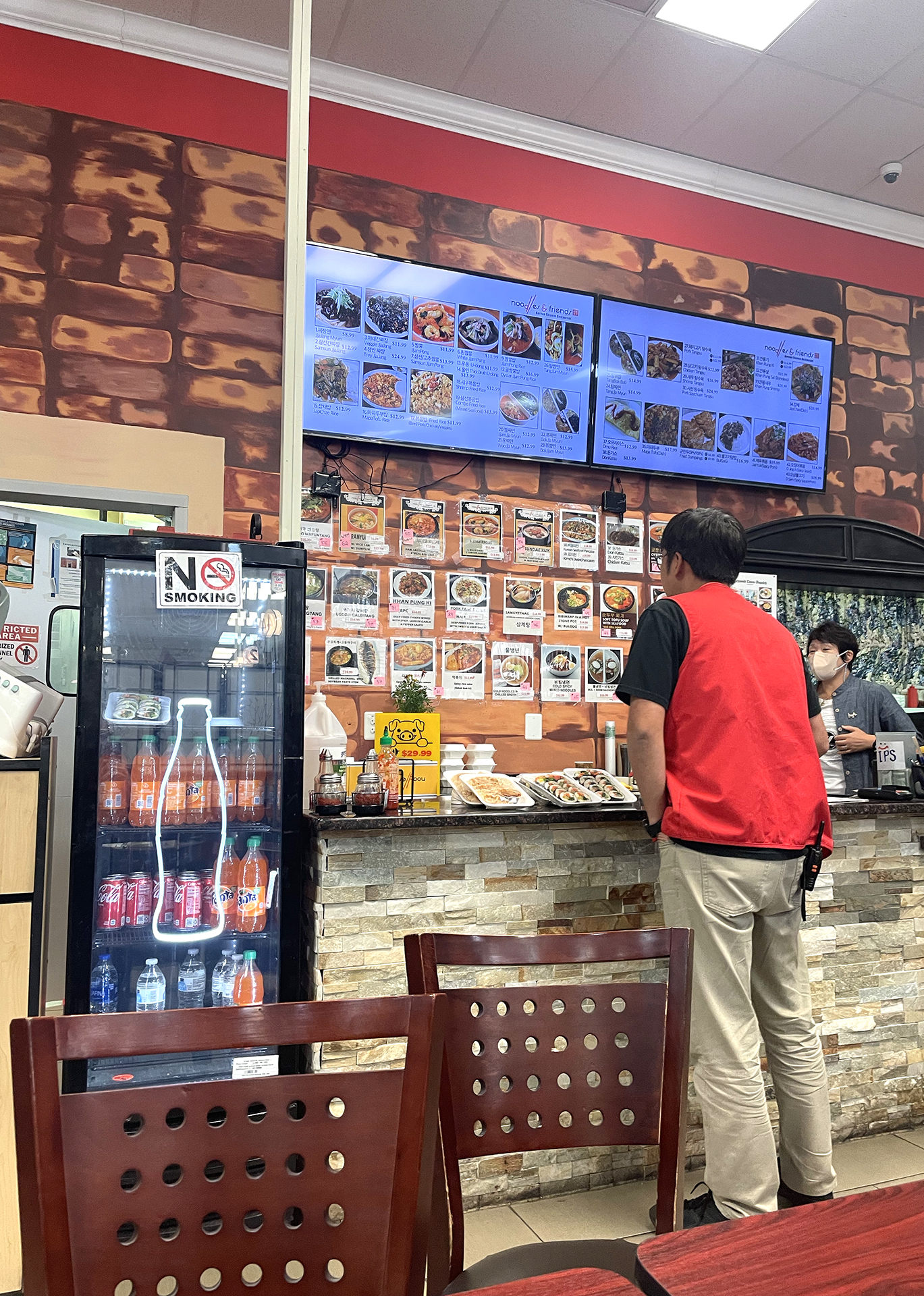 Inside the Jjampong, you will find a wide assortment of items. You’ll see mussels, squid, an unpeeled shrimp with its head attached. You’ll see carrots, zucchini, white and green onions. You’ll see black mushrooms, jalapeños, some cabbage. I bet my bowl had fewer jalapeños because I ordered it mild. I assume that means it had less Gochugaru, less chili oil, and whatever other spices they dump in there. If you’re into spicy foods, you’ll probably be okay with it as it comes. You can probably order it extra spicy too. And guess what else you’ll find in there? Noodles! And they’re fantastic. They’re made in-house, as all good noodles should be. They’re very long, seeming to go on forever. They have a perfect texture and perfect chewiness. They’re a joy to behold.

It’s a fun bowl of soup to eat. It’s an adventure, really. Crank open a mussel shell with your cheap wooden chopsticks. Figure out how to peel and eat the shrimp while it’s covered with hot broth. Notice the suckers on the little squid tentacles. Wonder what those near spiral-shaped, rubbery morsels are. Drink the broth with the long-handled steel teaspoon. It’s a fraction of the size of those plastic phở spoons. You’ll put lots of those teaspoons in your mouth. At some point you’ll say screw it, and put the bowl to your face and drink away. No shame! You’ll wonder in what order to eat the Banchan, the little side dishes that always come gratis with Korean entrees. At Noodles & Friends it’s always been kimchi, pickled radishes that are somehow bright yellow, little squares of white onion, and a small dollop of what I think is black bean sauce. 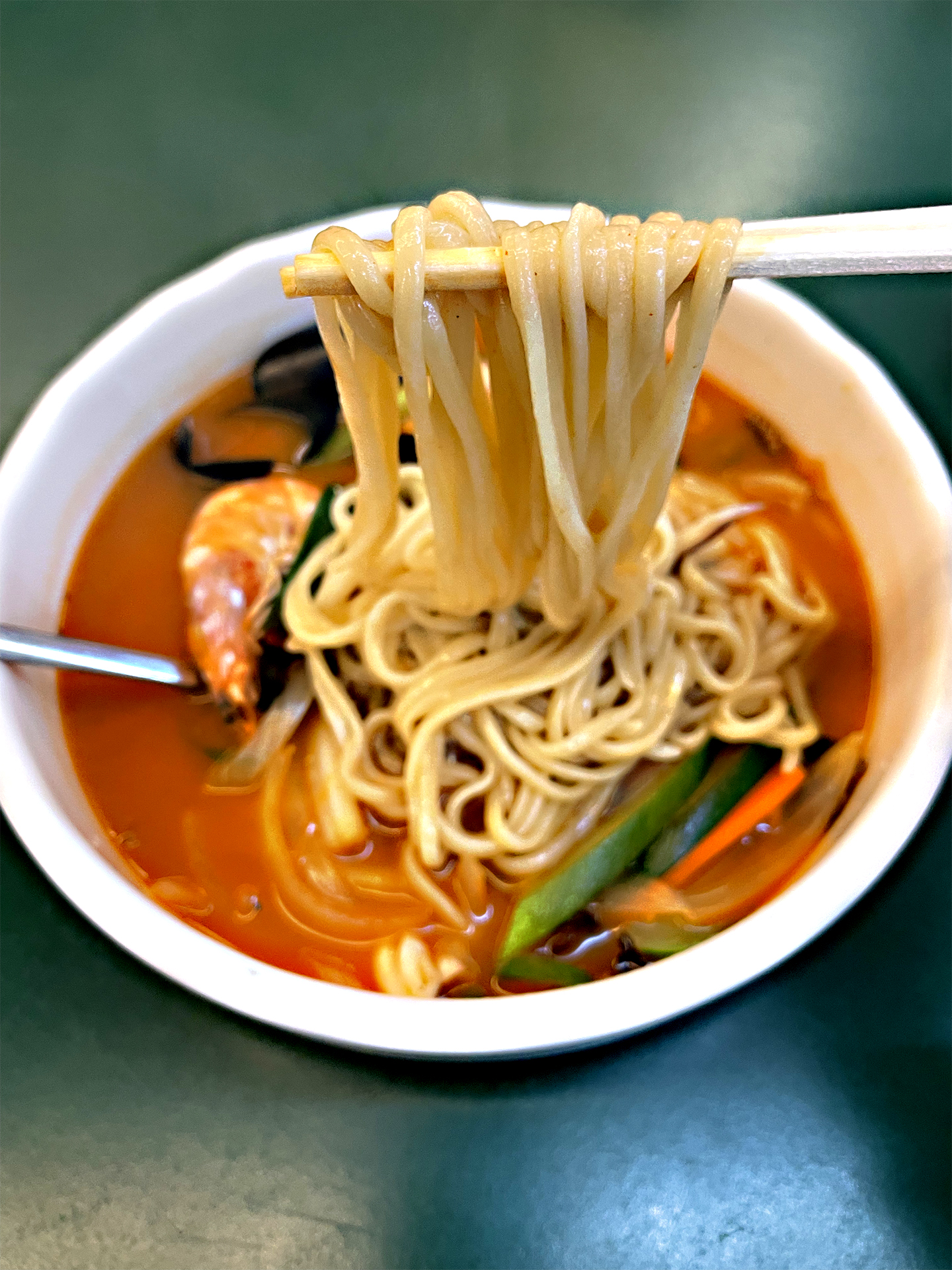 I can’t just sit on some of their other dishes. There’s also a White Jjampong, which is very similar, but without any spice. I liked that quite a lot, and would probably order it next time over the red Jjampong. There’s a softness to it that I really enjoy, and without the spice you can taste the broth in a more unadulterated form. At some point you simply must try the JjaJang Myun, another dish with multiple spellings. This one has no broth. It’s just their delicious noodles covered in that scrumptious black bean sauce, with pork bits and loads of white onions. There’s a vegetarian version as well, with zucchini instead of pork. It’s very good; and such a carb bomb that you might need a nap after you eat it all because you couldn’t stop yourself. Luckily it comes in two sizes. I got the smaller one. The Jjampong also comes in two sizes: medium and large — no small. I get the medium and I’ve never been able to finish the whole thing. It’s so much food!

I look forward to more trips to whichever location. West Broad is quicker for me to get to, so I imagine that will be my preferred location. But the Midlothian Turnpike shop certainly has its charms. The menu is the same at both locations, and has plenty more dishes I need to try. They even have these split bowls — combo meals, essentially — where it’s half one dish, half another. You can get half JjaJang Myun and half Jjampong. It’s brilliant. Of course, I’d love to try their other Korean staple dishes, such as their BiBim Bab, Bulgogi, and tofu soup. They make Japanese Omurice as well. Maybe I’ll order that someday. I really look forward to trying their spicy beef soup with rice. I’ll ask for it mild. And heads up, vegetarians, they have a whole section of the menu for you. 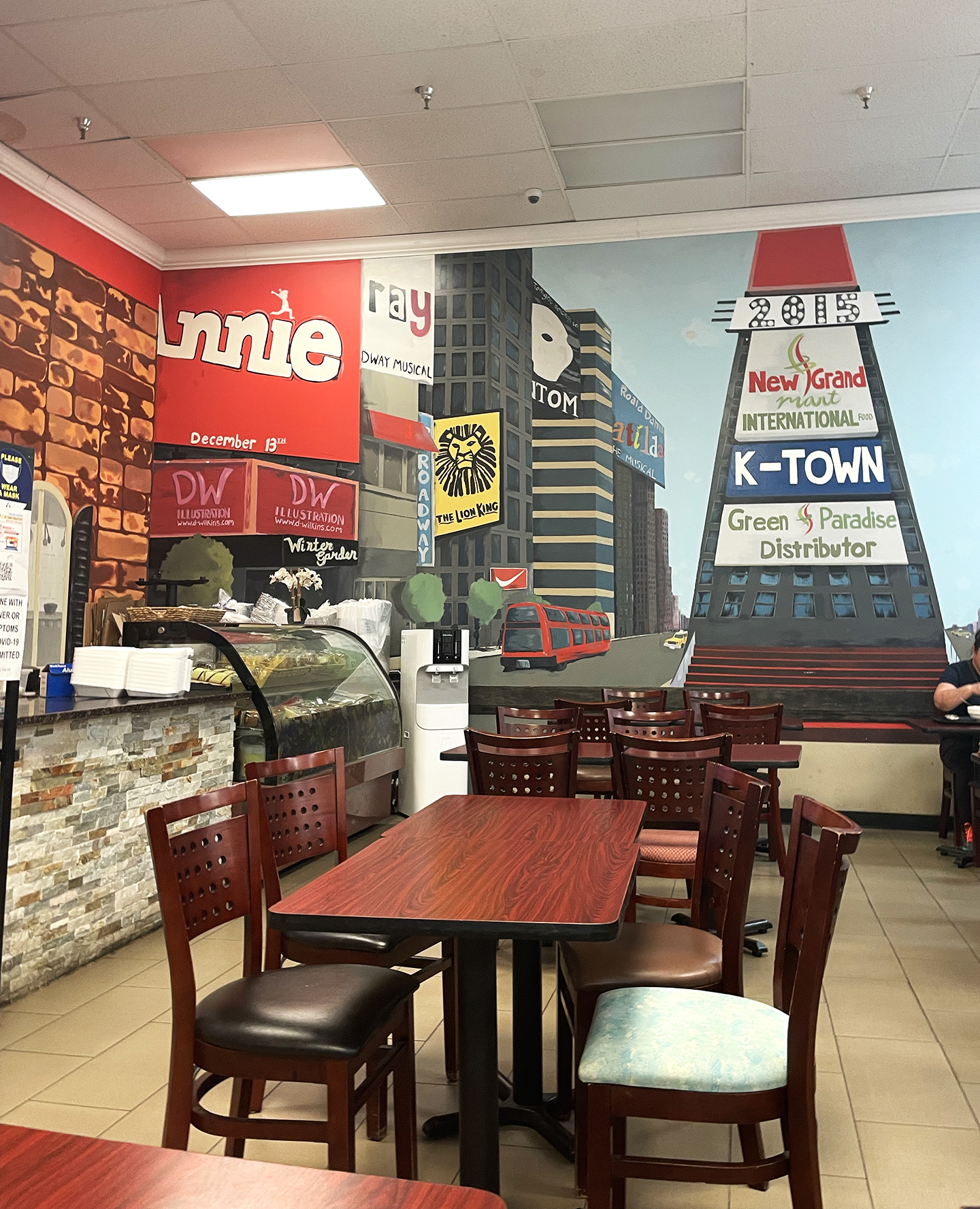 Whatever you try, I do highly recommend Noodles & Friends. I suggest you come hungry, eat in the restaurant, and notice all this things surrounding you as you slurp away. Over there are several flavors of Mogu Mogu, the sweet drink you chew. Over there are massive boxes filled with instant noodles. And what kind of fruit is that over there? Then try to walk off your meal around the store. You’ll be amazed at all the interesting items you will continue to find. Oh, and if you get cold easily, like me, bring a sweater, as it’s always chilly. I went on a 75º day recently, and gladly wore a flannel and beanie inside. The soup will definitely warm you up though, no worries.

Noodles & Friends is located at 7415 Midlothian Turnpike and 9035 West Broad Street, both inside New Grand Mart. 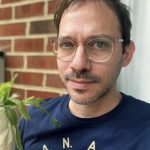 In April 2022 musician, artist, weirdo Matthew Park returned to Richmond after many years of being wild in the Triangle area of North Carolina; Los Angeles, California; Berlin, Germany; Portland, Oregon; or somewhere else. At some point in the past he had earned a BFA in film from VCU. Currently he's paying his rent by working in live music, so if you go to a lot of shows, you might end up seeing him.