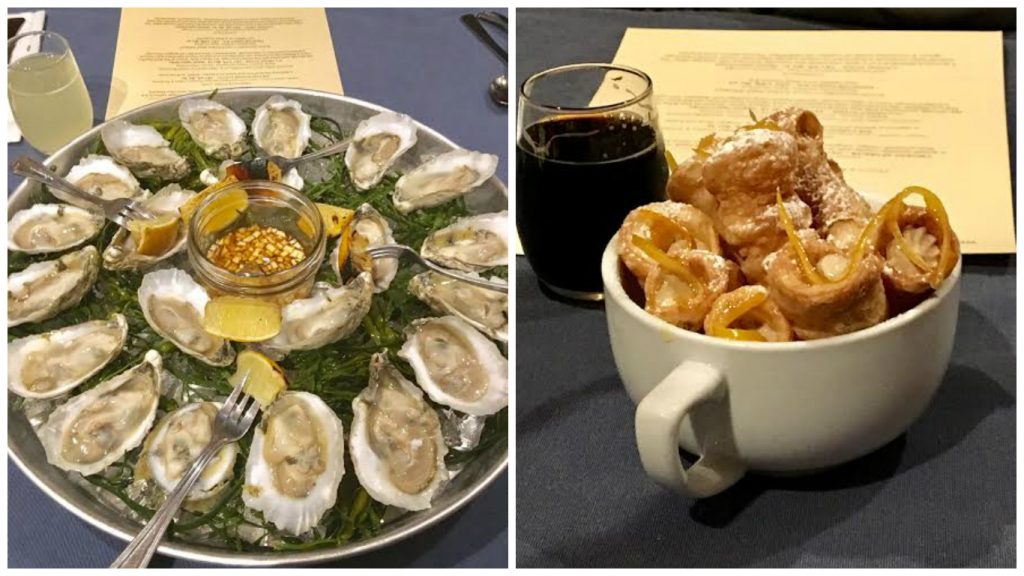 Until this Monday, I’d never been to a beer dinner before. I always wanted to, I mean food from a local fine dining restaurant and craft beer to go with each course, what’s not to like? So when I had the chance to attend Garden Grove Brewing Company’s beer dinner this month, I agreed, and I’m so happy I did.

Until this Monday, I’d never been to a beer dinner before. I always wanted to, I mean food from a local fine dining restaurant and craft beer to go with each course, what’s not to like? So when I had the chance to attend Garden Grove Brewing Company’s beer dinner this month, I agreed, and I’m so happy I did.

Every month for the past year for their Taproom Dinner series, the Carytown brewery has hosted a beer dinner featuring five courses of seasonal cuisine from a local chef paired with a 5 ounce pour of five of their craft brews.

This month featured chef Kevin Church of Postbellum, a restaurant that opened up at 1323 W. Main St. in the former Mulligans space in 2013.

I’d visited the restaurant’s rooftop space for a few drinks before and dined once, but never had an experience like I did on Monday. Their food was simply incredible, from appetizer to dessert everything stood out in my mind and had my boyfriend and I raving even after we got home.

But let’s back up a bit. For those who haven’t been to a beer dinner, you walk in and sit down family style with other hungry attendees and craft beer lovers and grab a drink and chat while you wait for your food to arrive, course by course, beer by beer.

The atmosphere was warm, friendly and laid back so if you’re hesitant to go to one of the these because you think you have to get all fancy, fret not. It’s casual and the owners behind Garden Grove Brewing Company went above and beyond to make sure everyone felt at home, comfortable and had a good time. They close down the brewery for these events, and fill up every table and just from chatter at our table, it seems these beer dinners have grown in popularity since Garden Grove started them.

Even the chefs and owners came around to each table doing a few of the courses to chat with us and make sure we were enjoying our food. Nice touch.

To start us off and get our tastebuds going, a jar of peach and bourbon candied cashews and pecans were brought to the table. Sugary and sweet with a little tang. Perfect to curb your appetite until the bigger courses start to arrive. I apologize this was the only item I didn’t get a picture of because I was just too excited…and maybe hungry. I washed it down with Garden Grove’s Virginia Sparkler, a light,crisp citrusy drink which oddly enough happened to be the first beer that was served with our first course.

So this was one of my favorite courses, just because I am obsessed with oysters. I can’t get enough. As soon as I saw that they were listed on the menu I was already a happy camper. They came to the table served on one big tray, (wish I could have them all to myself) accompanied by a delicious Honey-Ginger Migononette and burnt lemons that I liberally doused all across the oysters for everyone. 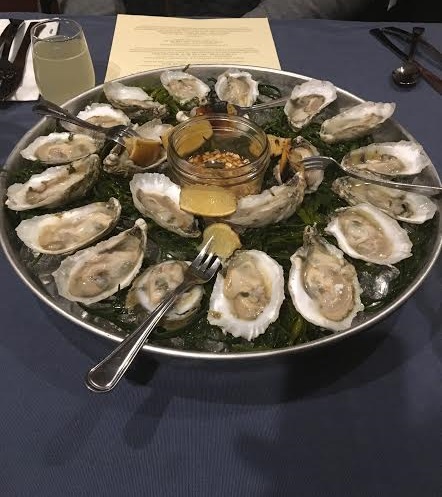 The oysters were somewhat salty, but had a bit of a bite to them and mostly sweet making the Virginia Sparkler’s citrusy notes a perfect pairing for this dish. The ginger stole the show in the migonette sauce that we put on our oysters, it was sweet, but with a big kick from the ginger. The honey in the sauce, paired with the oyster and washed down with the light honey in the 6% Virginia Sparkler was the perfect combination. The oyster helped to bring forward all of the flavors of the sparkler as well. I could go on and on about oysters and this dish, but I don’t want to bore you I’ll just make you drool with the photos. 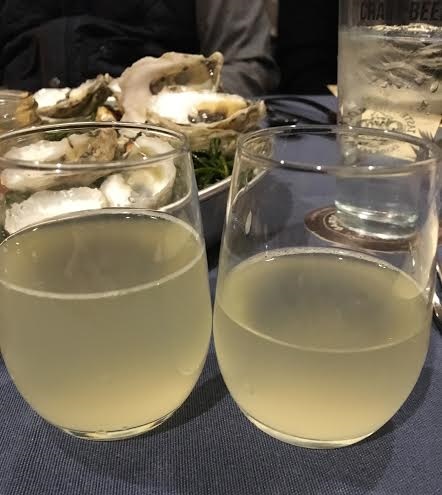 Okay, talk about explosion of flavors. There was so much going on in this dish each bite was a bit different and exciting. The pork was cooked well, tender and had a bit of a smokey taste, pairing nicely with the rye-based saison. The green apple curry was spicy and packed a ton of flavor and accompanied the pork tremendously well when eaten together. I think the star of the dish were coconut-poached parsnips if I dare to say it. Usually its the main course, and while that was delicious, how they got these regular old parsnips to taste rich and sweet enough to steal the show I’ll never know. Combined with the spicy curry and topped with a pickled red chile, perfection. The 6% saison’s fruity, but subtle notes helped to balance the meal out and not too heavy so we could venture on with the rest of the dishes. Dipping the pork into the curry and topping it with cilantro was a delicious blend as well. Compliments to the chef for incorporating so many delicious and vibrant colors and flavors into one dish.

So my other favorite dish. I know, not a main course, but this was so delicious and different I could not get enough. GG’s It’s About Thyme is a collaboration with the TEDxRVAWomen “It’s About Time” event held at the Byrd Theatre. The Belgian ale uses lemon thyme and elderflower from Tricycle Gardens which paired nicely with the fresh thyme and other herbs in the dish. So I wanted to save it until the end, but the Parmesan crisp/wafer that adorned the top of the dish was just too delicious I couldn’t wait. 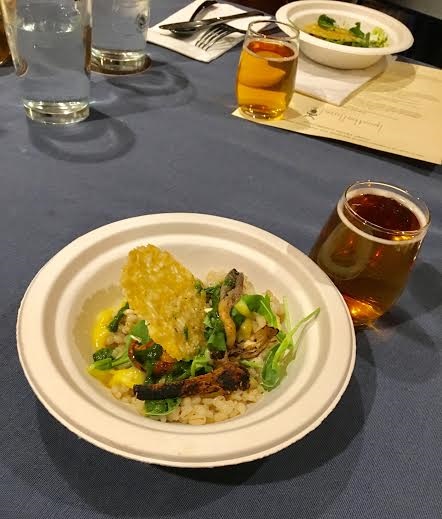 It was cheesy, crunchy and brought the dish to life. The arugula mixed with the creamy barley risotto was fresh and bright and the mushrooms were nutty, peppery and flavorful tying this dish together. The preserved Meyer lemon was very sweet and interesting super rich and I believe some sort of other green puree which was just as tasty. It was hearty and filling, and a good size portion. This dish was definitely a treat for the eyes and stomach. The beer was perfect too, it was herbal but not overpowering and brought a heightened freshness to the dish bringing out all of its flavors. 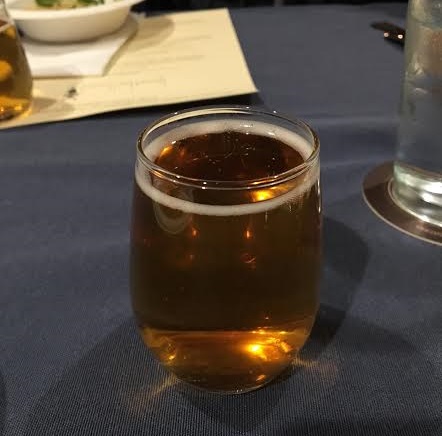 So put beer mustard and sauerkraut with pretty much any meat and I’m a happy girl. I don’t know what is it, but that’s always been one of my favorite go-to comfort foods. I don’t usually go for brisket, but this meat was delicious, tender and had an amazing crust that was on its own level. When coupled with the mustard and bitey sauerkraut, provided a burst of flavor and goodness for your mouth. 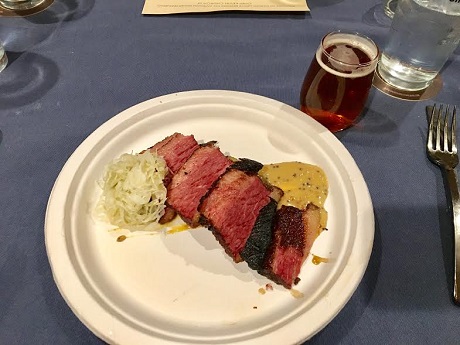 GG’s 6.8% West Coast IPA was piney, and one for the hoppy beer fans that’s for sure. Not my favorite of the beers, but it could be because I’m not on an IPA kick right now. However, i think it was the best beer for the dish. Brisket was smoked and as soon as it was delivered you could smell it emanating from the plate, making my mouth water. The crispy crust and the tender pink center was just delicious and we were given a very generous portion. The potatoes were smokey as well, but tasty and good when dipped into the mustard. The mustard was sweet, but packed so much flavor I love a good beer mustard. It fit so nicely with the brisket. The smokiness of the brisket, the slight bite of the sauerkraut, the sweetness of the mustard and an IPA to wash it all down with solidified that this was a beer dinner we were going to keep coming back to.

So dessert is my favorite part of any meal. As my boyfriend or any of my family will tell you I always have an extra space for dessert even if I’m full from my meal. This simple, but delicious dessert was the perfect ending to a delicious, flavorful and exciting beer dinner. The cannoli was filled with a homemade espresso ricotta and topped with candied orange which oddly was extremely delicious I didn’t think I was going to like that on my dessert. 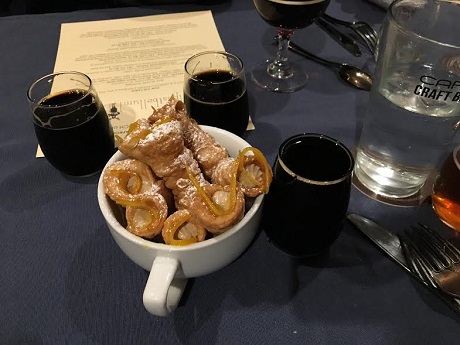 So we have a coffee cream filling inside a sugary, flaky crust paired with a chocolately rich brew, GG’s 6% Capital Stout. The stout’s intense roast coffee and dark chocolate notes come through, pairing nicely with each bite of the cannoli. The orange peel is the stout definitely comes through, it wasn’t too heavy like a lot of stouts so drinkable until the end. Its citrusy hops, which are grown and harvested onsite at Capital Ale House’s Midlothian location, balanced out the sweetness. I actually got two because they brought to the table in a big mug and one person was unable to make it to the dinner, and no one else wanted so I happily filled my dessert spot! Garden Grove’s stout would actually be a great brew for most desserts in my opinion.

So if you’ve been debating on going to a beer dinner at Garden Grove Brewing Company, my advice is to do it, you won’t regret it. Great food, awesome beers, with cool people to talk about it with, what more could you want?

The brewery will host its next beer dinner Monday, Dec. 19 with chefs Caleb Shriver & Phillip Perrow of Dutch & Co at 7pm. Reservations Required. $38 plus tax & tip. Tickets do tend to sell out fast so make sure you grab yours. Cheers!