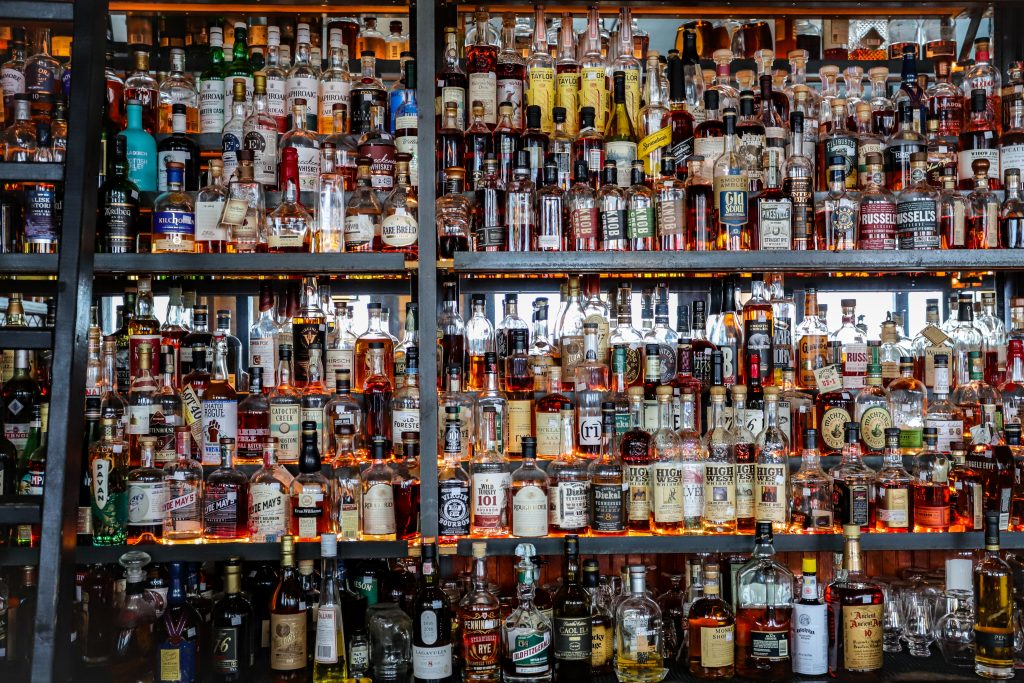 The list of nicknames and honorifics bestowed on the devil’s water is almost as diverse as the spirit itself. Whiskey, or whisky as the Scots call it, occupies a mythos in our collective history, unique among spirits. The hard-fought allegiance we give to our favorite brands and batches, for some a trial by fire, is born from long nights and hard mornings.

There is a reason why conservators excavating British explorer Ernest Shackelton’s 1908 Antarctic hut found five cases of scotch and not more anemic spirits like gin or vodka. Could we imagine a scenario where Shackleton, after months of deprivations on the South Pole says, “Yes, my dear man, let’s have a vodka soda?”

Whisky has a storied history, still hotly debated. Both the Irish and Scottish take credit for its glorious invention, yet according to the book “99 Drams of Whiskey,” neither country has any hard proof to justify their claims. The earliest origins of the spirit can be roughly dated to the 9th century, when an Arab chemist perfected a fermentation process that would much later see adoption by both Irish and Scottish distillers. To make the argument murkier, the physician who translated the Arab chemist’s texts worked for families in both countries.

Regardless of age-old controversies, RVA Mag set out to find, sample, and heavily imbibe the best whiskey’s this planet has to offer. Why? Because nothing says sophistication like sitting alone in a dark bar, brooding heavily, while drinking a fine single malt aged 15 years.

Our journey could only begin at McCormack’s’ Big Whiskey Grill. Any place that needs a library ladder to access the most prized of all liquid libations needs no signal boost. As one gazes upon the Babel’s tower of whiskeys, a religious experience unfolds; one that connects all things past and present. More so, as the owner of the Big Whiskey, William “Mac” McCormack, sets down a platter of 40 glasses, preparing our adventure into the spirit world; cue our uncontrollable tears of joy.

The RVA Mag guide to whiskey is meant to be a template for those who would journey into the galaxy of world-class whiskeys. Every palate is different, as is every budget. Therefore, this guide should also be read with a certain sense of ambition, insomuch as maybe one day you will be able to brood alone in a dark bar drinking a $110 glass of Weller Kentucky Straight, aged 14 years (or work for a magazine).

The word “whiskey” is an Anglicisation of the Irish phrase, ” uisce beatha.” Literal translation, “water of life.” By law, all Irish whiskeys have to be made on the island and made from a mash of malted cereals and distilled for at least three years in wooden casks. During the 18th and 19th centuries, there were around 1,000 registered distilleries, a true testament to their drinking culture and heritage. Today there are only around 18, but given the demand for Irish whiskey, another 13 have been licensed.

“The thing people love about Irish whiskeys is that it is very approachable,” McCormack said, after pouring us an 18-year-old Jameson. “They are much milder than other whiskeys…this particular one, when you smell the nose, you can smell huge toffee and caramel.” Made in former bourbon casks, Jameson 18 takes on a vanilla and spice finish that enhances the flavor.

“This is not your grandfather’s Jameson,” McCormack said, and at $35 a glass, he is not wrong.

Next up was Bushmills 21, aged in three distinct casks: sherry, Madeira, and bourbon, distilling for seven years in each barrel. In general, McCormack said he preferred whiskey distilled in sherry casks. Bushmills leases their casks to companies making sherry, having them returned so they can eventually distill their own whiskey in them.

Having a smooth finish, more so than the Jameson 18, the Bushmills 21 takes its flavor profile from the secondary casking process in the sherry and Madeira casks. “There is a lot of sugars that are left from the grapes because they are fortified wines. Those work their way into the cell wall of the [cask] wood and as the whiskey sits in there it breaks down the wood and releases the sugars into the whiskey,” McCormack said.

Whiskey has been distilled in Wales since the dark-ages, but has only re-emerged as a player on the scene since the mid-’90s with their flagship bottle, Penderyn. Like a lot of Scottish whiskys, Penderyn is a single-malt that is produced in the Cynon Valley in the South of Wales. “This is something I would consider an everyday whiskey,” McCormack said. “It has such a mild, nice, light flavor…like dried stone fruit notes and raisins, is what I taste on the back-end.”

He also noted that it tasted like “regret” and “remorse,” a joke for those who have experienced enough whiskey. Welsh offerings are often overlooked for the more high-profile bottles that come from Scotland, Ireland, and America, which makes it a niche offering if you are trying to impress someone who actually knows about whiskey.

Where does one begin when speaking about Scottish whisky or simply scotch? The first mention of the delectable spirit was in 1495, in the Exchequer Rolls of Scotland, a government accounting record. Originally made from malted barley, the recipe was updated in the 18th century to include rye and wheat. All scotch can be distilled down–a little whisky humor there–into five categories: single malt, single grain, blended malt, blended grain, and blended scotch.

Macallan 18 is a go-to scotch for anyone that needs a high-end go-to scotch. McCormack described it as “a universal standard for good whiskey.” The flavor profile of the Macallan 18 is rich with dark fruit notes of cherries, plums, and currants. “Rich is a pretty common way to describe [whiskys] that have a vibrant, thick mouthfeel,” McCormack said. The distinctive flavor is by design; Macallan uses a secondary casking process that blends whisky aged between 18 and 24 years to develop this profile.

The next scotch on our journey was the GlenDronach, also aged 18 years. “I wanted to show you this one…just because people think it is the best, doesn’t mean it is,” McCormack said, referring to the more well-known favorites, and adding, “This whisky is phenomenal.” Distilled in Oloroso sherry casks, GlenDronach has a robust taste that is a wee bit petey on the nose, but once imbibed finishes with a strong rich character of fruit and cinnamon.

Jack Daniels is an American staple, and one of the most recognized brands in the world. While many know it as the drink that launched a thousand college hangovers, Mr. Daniels is more than just a mid-level mixer, and McCormack brought out their 150th-anniversary bottle to prove it. Jack Daniels cannot be considered a bourbon because of a charcoal filtering process, which counts as a flavor additive, which lets the makers experiment and try different techniques. “What is really cool about this whiskey is that they make the barrels from maple trees,” McCormack said. “This is one of the most unique and delicious whiskeys I’ve ever had.” This glass had a sweet dessert flavor with rare butterscotch and blueberry notes, absent in other American whiskeys.

Virginia is not really known for making particularly good whiskeys, which is what makes the Abraham Bowman’s Pioneer Spirit so interestingly delicious. Made in Fredericksburg, this small-batch bourbon has a secondary aging process in Hardywood’s Gingerbread Stout casks. The process gives it a malty, gingerbread stout finish.

The heavyweight champion of all bourbons this evening was the Weller Kentucky Straight. At 14 years old this bottle is barrel-proof, meaning not watered down to a specific percentage, and fetches an aftermarket price of around $625, as it’s become a collector’s item. “This is a perfect bourbon,” McCormack said, adding, he wants his bourbon to be high proof and “full flavored, not diluted.” At 120 proof it more than delivers, and for those who know their bourbons, McCormack claims that this bottle can rival the famed Pappy Van Winkle, also one of the most sought-after bottles in the whisky world. 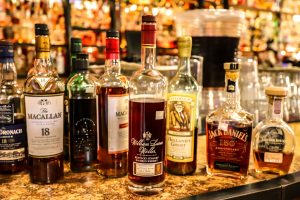 Japan is not a place one usually thinks of when it comes to whiskey, so for those who want to be known for their taste in niche whiskeys, this bottle is for you. The Yamazaki 18 is one of the most sought-after bottles of single malt whiskey in the world, although it’s not technically a scotch, because it isn’t made in Scotland. In the early 1900s, the original distiller traveled to Scotland from Japan, where he lived for seven years perfecting his craft. Fun fact: The distillery, Suntory, is the same one featured in the Bill Murray classic, “Lost in Translation.” This scotch has a very thick and pleasant finish with notes of citrus and sherry, due to the casking, which makes the flavor profile very subtle.

“This is super traditional scotch,” McCormack said, “even though it is made in Japan.” It is considered a single-malt since it is only made in one distillery with their barrels being manufactured in Japan. “The Japanese look at distillation as an art.”

There is no substitute for a fine whiskey tasting, especially one that would have cost you $3,200, marking either the best or worst night of your life. It is true that the world of whiskey is an esoteric one, filled with deep traditions, along with cultures and subcultures that can seem intimidating. But once mastered, a life-long relationship can begin with one of the most timeless spirits the world has to offer.

A visit to Virginia's oldest whisky makers, Fredericksburg's A. Smith Bowman Distillery, offers an opportunity to learn all about the... READ MORE

Hungry Harvest are the Food Heroes We Need

From the many food insecurity issues created by the pandemic to the ongoing threat of food scarcity due to climate change, access to fresh... READ MORE

From the rules of the road to the ins and outs of CBD, THC, and more, RVA Mag walks you through the full legal implications of... READ MORE

A visit to Virginia's oldest whisky makers, Fredericksburg's A. Smith Bowman Distillery, offers an opportunity to learn all about the... READ MORE

Hungry Harvest are the Food Heroes We Need

From the many food insecurity issues created by the pandemic to the ongoing threat of food scarcity due to climate change, access to fresh... READ MORE

From the rules of the road to the ins and outs of CBD, THC, and more, RVA Mag walks you through the full legal implications of... READ MORE