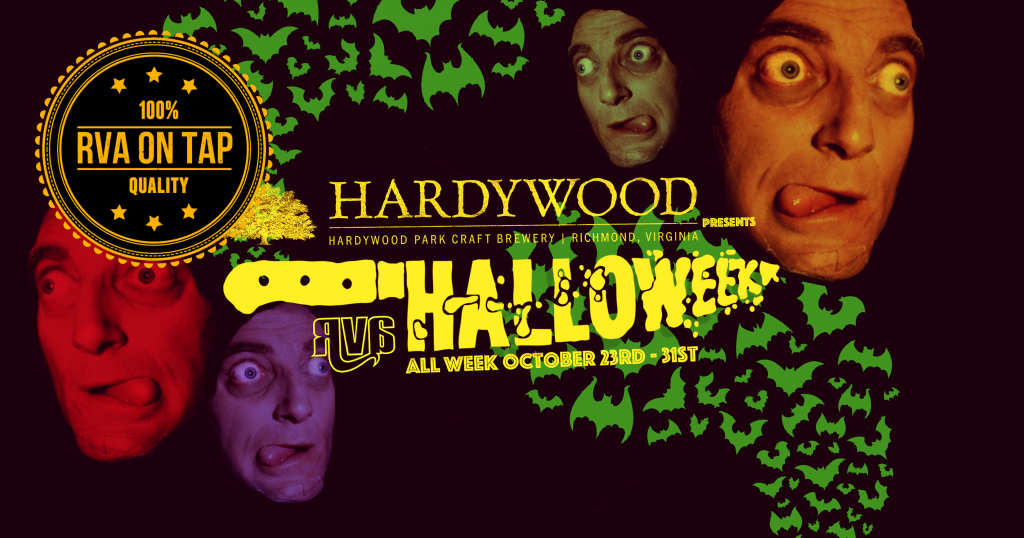 Last week, we saw some great beer releases and checked out the Scott’s Addition Booz Crawl, which is coming up this Saturday in Richmond’s booziest neighborhood. We also hit the books again as one of the country’s best beer cities (but we already knew that). 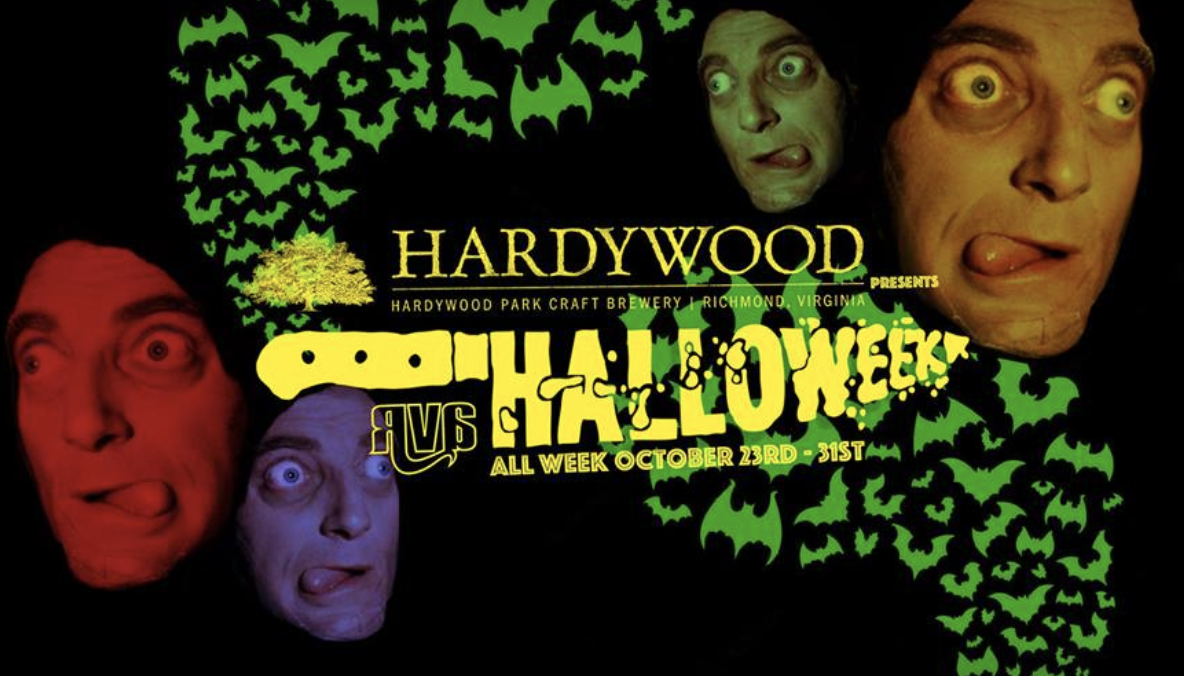 Haaaaallelujah, today is the first official day of this year’s Halloweek! That’s music to our ears at the magazine, because it’s our favorite week of the year. RVA Magazine partners up with Hardywood Park Craft Brewery once a year to bring Richmonders the city’s best in Halloween events, jam-packed with beer, bands, zombies, parties and more on every day leading up to the 31st.

Halloweek starts tonight(!!) at Hardywood’s Kick-Off party, with a Halloween FX Makeup workshop for all the overachievers out there, silent movie screenings of the best classics, and Thriller-mixed punk/horror garage jams — but the big fun comes on Saturday, when the brewery drops Trickery in an all-day party for the occasion.

Hardywood first introduced Trickery a few years back as the Halloween season’s go-to brew, and the “deliciously dark” stout has received great feedback every year since: it was even named one of HopCulture’s best beers in the country to drink this fall.

Trickery is all your Halloween dreams wrapped up in one. The 13.5% ABV imperial milk stout is aged in apple-brandy barrels for 8 months, and full of flavors like warm caramel, blackstrap molasses, and chocolate-covered cherries. It’ll be on tap at all three of Hardywood’s locations, and open to take home in to-go bottles if you can’t get enough.

In more new booze news, Ardent is releasing their Fall American Sour Blend tomorrow at their Scott’s Addition spot, a copper-colored and medium-bodied blend of sour blonde and Brett IPA. This is one of those patience-is-a-virtue beers — the kind that gets better as it ages in your kitchen, while it gets harder and harder not to open it (and the kind that if you’re like me, ends up opened in a day). It’s dry, balanced, and the “funky characteristic” from Brettanomyces pairs with the oak barrels it’s aged in to bring this beer a light acidity to its taste.

After the weekend, Halloweek continues when The Answer Brewpub teams up with the magazine and Hardywood Monday night to put on “Hallobeer,” an annual party at The Answer with music from The Mekong Express, and tracks from Earth, Wind, and Fire. There’ll be special brews on deck as well as costume contests for attendees, so remember what you learned at Hardywood’s FX Workshop and go win some prizes.

Final Gravity drops a new IPA this Friday with so many Galaxy hops “you’ll feel like you’ve known it from another life.” Down the black hole of Astral Plane, you’ll find citrus, passionfruit, and peach bringing this ethereal IPA together. Give it a try at its release, or swing by the brewery on Sunday for Oktoberfest in Lakeside. They’ll also be dropping their seasonal Kingdoms Rise and serving up some serious sausages from Cafe Rustika, marinated in the Oktoberfest beer. Bless.

Hope you like dogs, because there are TWO beer and pup events coming up this weekend! Center of the Universe Brewing, one of my faves around town, is hosting Growl-O-Ween this Saturday. Grab your pooch, your costume, and your good-time shoes, they say, for a doggone good time (nice). They’ll have musical chairs, photobooths, bobbing for tennis balls (my heart!), and all the proceeds go back to the Friends of Hanover Dog Parks and the Hanover Humane Society. My beagle, Bagel (pre-Richmond famous Bagel), would be in heaven.

Strangeways is also celebrating the best animal in the world this year, with Barktoberfest this Saturday benefitting shelter and adoption groups like Richmond Animal Care and Control (RACC), the Henrico Humane Society and more. The fur-filled fun day is also hosting a doggy costume contest, so if you’re not a dog person already, I suggest (strongly suggest) you make your way there and change your mind (or else). All extra donations go to Adopt RVA, which Strangeways said was “a natural fit,” because “Dogs and cats are like beer. It’s hard to choose just ONE,” and they certainly know their stuff — Strangeways has 36 beers on tap every day.

Over at Legend Brewing Company, the Manchester Harvest Festival is right around the corner. The festival’s set for this Saturday, and has food trucks, costume contests (for both kids and adults) and good ol’ Americana music to really get that fall in Virginia feel. Legend has long-been our favorite place across the bridge, and the Harvest Festival is one of the best days of the year there. Make sure to come out and grab a fresh copy of the newest RVA Magazine in print, and wear your costume to get picked by our very own CEO, John Reinhold, who’s judging the contest at the event.

HAPPY BIRTHDAY, ISLEY! The Scott’s Addition brewery turns 5 this Saturday, and they’ll have five birthday infusions on tap to celebrate: a Mango IPA, Orangegasmic porter, coffee-infused Stunt Dubbel, bourbon-aged Fastidious Father, and Boozy Mother. Boozy Mother sounds a little reminiscent of my future. They’ll also have the Bodillaz and Manchu food trucks out for the event, and wine pours from James River Cellars. Head down this weekend and buy yourself a birthday beer on their behalf.

If you’re traveling soon, check out the Imbibe Beer & Arts Festival happening over two weekends in Fredericksburg and Virginia beach. Tons of breweries from around the state are coming out, including Richmond’s Ardent, Legend, Lickinghole Creek, and Strangeways. Some other Commonwealth brewers like Alewerks, Devil’s Backbone, and Starr Hill will make the trip from around the state, for an all-in-one Virginia faves fest with some of the best brews in the country.

For all the coffee lovers out there, Garden Grove just teamed up with Bright Spot Coffee to make The Empress. It’s part-cold brew, part-beer, and the coffee-infused Robust Porter sounds like the perfect way to start the day fresh all over again in the evening. We’ve got some more coffee brews coming up soon from around town — there’s nothing better in your beer for this time of year. Can’t wait to give this one a try!