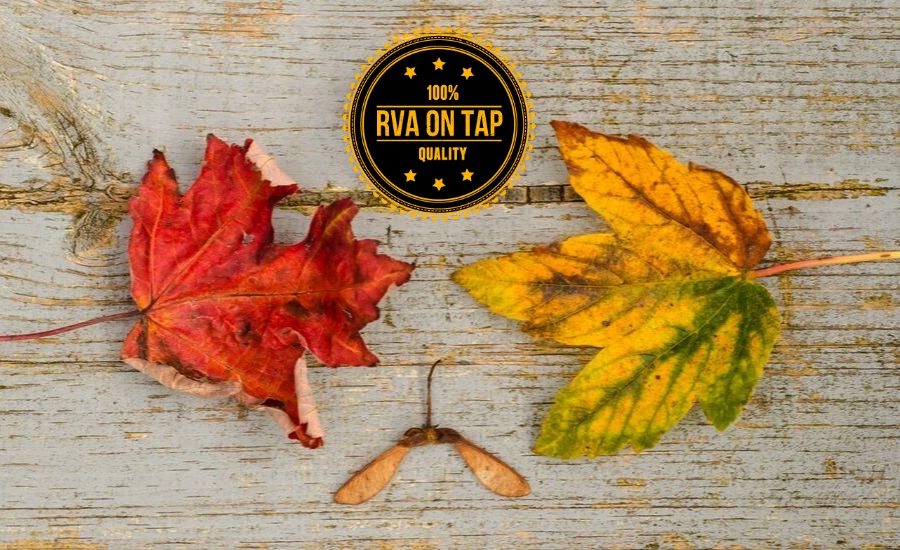 This week, we’ve got more fall events and some amazing new beer releases from our favorite locals, plus a bittersweet goodbye to one of my favorite Virginia spots after their closing in Botetourt County.

If you’ve been enjoying the array of Oktoberfests around town this month, trust us that we’ve got one you won’t want to miss. Hardywood’s Oktoberfest goes down all day this Saturday at their West Creek spot, and they’re telling you to pull out your lederhosen, because it’s time to party!

The fest goes on from 1-10pm, with games, contests, live music with Elby Brass and the Harpoondodgers, and lots more. Some of our favorite eats are also going to be around, like Grandpa Eddie’s Alabama Ribs & BBQ (my personal favorite, as you all have heard from me a hundred times by now — try them!!), The Return of the Mac, Southern Spud, Dockery Farms, Candy Valley Cake Company, La Bete, Wigglestick Barbecue, and the Prost Food Truck. The PROST! Bar opens to kick off the day at 1, then Oktoberfest goes on with some extra-special barrel tappings and a parade of booze.

And the most important part: the beer! They’ll have “a whole slew” of German brews ready to go at Hardywood, like Smoked Marzen, Munich Dunkel, Doppelbock, Helles, and Hefeweizen. Don’t miss tons of awesome Oktoberfest-themed games with Shalom Farms as well, and traditional German dancing from the Alpine Dancers. See ya there!

We’ve got some awesome news coming this weekend from Center of the Universe, too. We all know the feeling of visiting our favorite breweries on a slow night and wishing there was more food around. Aside from a small few, most spots in Richmond don’t have food vendors stationed at their spots all the time.

That’s about to change again with our friends at COTU, who are celebrating the grand opening of the permanent Freekin’ Rican food vendor out at their Ashland brewery to occupy the “beer window” in the biergarten. The whole day will be full of activities and Puerto Rican-inspired food to commemorate the opening, with burgers, bratwurst, tacos, quesadillas, nachos, sandwiches, pork and chicken entrees, and more.

For the occasion, COTU is bringing back their limited return of Monkey’s Uncle Lemongrass Tripel and Summer Moon Raspberry, an Imperial Wheat Ale, for one day only! They’ll also be starting weekly specials the following week, like $3 tacos for Taco Tuesdays, Tapas Thursdays, and Island Sundays to bring out traditional Caribbean Island dishes — so if you miss the very-special returns of these two stellar brews, you’ll still have a reason to celebrate the new addition with them every week.

Three new brews hit the taps at Strangeways over the weekend, and we can’t wait to get our hands on these.

Fine Malt Lyrics Malt Liquor — which one might assume is a House Of Pain reference — kicks off the releases, and this high 9.1% ABV brew hits in at 30 IBU and has an “absurd strength,” according to the brewers. With a big malt-forward taste, it came together with both two-row and six-row barley, plus flaked corn to round out all its flavors.

Brass Monkey comes second, and this 7.3% ABV with 30 IBU recipe is a lot lighter — and might just be perfect for those friends of yours who tend to pick the brunch drinks over beer. This mimosa-style beer is Strangeways’ Fine Malt Lyrics mixed with orange juice to create the perfect beermosa blend (and it’s Beastie-approved).

Wizard Fight! is the lowest ABV of the releases, and at 7.0% and with 70 IBU has a “chewy malt character” that’s accented by its juicy fruit flavors and aromas. The Pilsner and white wheat malts come together with the Columbus and Azacca hops to combine the fruity with the crisp in the New England IPA.

More great brews are on the way this week with Fine Creek Brewing Company’s Chestnut Honey Brown Ale release on Saturday. The beer is coming as a collaboration with Elysium Honey, who are hosting a pop-up at the brewery from 3-6pm this Saturday as Fine Creek taps their brand-new brown ale.

Chestnut Honey has a rich maltiness to its flavor, with fruit characters highlighted from the honey additions in its brewing process. With nutty and bready malt tones, the Elysium Honey has a fruity and herbal aroma that goes perfectly with the tastes of pumpernickel bread, coffee, and baker’s cocoa in this beer.

You can grab a glass of your own this weekend, and support Elysium Honey’s land and hive management work, alongside Damian Allen playing in the taproom through the evening.

Over at Final Gravity Brewing Co., Pulsar New England IPA made its way to the taps in all its 100% Falconer’s Flight hop glory recently.

The brand-new IPA came out as part of a triple-release with two siblings, starting with Retrograde Session IPA. Retrograde was brewed with all Mosaic hops in its return, and they also brought back The Doppler Effect in their latest batch. This new recipe added extra Mosaic hops to the original favorite, and double dry-hopped the hops in the fermenter *and* the kegs to bring out “that extra POW of citrus,” according to the brewery. Head over to get a taste of whichever suits your palate — or all three — and stick around for Dart Night if you make it out tonight!

Our buds at Triple Crossing Beer put something fresh on deck (and best enjoyed on the deck) this week as well. Czech Dark came back to the taps with Triple Crossing’s “hopes for the eventual end of summer,” and boy, are they preaching to the choir. With all these delicious seasonal beers coming out, we are anxiously awaiting a chilly day to drink them with.

Czech Dark pours with a black mirror deep-dark-ness that brings out subtle red tones underneath its fluffy head. You’ll catch some small notes of coffee in this easy-drinking 5.2% ABV lager, and the late-fall flavors are dry, toasty, and have a roast-forward finish.

It’s time for Lager World at The Veil Brewing Co.! This Saturday, head over to your favorite Scott’s Addition spot for The Veil’s second Oktoberfest-style jammer, with 12 special brews for the occasion, plus two extra releases.

If you’re in the mood for a lager, you’ll have more than enough to pick from: Hide, Child Support, Jackson Flavor, Rain, Coalesce, Numb, Love and Trust, Deathless, Thorn, Braühaüsenweisse (try saying that one three times fast), and Dwell, from both its first and second batches.

Special releases coming are Deathless in 4-packs and Batch 2 of Dwell in bottles that day, plus sausages from Cardinal State Butchers and the delicious Sugar & Twine pretzels. Something even more special: for $10 (16oz) or $14 (32oz), you can grab your own stein and fill ‘em back up with any beers available with no limit.

This Friday, a brand-new can release is going down at Väsen Brewing Company, and it’s right up my alley. This juicy Double IPA is called Mandarin Galaxy, and it’s “loaded” with Citra Cyro, Mosaic, Mandarina Bavaria, and Australian Galaxy hops.

You can get your own taste of it this weekend along with the perfect dinner to complement this brew: Intergalactic Tacos! Get spacey, Richmond. Both of these rule.

Got something on your mind lately? Here’s your chance to get it out with a Brainstorm. This collab brew comes fresh from our friends at Ardent Craft Ales, in collaboration with Narrow Gauge Brewing Company out of St. Louis.

Another delicious juicy Double IPA, Brainstorm is “bursting with flavors of orange and pineapple” from its double dry-hop process with Amarillo and Galaxy hops, and it’s the perfect way to close out these last super-hot days of summer and make them feel (and taste) a little better. With this soft, aromatic, smooth, and flavorful recipe, the 9.0% ABV beer hits in at 10 IBU and is available in both draft and crowler fills.

This Friday, Three Notch’d RVA Collab House is working with Dotted Line Collaborations to put out a new beer called Dot Your IPAs. This New England IPA will benefit the Shepherd’s Way Relief Center to donate a portion of their sales to the charity, which helps local impoverished citizens get back on their feet. The brews are $3, and for each one sold, $1 goes back to the organization — so head on out and drink for a cause!

In more collab news, Three Notch’d is also searching for more folks from organizations, companies, charitable causes and more to partner up and make collab beers to do good. If you or your place of work has any opportunities for collaboration, hit up Three Notch’d here and see what you can get rolling.

This one might be my favorite of the whole week. Isley Brewing Company just dropped Choosy Mother in-house and to-go — and this Peanut Butter Porter is all of the best parts of Reese’s and peanut butter pies wrapped up in one delicious brew.

They also released Sir Falstaff this week, a West Coast Double IPA with a lovely golden amber color and 9.1% ABV.

It’s the season of Brown Ales, and I couldn’t be more stoked for it. An especially-awesome variation just came out at Kindred Spirit Brewing: Coffee Brown Ale, which comes in at 6.0% ABV and brings out all the best flavors in one.

Coffee Brown Ale brings together the creamy with the sweet in this coffee-toffee mixup, with a hint of chocolate to finish it off. They also dropped Project Pale Ale, a 4.6% ABV ale that was hopped with Centennial and “a little CTZ” that brings out a perfectly piney flavor, resiny and with hints of citrus for a crisp, refreshing drink.

Before we go today, I just want to say a quick (and very sad) goodbye to Ballast Point Brewing in Botetourt County. This brewery was pretty special to me, and while it’s not close to us in Richmond, I held it very close to my little mountain heart from good times spent drinking their amazing beers on chilly days visiting home over last winter. It was one of the prettiest breweries I’ve been in to date, and something about a cloudy day, all bundled up in flannels overlooking the mountains at Ballast Point, just felt right. They aren’t closed nationwide, but after a big uprising from the locals trying to get them to stay, Ballast Point ultimately said no and closed the location to pursue bigger things and more distribution. They poured their last beer here last week, and they will be sorely missed by my hometown. Cheers forever, Ballast Point, and thanks for the memories!