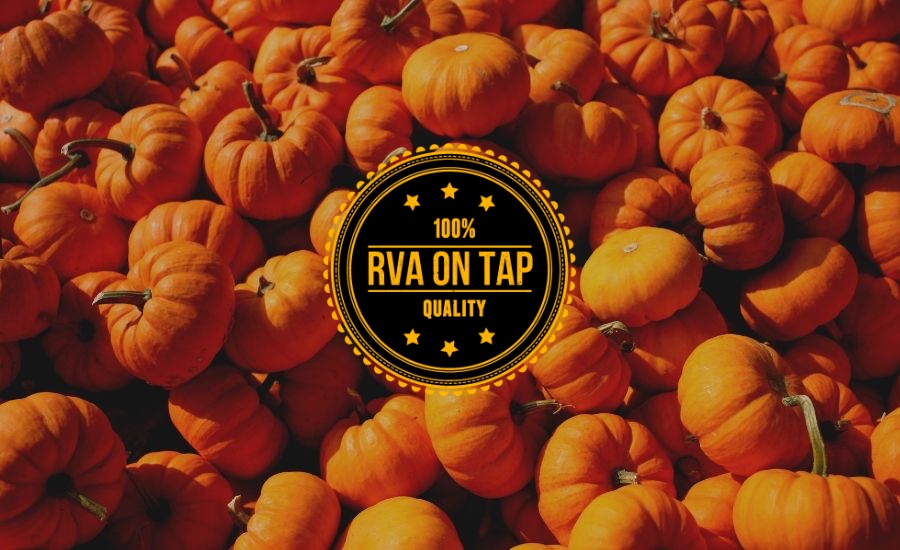 This week, we’ve got some great new releases from the brewers across Richmond, and HUGE big exciting news that I’ve been waiting a long time for. If you read this somewhat regularly, you’ll probably know (and be tired of) my summer woes and the desperate wait for fall… so you’ll know why I’m so pumped this week for:

FINALLY, fall is almost here, and the best tastes of the year are coming back. I’ve been waiting very impatiently since the end of last fall for another one to begin, and this beautiful short season better stick around longer this time.

If you’ve been eagerly-awaiting the return of pumpkin to your life, you’re not alone. Catch me in a flannel and dirty old boots eating an entire pie to myself and living my best life, I don’t care. I’m so happy this hell of a summer is almost over.

Our buds at Hardywood have the perfect beer to commemorate the happiest season of all: Farmhouse Pumpkin. It’s making its way back to the taps this Saturday, much to my enjoyment. This classic Richmond favorite is brewed with saison yeast, over 1,000 pounds of Virginia-grown sugar pumpkins from Grandma’s Pumpkins RVA, three pounds of whole nutmeg, clove and allspice, and over four pounds of fresh ginger root from the local Casselmonte Farm out in Powhatan. This farmhouse brew is soft on the tongue, with a great amount of rustic fall flavors to ring in the cold nights and changing leaves.

God, I’m so happy. I’ve been waiting to write this blurb for months. Go get a pumpkin beer! Also, in more great news, Hardywood’s dropping Union Break in cans on Friday, a delicious Belgian-style White Ale that took 10-hour days from the packaging team to bring to life — with plenty of stoic dedication, sorcerous endurance, and a steady diet of energy drinks, according to Hardywood. And, obviously, a big dose of 80’s heavy metal. This beauty is coming out for #FreshCanFriday right before the big pumpkin release, so if you ever needed a reason to spend an entire weekend at Hardywood, you’ve definitely got one now.

Out at Ardent Craft Ales, the Leigh Street DIPA can release is going down tomorrow night. This beer made its debut a while back, but it’s returning to us in cans with its big, juicy flavor that was double dry-hopped. In its brewing, Ardent used only Mosaic hops, so it’s packed with the tropical, fruity flavors and aromas its hops are known for.

This is actually my current favorite beer-type, because it’s up there in alcohol at 8% ABV, but still soft to the taste. You’ll catch a low bitterness with this one, but still the classic bold flavors you expect from a brew that’s been through a double dry-hopped process. This is one I definitely don’t want to miss a taste of, so if you’ve got similar taste, swing by for a set while you can.

Falcon Day! Triple Crossing Beer’s got something awesome brewing, with a giant four-part release coming up this Friday. You’ll have to bounce back and forth between their downtown and Fulton locations if you want to try all four, but my bets are on that you won’t need so many. Triple Crossing’s Fulton spot is one of my favorite in town, and not too far from Stone Brewing Richmond if you’re looking to make a brewery-hopping evening out of it.

Beloved favorites are coming out in cans and crowlers to bring the full series out at once, with Falcon Smash IPA’s Retro Can Release at both locations, Space Falcon IPA and Falcon Heavy DIPA at just Fulton on Friday, and finally, Baby Falcon Session IPA in crowlers only at both locations.

Also on Friday, make a pit stop in the East End at Stone Brewing Richmond for the release of their Mango Maya Milkshake IPA in collaboration with Rusty Burrell.

To bring this beer to life, Stone partnered up with the American Homebrewers Association (AHA) to host a people’s choice-style homebrew competition in Richmond. The winner, Robert “Rusty” Burrell, was chosen to brew in collaboration with Stone — and perhaps a reason for him to feel extra-lucky, his beer will also be entered into the annual Great American Beer Festival Pro-Am coming up later this year.

Rusty himself will be hanging out at the brewery on Friday evening, so stop by our favorite East End spot for a taste of your own and give him a cheers for his success.

A lot has been brewing at Lickinghole Creek Craft Brewery lately, in these brand-new collaboration beers with Three Notch’d RVA Collab House.

Starting off, The Source Blueberry Milkshake IPA looks like it’s absolutely to-die for. They’ve also got Juicy #14, which if you remember from last week, sounded amazing. The two brewers together also released The Source IPA, brewed with lactose for the perfect texture.

Lickinghole and Three Notch’d are two of my favorites in this huge sea of breweries that we call Richmond, because there’s nothing quite like an evening on the farm with Lickinghole (especially when the sunflowers are out for picking), and because I’ve spent many an evening with Three Notch’d down at their spot in my hometown, Roanoke. They were a welcome addition to Roanoke’s downtown, which is slowly growing with a number of breweries of its own, and they’re doing some awesome things up here in Richmond at their RVA Collab House.

Over the weekend at Väsen Brewing Company, Azanian Passion came out in all its hazy, New England-style Double IPA glory. Another Double IPA right up my alley (and hopefully up yours, too), Azanian Passion has some intense hop aromas “leaping” from each glass, which are brought to you by its perfectly-balanced combination of Azacca, Citra, Mosaic, Simcoe, and Southern Passion hops. It’s also packed with tropical flavors like pineapple and passionfruit, which are complemented by its different piney and floral notes. According to the brewers, it’s moderately bitter and intensely hoppy, so you’ll find yourself somewhere in the middle of the traditional IPA flavors.

Out at Fine Creek Brewing, a Friday Beer Feature dropped over the weekend that sounds like earthy dessert in a glass. Hudson Henry Granola Stout hits in at 7% ABV, and this traditional oatmeal-stout inspired brew was made in collaboration with the Hudson Henry Baking Co.

Rather than the oats of a traditional recipe, Fine Creek swapped for original granola to bring out some *delicious* maple, pecan, and coconut flavors. You’ll taste mild roasted grain flavors in this one, and even more with maple syrup, roasted malt, cafe con leche, and subtle toasted coconut… plus highlights of chocolate, vanilla, and dark roast coffee. Does it get any better than that? I’ll be damned, I don’t think it does.

Tonight at Canon & Draw Brewing Company, head over for a tasty (and hilarious) release. Canon & Draw has been running a series lately that they call the “Tim & Matt Awesome Beer Great Job!” IPA Series, which has featured great flavors like tropical fruits and floral aromas, with orange and grapefruit juice, plus hints of pine.

Next up in the series is Season 2, which you can taste anytime after 2pm today at the West Main Street brewery — so if you’re reading this in the morning and already craving a new beer, they’ve got you covered for day drinking after lunch.

A new American Barleywine is on its way to Steam Bell Beer Works this Friday, and if you’ve never tasted a Barleywine, get prepared. These thick, dark beer-wine mashups are heavy on the throat, but lord, they taste good.

If you’re not big on stouts and porters, this one might not be for you — but if you got as excited as I did for Fine Creek’s granola stout, this might just be up your alley. Hitting in at 10.6% ABV, you’ll want to go easy on the drinking, and you can grab it on draft or take it to-go if you think you’re better off not having to call that Uber afterward. Either way, a good Barleywine can be really hard to find in the city, so Steam Bell’s latest release is one you’ll want to get a taste of one way or another while you can!