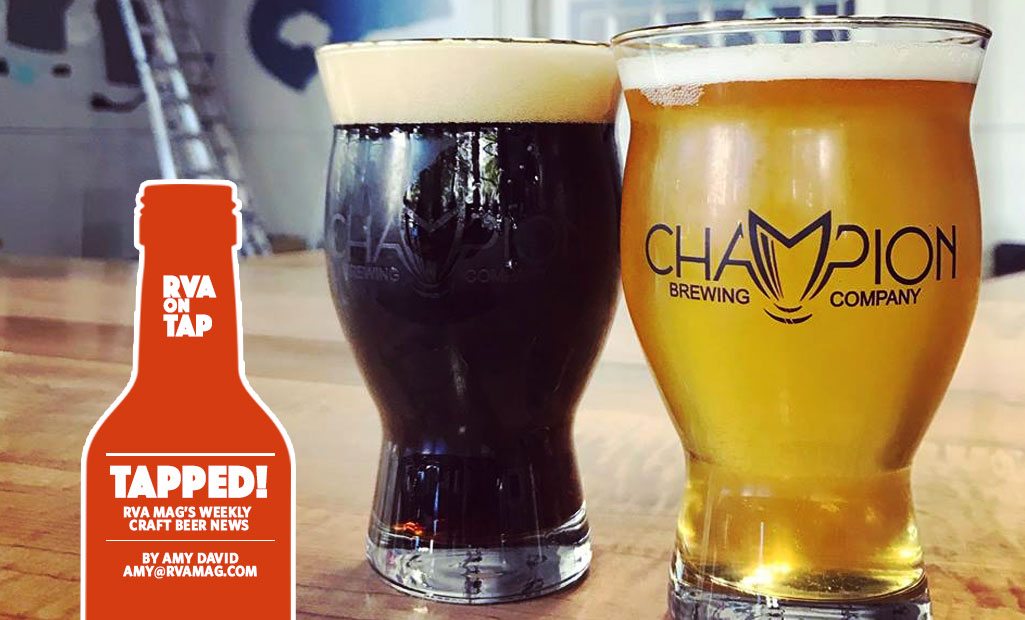 Today, Champion Brewing Company will release its collaboration brew with Gallery5, Schwarbier5, which is German for “black beer”. The brew is a medium-bodied dark lager and for this release, the party will include a pop-up kitchen from the Nile, OlNuBi will be spinnin’ the tunes, and more. Ten percent of bar sales will also go to benefit Gallery5.

This Friday, Fine Creek will be releasing 3 new beers: Chocolate Clementine Stout, a tart stout with strong citrus and chocolate notes, Sour Pale Ale, made with Lemondrop, Azacca, and Wakatu hop, and  New Zealand Saison, with Wakatu and Motueka hops. This has a nice lime citrus, lemongrass, light and clean profile. The Powhatan brewery is also doing Crowl-a-Thon on Saturday; special deals on 3 and 6 packs of crowlers.

On Saturday, just before the holidays, Isley will host a brunch and release its Raspberry Gose. Monte Cristos , Omelettes, and other breakfast dishes from Jus’ Cukin’ paired with their raspberry gose and Beermosas.

Vasen Brewing recently released two new brews for you to check out. The Scott’s Addition brewery has added the Tripel and a Lemon Tart Saison to its lineup. The Tripel is an Abbey-style brew with flavors of melon, dried fruit, and brown sugar. The Lemon Tart  Saison was made by hand-zesting over 600 lemons to produce a dry, citrusy saison.

Tomorrow, Three Notch’d Brewing RVA Collab House House returns with their weekly collaboration. This go around, it’s a Sedona Solstice
Hazelnut Oatmeal Stout with veteran restaurateur Dennis Barbaro. The keg will be tapped at 4pm and we’ve got Pint Specials on the new release from 4-7pm. The brewery is donating a portion of the proceeds to CancerLINC.

This Saturday, Castleburg Brewery will release The Executioner a collaboration, with Josh Starliper. The brew is an Imperial Porter made with cherries and Tahitian vanilla beans.

Its Third Thursday at The Veil Brewing and from 5p-8p 15% of sales will go to OAR of Richmond, Inc. , a provider in the Richmond area since 1971, serving individuals recently incarcerated. Raffle for 4-packs of Veil beer. All proceeds go to OAR. Food: 4p-9p InHause Dumpling Pop Up. DJ: Dj El Capone 7p-9p. The brewery will release Klean Belgiez 8.5% Belgian Quad.

On Thursday, Ardent Craft Ales will release  Black Saison, a wintery twist on our their classic Saison. Black Saison is a draft-only special, no bottles, but we’ll be filling crowlers/growlers to go. Continental Divide Richmond will be serving up food.

This weekend, at Lickinghole Creek, the Goochland farm brewery will have all your last minute gifts Christmas Case deals (12 pack of 750 mL) and 3 pack deals. + new shirts and hoodies!

Final Gravity Brewing Co. will release its Elliptical Path DIPA this Friday, which is brewed with Galaxy and Citra hops.

Legend Brewing has some good beers this holiday season for you to check out this weekend. The brewery has the Legend Lager, Golden IPA, and Brown Ale.

Amy David was the Web Editor for RVAMag.com from May 2015 until September 2018. She covered craft beer, food, music, art and more. She's been a journalist since 2010 and attended Radford University. She enjoys dogs, beer, tacos, and Bob's Burgers references.
Topics: craft beer, RVA breweries, RVA craft beer, RVA On Tap