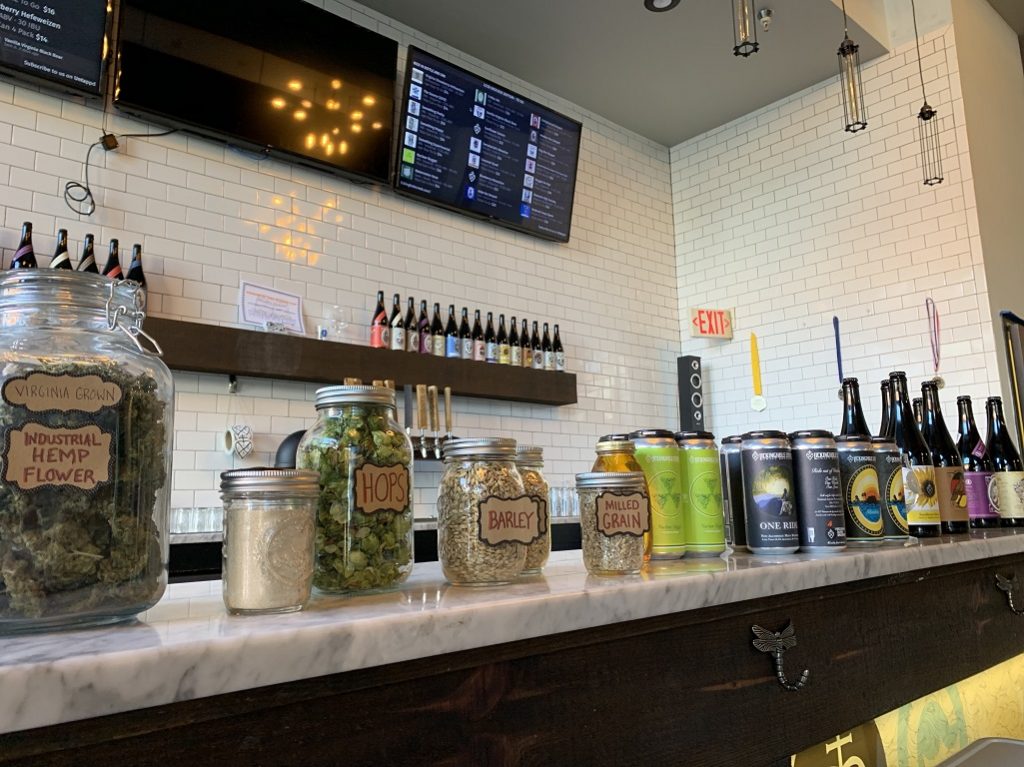 The Goochland-based craft brewery is ready to brighten up Shockoe Bottom with the grand reopening of their Richmond location next month.

Renovations have been steadily underway for Goochland-based brewery Lickinghole Creek’s Richmond location, which is nestled among the myriad of restaurants, bars and cafes in Shockoe Bottom. By next month, those renovations will be complete.

Among the controlled chaos of renovation inside the brewery, an outline for a mural sits on an otherwise bare white wall. When it is finished, Lickinghole Creek CEO and co-founder Lisa Pumphrey hopes everyone who visits will notice.

The mural will be an outward spiral highlighting not only the history of her business, but also its impact on the greater community and environment. Through that symbolism, Pumphrey wants patrons to use the mural as a starting point for conversation on how they too can contribute good to the world.

“Everything cycles together,” Pumphrey said. “And in our case, we like to say that it’s not full circle but a spiral outward.”

For Pumphrey, that spiral begins with the origins of Lickinghole Creek at its main farm in Goochland County, Virginia. Before the company even began to brew, environmentalism was on the forefront of its mind. The farm was originally a soil reclamation project. First, Pumphrey grew crops such as sunflowers and soybeans to make the soil fertile again.

Then, in 2010, Lickinghole Creek began growing hops. From there, Lickinghole Creek grew into a successful brewery selling craft beers, and now, with the legalization of hemp in Virginia, CBD products. With this economic success, Lickinghole Creek has been able to use portions of its proceeds towards philanthropic projects, such as bringing clean water to Jamaica and supporting nonprofits like Pipe Hitters Union Motorcycle Club.

This is part of what Pumphrey calls her “spiral economics” model, wherein she hopes to use what she has found to be economically successful to teach others how they too can both economically and environmentally benefit.

In the case of the farm, Pumphrey helped push for legislation that would allow small farmers such as herself the ability to produce and sell alcohol on their property — a more profitable venture for small farms than other produce options. She also advocates for the growing of hemp, which she views as not only a better plant for soil fertility, but also one that will help push farmers away from using harmful pesticides, since those pesticides will harm the purity of CBD products that they can profit from.

The latest extent of the spiral comes to Lickinghole Creek’s Shockoe Bottom location, which will finalize its renovations in a grand reopening ceremony on November 15. While it has been open since August 2017, it hasn’t reached the fullest potential that owner Lisa Pumphrey believes it can achieve.

Pumphrey has plans for there to be a stage in the back of the main floor where local and touring musicians can play. These will include Jamaican musician Alex Marley, a business partner of Pumphrey’s who will be performing at the November 15 grand reopening. Richmond Mayor Levar Stoney will give the keynote address at the reopening.

“Our goal at Lickinghole Creek is to serve healthy and wholesome food options, live music, and microbrewed beer,” Marley said. “It will also help bring peace to the community and show people what Shockoe Bottom could be – a nice mix of people.”

Upstairs will be more lounge-style seating. Food will be served on both floors by one of Lickinghole Creek’s business collaborators, Firesides. Firesides is owned by chef Milton Lee Gutierrez, who prides himself in using local ingredients in creating his recipes, which are seasonal and paired with whatever Lickinghole Creek has on tap.

“I want to support local businesses and farms that are alongside me,” Gutierrez said. “I want customers to be able to grow, in the sense that they learn about their beer and how to pair it with good food.”

Near the entrance, Lickinghole Creek’s drink products, hemp products, and other merchandise will be available for take-home purchase.There will also be a microbrewery in the location, where brewers will create experimental brews that they might otherwise not have an opportunity to do at their Goochland location or elsewhere. In the basement, there will be a hydroponics garden that will be used for their brews and food products.

All of this, Pumphrey said, is in an effort to use Lickinghole Creek’s popularity to help revitalize the Shockoe Bottom community.

“Instead of seeing people running away from the problem, we go and face the problems,” Pumphrey said. “We work together with the community to bring safety, security, a better quality of life, and economic stability.”

Part of working with the community includes recruiting new employees from the local area and training them to become craft brewers for Lickinghole Creek. As time goes on, these brewers will grow and possibly even branch out on their own to start more businesses in the area, Pumphrey said. The hydroponics garden in the basement will also help teach locally recruited employees how to use urban agriculture in their own community. Pumphrey’s ultimate goal is to help members of the local community live more stably.

“I’m a big proponent of helping people making the right choices of their own accord, not because the government or someone else forces them to,” she said. “But if we can facilitate all of us coming together to make the community better, that’s when it works.”