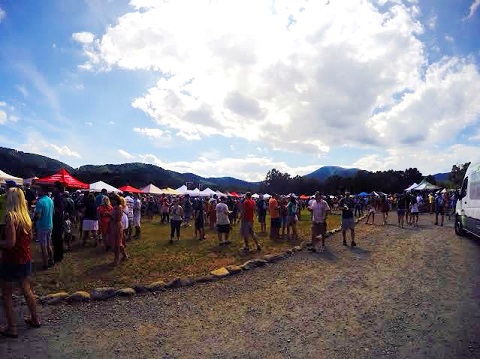 Thousands flocked to Devil’s Backbone in Nelson County this past Saturday to taste, sample, gulp and guzzle their way through beers from 61 breweries across

Thousands flocked to Devil’s Backbone in Nelson County this past Saturday to taste, sample, gulp and guzzle their way through beers from 61 breweries across Virginia at the 4the annual Virginia Craft Brewers Fest.

The festival, which has been growing each year since it started at the Roseland brewpub, was a hit again this year and broke previous attendance records. 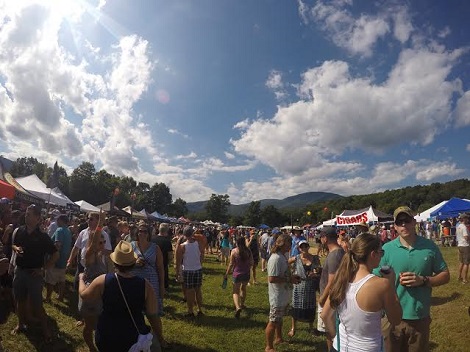 Caryn Durham, Communications Director for the festival and the Virginia Craft Brewers Guild, said the craft brewers fest sold out again this year, with 3,000 people in attendance.

Looking across the vast, grassy brewpub with the large Blue Ridge Mountains as the backdrop there were people young and old, and brewery tents lined up side by side as far as the eye could see.

It was a perfect, hot sunny day and craft beer lovers anxiously waited in long lines to get their 2 ounce sample from each brewer to quench their thirst. Most brewers were serving up just a couple beers, but others had a little more for those up to the challenge. 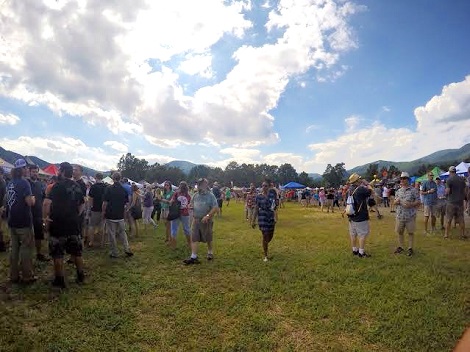 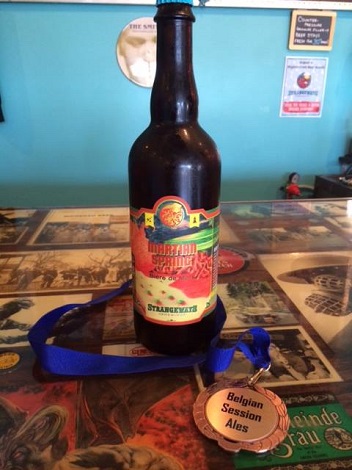 The Virginia Craft Brewers Cup competition was the main event of the festival. Ya know, besides the beer. Over 300 beers were entered for review in 24 categories with a gold, silver and bronze medal for each. The judging took place Saturday, August 15th at Port City Brewing in Alexandria, Virginia. Brett Vassey, President and CEO, Virginia Craft Brewers Guild, presented the awards.

Of the twelve Richmond-area breweries represented at the festival, eight of them took home awards for this year’s Brewers Cup including Strangeways, Triple Crossing, Extra Billy’s, Lickinghole Creek, Hardywood, The Answer, Garden Grove, and Midnight Brewery. Check out all the winners below. 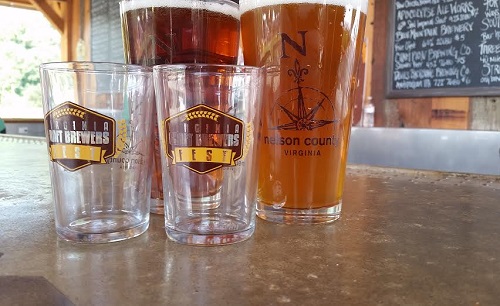 The most exciting news out of the festival was The Answer Brewpub taking home the best in show for its Larceny beer.

Head brewer, Brandon Tolbert, was there at the festival to accept the award and as you can see from the photo as he help up the big brewers cup for the crowd in all its glory he was pretty jazzed for the win. 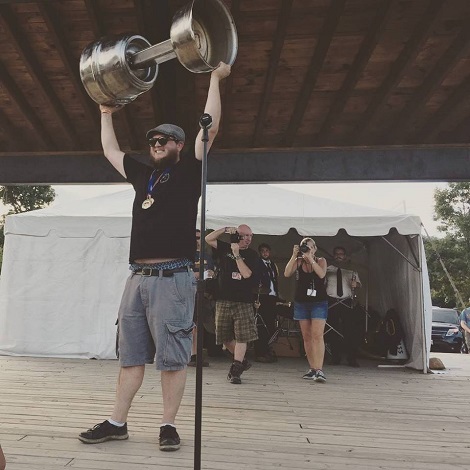 “I certainly didn’t expect anything, but I thought we had a fair chance with all our entries,” Tolbert said. “I was glad to hear that we placed.”

Tolbert also mentioned The Answer has a few beers that do really well and Larceny was among them and they were able to get that one in before the competition deadline.

We have three main beers that are on more often than not; Petty Larceny, Larceny, and Grand Larceny,” he said. “They’re all rather popular.”

It was The Answer’s first time at the festival so taking home this award when Devil’s Backbone has been the winner the last few years is quite a big deal for Richmond.

Tolbert said The Virginia Craft Brewers Fest is a great festival and he expects they’ll attend next year.

The West Broad Street brewpub also took home the bronze for its Imperial IPA, “Hard in the Paint.” 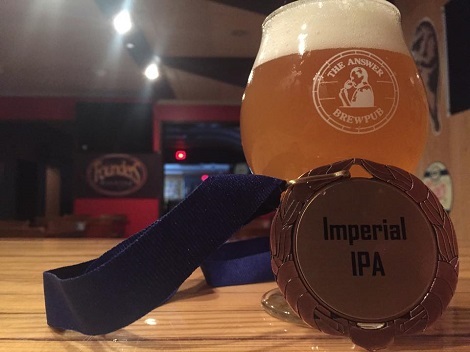 The day was filled with tons of craft beer, food vendors, arcade games and people setting up cornhole in just about any space they could find.

Besides food and beer vendors there were a couple other vendors including Capworks, a Richmond-based business that makes art out of beer bottle caps. Check out our story on them here.

Legends was there and served up its “Z DAM,” a pale-gold ale that sports a light body and a clean malt flavor, that’s one of the brewery’s summer seasonal. 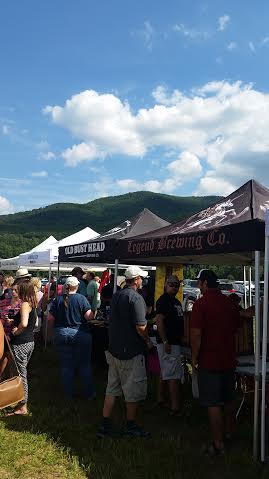 Blue Lab Brewing Company, a brewery out of Lexington had a Green Chile Ale that was absolutely incredible. You need to hunt it down and try it if you haven’t already.

Parkway Brewing had a spicy autumn ale called “Seeing Colors” that as much as I love summer made me long for fall, campfires and hiking just a little bit. 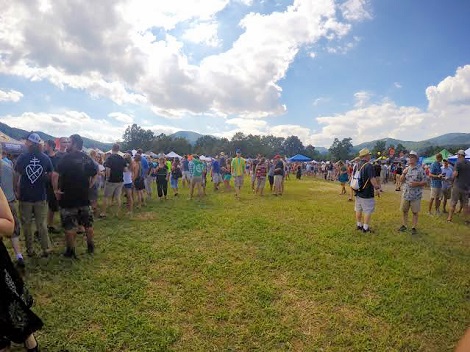 Starr Hill was out there representing their brewery with its popular Northern Lights beer and their newest beer, the Whiter Shade White IPA which we reviewed here.

There were a couple breweries that were first-timers at the festival this year. Fair Winds, a brewery out of Lorton, Va. just opened in March.

Belly Love, a Purcellville-based brewery just opened eight months ago and was super excited to be at this year’s craft brewers fest. 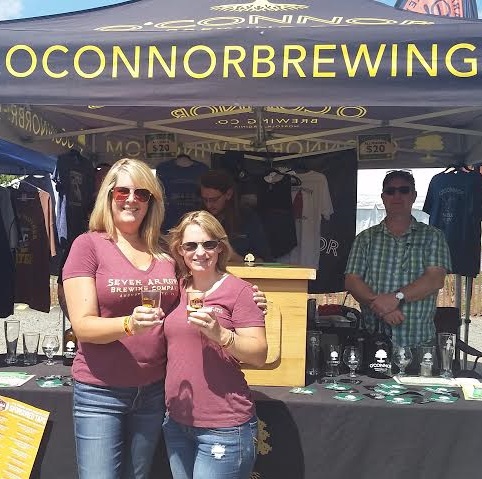 Those with VIP access, got to head into an air-condition area and check some brewers pouring some different beers and listen to them talk about what they were serving. Champion Brewing Company served up a Fruitless Double IPA, Capital City Brewing had an English Summer Ale, Ashland’s Center of the Universe was pouring their Monkey’s Uncle Lemongrass Tripel, Chaos Mountain Brewing poured a Cocoborealis, Old Bust Head Brewing served up their Old Jail, Sunken City poured its Nachthexten Wheat Bock, Three Notch’d Brewing poured attendees its “Brettadocious” IPA and Triple Crossing had its popular Falcon Smash for people to taste. 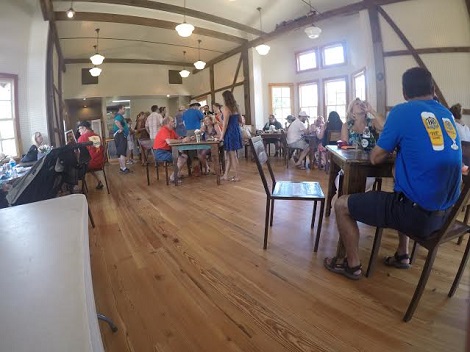 So no shortage of beer here to sum it up.

Attendees could also venture inside Devil’s Backbone to escape the heat and drink some more beer which they did. It was wall to wall and people were just as friendly and happy to be out and talking about craft here.

The food trucks at the festival had this year were delicious. My boyfriend and I had “booze-infused” sandwiches from Spiked, a food truck based out of Charlottesville. 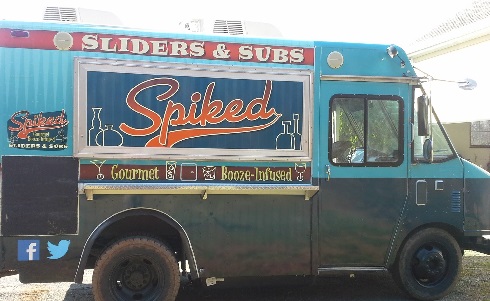 Smojo Smoothies was also there selling all sorts of tasty drinks. The Pie Guy, an Australian food cart that sold sweet and savory pies was there as well and I wish I would have stopped there because they looked so good! Morsel Compass was an interesting truck that my boyfriend hit on the way out. They had everything from Chicken “Slawsage” with Chipotle Slaw to Tandoori Chicken and chips and salsa on their menu.

The live music on Devils Backbone’s gigantic stage was the perfect sound for the day. The festival had Fredericksburg’s ELBY BRASS cranking out their heavy horn funk tunes and it just made for a perfect day of live music, excellent weather, tasty eats and of course good Virginia craft beer.

It’s a festival that’s not to be missed so if you couldn’t make it up to Nelson County’s Virginia Craft Brewers Fest this year, be sure to be there next year because I’m sure it will be bigger and better than ever. Cheers!

This Month, Virginia Gets In The Spirit

Since 2016, the Virginia ABC has celebrated September as Virginia Spirits Month. This year, they're stepping up their campaign to bring... READ MORE

This Month, Virginia Gets In The Spirit

Since 2016, the Virginia ABC has celebrated September as Virginia Spirits Month. This year, they're stepping up their campaign to bring... READ MORE