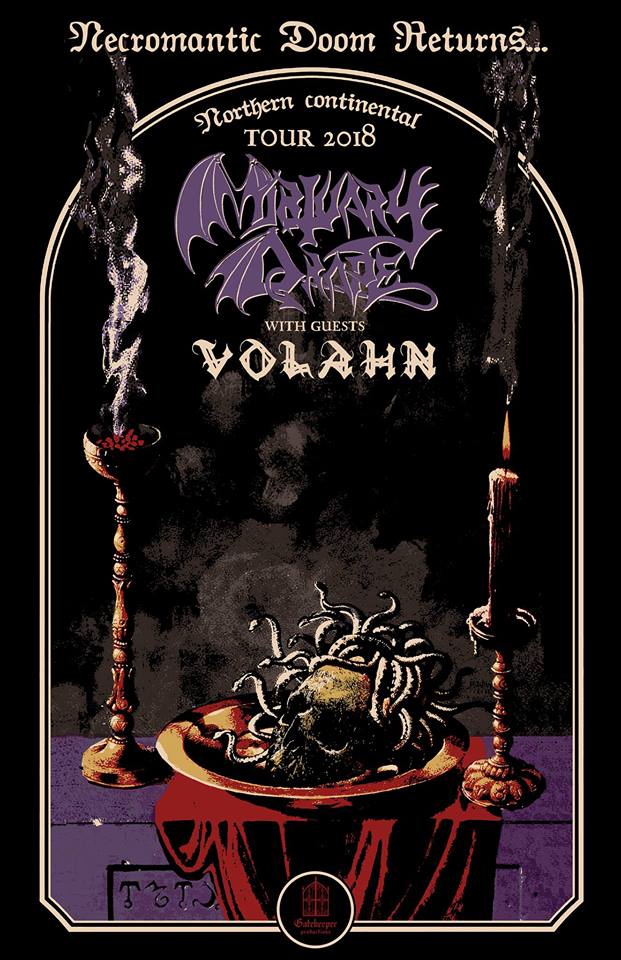 Honored once again to host Italian death/black pioneers, the unholy MORTUARY DRAPE! For 32 years, central and founding member Wilderness Perversion has been cranking out essential slabs with a revolving cast of aptly named freaks such as Abysmal Wizard, Seeker of the Unknown, Arcane of Veiled Light, Left Hand Preacher, Old Necromancer, Without Name, Cruel Abbot, War Machine Helgast and even Emilio Cornaglia!

To have them back is a treat, especially with support from the mighty VOLAHN, the centerpiece behind Los Angeles’ Crepusculo Negro Records and Black Twilight Circle! For those who don’t already worship Black Twilight, it’s one of USBM’s finest micro-scenes led by Eduardo Ramirez (aka Volahn themself) featuring rulers such as Axeman, Ashdautas, Arizmenda, Shataan, Blue Hummingbird on the Left and even the d-beat/punk inspired Zoloa! For Ramirez, unlike other USBM, the BTC/CNR tribe serve as a conduit for spreading K’iche’ culture and Mayan ancestry. “Music was was part of every ritual my ancestors did, from going to war to having astrological ceremonies. Black metal is really harsh and ritualistic music, so it was perfect for me.” We also just added veteran Richmond horde BATTLEMASTER as well as the tour kickoff of RVA’s newest blackened cult, VOARM, get your tickets and prepare to be annihilated!!
__________________________________
MORTUARY DRAPE (Translated from Italian): The MORTUARY DRAPE were born in 1986 for the intent of a central nucleus of three people of which only one (Wildness Perversion) is still part of the formation. The musical and inspirational directives in which the original components are oriented are ‘black metal’ animated by an esoteric-necromantic current both for the texts and for the scenographic impact: they baptize their style as ‘black-occult metal’

The following year, 1987, they published the first demo-tape, “Necromancy” whic collects excellent responses in the most intransigent underground environments, a demo that is destined to become in the following years an authentic cult-demo for lovers of the genre. In June 2009 the band underwent a sudden upheaval and Wildness Perversion remains the only member of the band, concentrating alone on the writing and arrangements of the successor of “Buried in Time.”

In May 2012 they were requested as a special guest at the Maryland Death Fest and have continued to dominate the United States. Stay tuned for news about the future of the band, 2016 Marked the 30 year anniversary of Drappo activity, they are working hard to ensure new concert and record surprises. In Spiritual, The 13 Drape
_____________________________
VOLAHN:(Eduardo Ramirez aka VOLAHN’s teenage fandom was born out of the standard metal building blocks of Slayer and Metallica, then took a turn toward the darker-edged chaos of European black metal. But when it came time to create his own music, Ramirez took inspiration from a life-changing trip to Guatemala at the age of 17. His mother’s Guatemalan ancestry dates back to the K’iche’ Kingdom, which prior to Spanish colonization was one of the most powerful kingdoms of the Mayan civilization. Ramirez had visited his mother’s native land multiple times growing up, but this teenage trip was most profound.

“I was taken to the ruins of our actual tribe,” Ramirez says. “Our elders took me to the top of the temple there. As I stood atop the temple, I could see the whole valley where our people have lived for so many generations. It was a deep spiritual moment in my life, and it was where I came up with the name ‘Volahn’ for my music.” Through Volahn — a word he created and says means “ritual chaos” — Ramirez has created black-metal soundscapes that are both sprawling and caustic. He self-releases his records, along with those by other like-minded extreme-metal bands, through his label Crepúsculo Negro, also known as Black Twilight Circle.

Despite releasing albums as Volahn since 2008 and working with other bands on his Crepúsculo Negro label, Ramirez has only recently begun interacting with the rest of the local metal scene. He attributes his isolation not only to wanting to avoid outside influences on his music but also his desire to learn everything about the recording and distribution process. “We weren’t satisfied with the sound recording in other studios,” Ramirez says. “So we basically started from scratch, learning how to record ourselves. I think it helped all of our bands grow musically together. We keep focus by maintaining solidarity within our circle and keeping private and secretive.”

This focus has allowed Ramirez and fellow members of the Crepúsculo Negro roster to be some of the most prolific in today’s metal scene. Though a recent label compilation, Tliltic Tlapoyauak, features 16 different bands, the actual number of musicians is much smaller. Members of the Black Twilight Circle collective usually play in multiple bands, a byproduct of Ramirez keeping his musical endeavors close to home. His friendships within the collective often date back to his childhood years. Not all bands released through Crepúsculo Negro share Volahn’s focus on ancient civilizations, but at the core of the collective’s kinship is a shared admiration for their pre-Hispanic ancestries.

In addition to their studio output, Ramirez and Campos (of BHL) see their live performances as a deeply profound extension of their quest to honor their ancestors. “I feel like when we play live, it’s like a ritual,” Ramirez says. “When I play live, I feel like I’m in a meditative state. A big part of shamanism is meditation… extreme focus and having the feeling of other worlds beyond yourself. A show is not just us playing metal and headbanging. It’s a deeper meaning beyond just playing our guitars.”

Eventually, Ramirez wants to take his music to the land of his K’iche’ ancestors in Guatemala. “My ultimate goal would be to play at one of my ancestors’ ruins and do a generator show at a temple.”