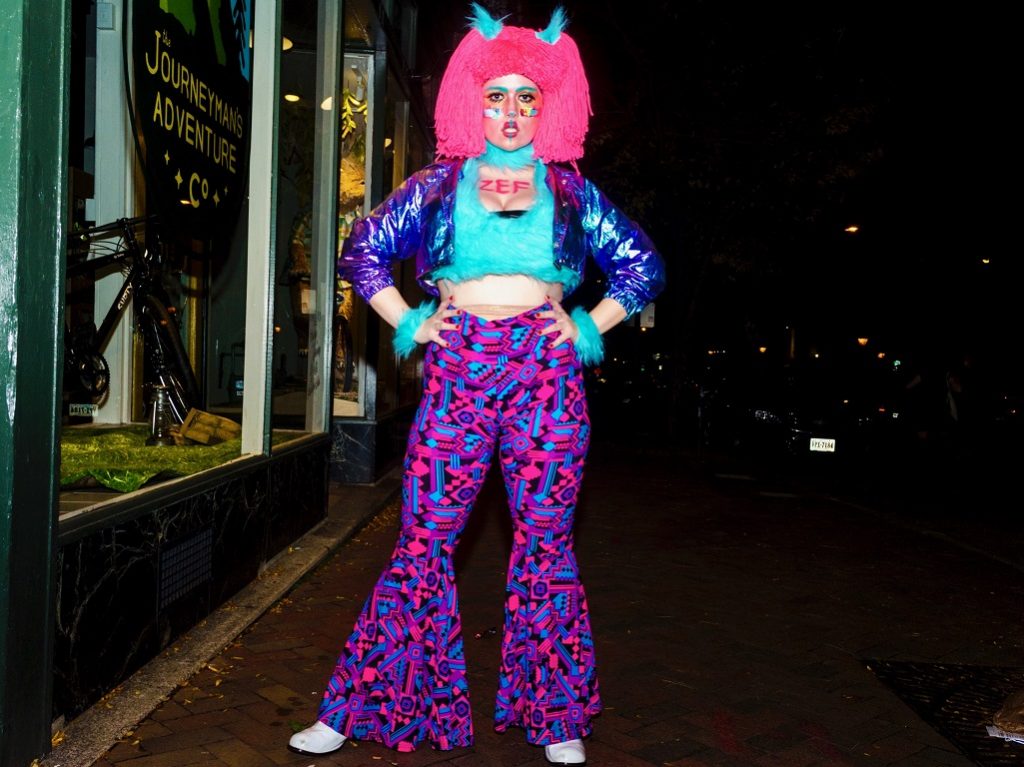 Claire Gates has a busy theater career. But whenever she finds time, she paints her face, dons a wig made from yarn, and becomes Sweet Pickles, a rising star in Richmond’s ever-growing drag scene.

“The way I like to describe myself is like I fell into the discount bin at AC Moore. I look like a dancing troll with an AC Moore rewards card,” Gates said. “I still look feminine and girly, but with a crafty and creative twist, which I think has become my niche.”

Gates’s love of craft stores comes through in her signature handmade wigs which she creates from unconventional materials like yarn, ribbon, and tinsel.

“I’ll walk through AC Moore looking around, and think, ‘I can glue that to my head’ and make a wig out of it,” Gates said. “Sometimes it works and sometimes it doesn’t, but it’s always fun to look at.”

Gates’s drag name, Sweet Pickles, comes from a childhood nickname given to her younger sister by their father.

“I thought the right drag name would just come to me,” Gates said. “I was lying on bed trying to go to sleep and then it popped into my head. I texted my sister in the morning just like, ‘I’m gonna use your name as my drag name’.”

Gates began performing 11 months ago, getting her start at Wicked Wednesday, a variety show and talent competition at the Shockoe Bottom fetish club Fallout. With her first number set to “Crayons” by CupcakKe, Gates used actual 64-packs of crayons to create jewelry, a headpiece, and even an elaborate wire cage skirt covered with glued-on crayons, which she made in collaboration with her partner.

“I spent the whole month of June piecing together my outfit, getting everything, making all the details perfect,” Gates said. “I competed with two other people, and I came in dead last.”

This almost ended Sweet Pickles’ budding drag career as soon as it began. “I cried, I was heartbroken, I was devastated. When I got in the car after, I told my partner, ‘I think I made a mistake, I don’t think this is for me,'” Gates said. “But people were supportive — people who saw me that night liked it.”

After her first performance, friend and fellow Richmond drag queen Shanita Quit asked Gates to be her drag mother and welcomed her into Shanita’s drag family, the House of Quit.

“I took that as a really big compliment. A couple days after that I competed in Godfrey’s Idol and made top three, which was a big ego boost for me,” said Gates. “I came in next month for Wicked Wednesday, and I won.”

Competing in drag at places like Fallout or Babe’s Of Carytown pushed Gates to experiment with new and creative ideas, further developing the drag character of Sweet Pickles. Watching her fellow Richmond drag queens perform has been her greatest source of inspiration, according to Gates.

The fact that Gates has so many local inspirations makes it clear that being part of the drag community provides a great deal of her creative fuel.

“Watching the shows here really is my biggest inspiration. It’s what makes me want to go out and work on my craft, be better, be more creative,” she said. “I love what they do, and I want a piece of that. I want to be able to bring to the stage what they bring to the stage.”

As a cis woman, Gates says the Richmond drag community couldn’t have been more welcoming to her, but she wasn’t sure that would be the case when she first began performing.

“Traditionally, [drag] is dominated by queer men — or at least queer people, which I am, but it’s usually not a space for cisgender women,” said Gates. “I was afraid they would think I put less work into what I do because I choose not to modify my body for my drag character. I was afraid I’d be judged for not meeting the hyper-feminized beauty standards that drag is based upon.”

However, she’s been glad to see that none of these fears have materialized. “Everyone’s been really receptive to what I do, even if it’s not their thing,” she said. “People make me feel like I belong.”

Gates came to Richmond in 2014 to study English at the University of Richmond and stayed in the area after her graduation in spring 2018. She lived on campus, which she describes as “a bubble,” for all four years of her time at college, and only now feels as though she truly lives in the city.

Part of what makes her feel connected to the community is her involvement in local theatre. Pursuing a career in stage acting, Gates is often hard at work with auditions and rehearsals. In fact, she will be touring with the Virginia Repertory Theatre from September through December, which will cause a hiatus in her drag performances.

“It’s hard to balance the two,” Gates said. “I devote my time and energy towards theatre, which I want as a have as a career. But when I’m not putting everything towards that, I have drag as a more personal and individualistic kind of medium, where I can do what I want, and not what a director or playwright wants.”

Drag provides Gates an outlet of pure self-expression. It’s a venue in which she calls all the shots, becoming a heightened version of herself rather than a character.

While Sweet Pickles is a drag persona, she is not a character. Gates is not becoming another person when she gets on stage as Sweet Pickles. She is becoming herself, just stripped of the daily anxieties and inhibitions everyone experiences.

“Sweet Pickles is way more extroverted and outgoing, way more bubbly than I am,” said Gates. “But I’m a performer at heart. I love to put on a show, even if it’s just me and my dog. Day to day I try to tone it down, but on stage, I’m fully like, ‘If you are not looking at me, bitch, I will make you look at me.’”

“Sweet Pickles is the real me, the purest form [of] me, but amplified to a hundred,” said Gates. “Me, but in technicolor and HD.”

The Amazon Trail: How To Write A Book

In this month's Amazon Trail, Lee Lynch takes us through the 15-year process of creating her new novel, encompassing everything from a... READ MORE

The Amazon Trail: How To Write A Book

In this month's Amazon Trail, Lee Lynch takes us through the 15-year process of creating her new novel, encompassing everything from a... READ MORE