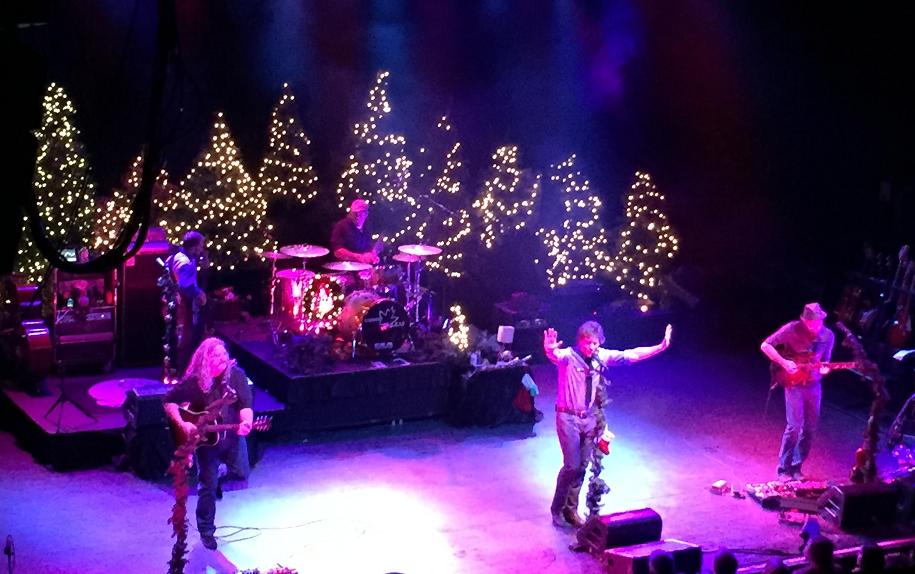 Carbon Leaf had its winter homecoming this past Saturday night at The National, with their annual holiday show full of merry tunes, fan favorites, and plenty of surprises.

Carbon Leaf had its winter homecoming this past Saturday night at The National, with their annual holiday show full of merry tunes, fan favorites, and plenty of surprises.

While the band didn’t set out to make this an annual tradition (as lead singer Barry Privett discussed with us last week), their holiday show has easily become one of their more anticipated concerts of the year–and not just because it’s one of the few times the band plays the city each year. The creativity that goes into each show coupled with the year-end surge of energy from the band always adds up to a great concert and one that over the years has seen crowds grow in both size and diversity. This year’s show was no exception, and also raised the bar pretty high for next year. 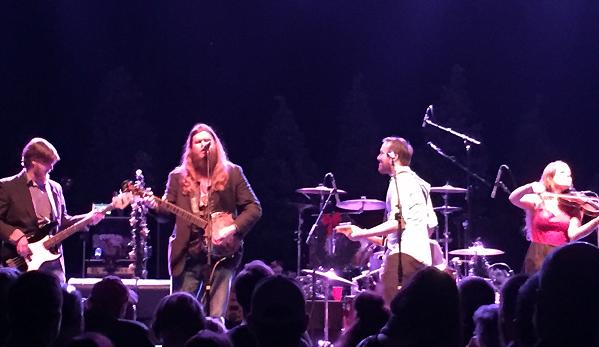 Charlottesville’s Chamomile And Whiskey opened up the show, giving the growing crowd at The National a great taste of their Americana sound. The band’s instrumentation, which included a fiddle and banjo, and the impressive vocals from singer Ryan Lavin, were enough to make anyone pay attention. But what made their forty-five minute set noteworthy and memorable was the outlandish energy that guitarist Koda Kerl had from the get-go. While his vocals and guitar playing were completely in sync with the band, his swagger and on-stage demeanor definitely looked like it was more at home in the area’s thriving punk scene, rather than the Americana circuit. But his energy was a welcome breath of fresh air in a scene that’s becoming more saturated by the day. People were surely leaving the venue as fans of this quintet.

For Carbon Leaf‘s performance, it was business as usual for the hard-working quintet… meaning that it really wasn’t. After being a band for 21 years–a fact they felt comfortable in repeating–you’d expect the concerts to have a high degree of deja vu. This song here, followed by that song here, followed by that little anecdote about that one tour years ago. Sure, there’s stuff you’re going to get in every Carbon Leaf show like the hits (“The Boxer,” “Life Less Ordinary,” etc.) and a killer guitar solo from lead guitarist Carter Gravatt. But there’s plenty of surprises and unique performances each show which compel you to keep going year after year. With their holiday show, that combination is only amplified.

The surprises this year were much more scattered than previous years’, and definitely more than anyone could imagine, as they took the crowd on an emotional rollercoaster. There was a great degree of curious nostalgia as the band unearthed the long-forgotten Echo Echo track “Maybe Today.” Accompanying that song were also feelings of confusion, as Privett sang the whole song while laying on a couch–which was on stage for reasons still unknown. There were humorous moments, like the spontaneous encore, and the moment when Gravatt tried to power through a broken string early in the night. The show also had its somber moments, as the band celebrated a recently deceased fan with an a cappella tribute in the form of “Gloryland,” to the delight of the departed’s friends as well as everyone else in attendance.

While the show was great even before the grand finale, it was the encore that made this show truly classic and definitely made sure everyone got their money’s worth. To kick it off, the band performed their popular novelty song “Carter’s Christmas Beard,” as well as the pretty obscure song “Barbeque,” from the 1977 Jim Henson special Emmet Otter’s Jug-Band Christmas. It was after these songs that things became really interesting–and almost went off the rails. Before the encore’s first song even began, Privett lamented that no one in the audience had bought the band shots this year like they have in the past. Inevitably after the first two songs, a tray of shots made their way on stage for the band to enjoy. Since bassist Jon Markel doesn’t drink, Privett decided to double himself up. Shortly after that, another tray of shots popped up, leading to the band taking another… and Barry doubling again. That large liquid gift fueled an especially raucous version of “The Boxer” that would have easily sent the crowd home happy. 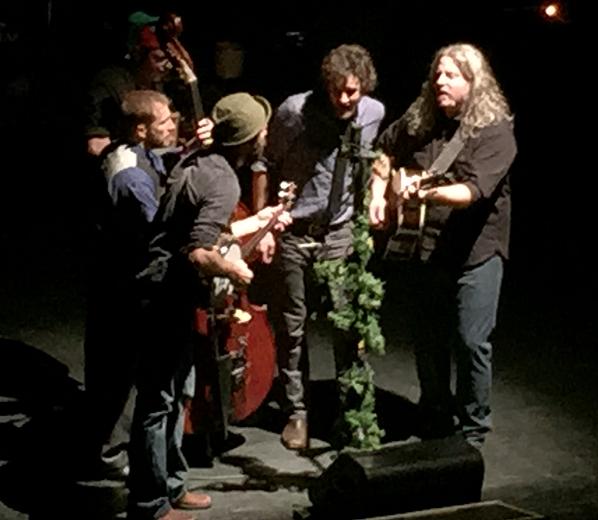 But no, there was more! As the guitarists unplugged their instruments, seemingly done for the night, Privett began hyping the crowd up with words to “Mary Mac,” the popular Irish folk song that the band’s become known for over the years. As the spontaneously inspired frontman continued to hype up the crowd, the band quickly got into position and launched into one of the most unique, bizarre, and amazing versions of “Mary Mac” in their history, even if Gravatt didn’t get plugged back into his amp until half-way through the song. It doesn’t take a genius to figure out that an Irish folksong such as “Mary Mac” is not only rare at a holiday show, but on any show not falling on March 17th. This was perhaps the best holiday gift the band could give to their throngs of loyal fans, and the crowd was more than eager to show their appreciation.

The encore was wild and unpredictable, but really, so was the rest of the night. As mentioned before, the band’s creative surprises have been a staple the past few years at this show, but the band took it to the next level this past Saturday with hardly any effort at all. Calling a concert the “best ever,” even when just referring to a holiday show, can certainly be sigh-worthy hyperbole, but with all that occurred this past Saturday at The National before a packed house of loyal fans, it’s safe to say that this was easily the best “holiday” concert Carbon Leaf has ever put on. Perhaps it was even the best this city has ever seen.

How do they top it next year? Well, that’s not for us to worry about – only to enjoy next December.