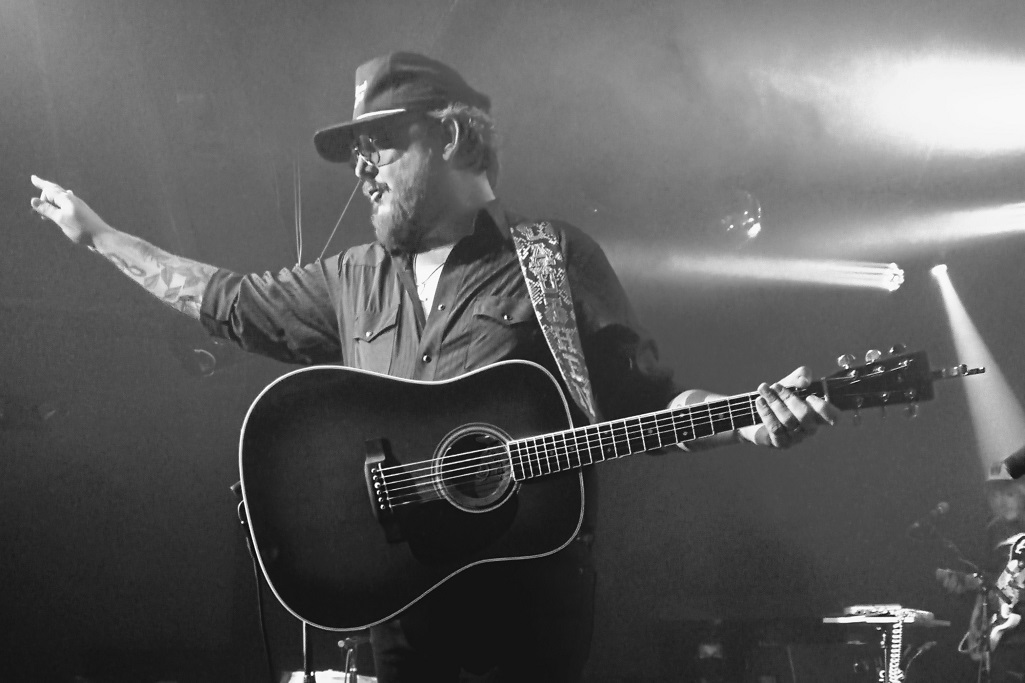 After his show at the Broadberry earlier this month, Ryan Kent spent an evening getting to know country singer and songwriter Paul Cauthen. They talked about everything from drugs and music to religion and self-improvement. Read on for enlightenment.

“Y’all got any cocaine?”

He was slouched in a chair holding a glass of Maker’s Mark when the door opened. Some minutes before that, he’d fallen down the stairs leading from the stage. His tour manager, Ted (a nice dude with an uncanny resemblance to Bob Ross), tossed happy little introductions into the cloudy room before leaving.

The baritone man stood a few inches above 6 feet and was immediately friendly. His graying hair became more apparent while shaking my hand. It was familiar, almost like I already knew the guy.

This was Paul Cauthen. Big Velvet.

His show on October 5th at the Broadberry was like a pair of Luccheses in Boogie Nights. A mink coat in a honkytonk. Equal parts Saturday Night Fever and the Grand Ole Opry. It wasn’t your typical barn dance, and Big Velvet and Co. were phenomenal.

Vocally, the comparisons to Elvis Presley, Johnny Cash, and Merle Haggard are valid. And Cauthen’s big pipes could blow up a hot-air balloon. But comparisons are like opinions, and opinions are like assholes.

Hustle back two years to when Cauthen released his record Room 41. It was written during a squall of professional highs (Rolling Stone ranked his 2016 album My Gospel at #23 on its Top 40 country albums of the year, dubbing him “one of the most fascinating, and eccentric, new voices in country music”) and extreme personal lows. Facing homelessness and heartbreak, Cauthen checked into Room 41 at the Belmont Hotel in Dallas, where he self-medicated and wrote music until 4am. He didn’t just stay there for a week. He was there for two years. Maybe each time Paul answered the door, he was knowingly letting the devil in.

Room 41 was more than just an album. It was a lifeboat in a wild ocean of drugs and alcohol.

One song from Room 41 seemed to levitate across multiple genres. Maybe the better phrase is crossed over. A slow-ride acoustic roll, prowling the late-night streets of Dallas looking for a bag to ignite a rocket. Like any respectable drug song, it makes you want to do drugs. Maybe even dance.

The song is called “Cocaine Country Dancing,” and it’ll be played in strip clubs forever.

I didn’t know what to expect from Paul Cauthen when I sat across from him in the green room. I really didn’t know what to ask the 35-year-old, either. How did he fall into this type of Texan worship/devil music? Is he some pseudo-drug-addled Messiah a la Bocephus? Does he own a Cadillac from 1964?

Does he have any cocaine?

Instead, we went this route. I just listened to him talk.

Come to find out, Cauthen is a fifth-generation minister, having preachers from the Church of Christ on both sides of his family.

“Old school Pentecostal,” he said, “not like snake charmers. It’s ‘repent, be baptized, and you’ll be saved.’ You gotta be baptized in order to proceed into the gates of heaven, accepted by God and all that’s there.”

However, Cauthen said he wasn’t much into those customs. His religious leanings come mostly from the understanding of age-old stories. This mentality seems to have sprung forth from later generations born into Christian families; relaxing the grip on traditions in favor of spirituality and accepting the presence of metaphor in religious texts.

Exhaling a pull from a decorative glass pipe, Cauthen said, “I get into the doctrines of religions for the stories. [There’s] no reason to not [try to] comprehend the books that were written before us that were doctrines for people and humanity for years and years. It’s like history. You don’t have to take [religion] 100% to your heart, but you can learn from it all because [the stories] can become relevant today. I think that’s what I take from it.”

Even with this evolution, Cauthen said people who struggle with faith are misunderstood.

“Have faith in humanity and be good to one another,” he said. “Use the fucking good things from people before us. [It’s] the only way to live. It’s the only way we can evolve. Now, we’re reaching into a realm where people live to 100, because we’re evolving. At the same time, we can take from all these doctrines and actually use the goodness. You don’t have to judge the shit you don’t believe. Fuck it. Forget about it then. It doesn’t make you a fucking asshole. Let people be and accept them for who they are. Be compassionate and loving as much as you can.”

Cauthen said problems arise when people are unsettled, using the Middle East as an example, saying Americans are very fortunate. “Everybody here on this side of the fucking water. Most people in Europe and the UK are fucking fortunate. People in Japan fucking ash cigarettes in their hands and throw it away in the trash. They leave their doors unlocked. There’s something to be said about that.”

His bass player, Jay Greenberg, had been to Japan, but Cauthen hadn’t made it there yet. He said he wanted to visit, but so far he had only heard stories.

“[I heard] people get in [serious] fucking trouble for stealing. So, nobody fucking does it. What’s crazy [is] most people getting incarcerated over there are in their 80’s or 90’s. They don’t have any money [so] they’ll steal or rob somebody in order to get the rest of their life paid for in jail where they can eat.”

Cauthen’s sentiment reminded me, if only loosely, of his song “Freaks” from Room 41.

“Dude” he said, “I love drinking whiskey. I snort my, every once in a while, line of cocaine. I’m not a fucking cokehead like all these songs, but you know, I like doing my crazy shit. All we do is grow up and we all fuckin’ sin, and a sin is a sin. Sin doesn’t [have to be] called a sin by a Christian or Catholic or anything else. It’s just the wrong thing to do. A lot of us have done the wrong thing. How do we learn from doing the goddamn wrong thing?”

Personal histories can be rough to reevaluate, and despite the party, Paul Cauthen has seemed to take his past on the floor for a slow dance. Not necessarily flaunting his rougher days as much as having accountability with the potential for growth and wisdom.

I told Paul I think often of the things I’ve done that I’ve eventually written about. Things that made me not want to keep being that person.

“You’re learning from it,” he said.

Yeah, learning from it, I repeated.

“[There are] so many signs that people don’t even look at in the world, It’s like – learn from it. It’s about compassion. It’s about being humble. It’s not about caring about money or anything like that. It’s about lifting others. I’ll probably have this on my grave one day: ‘We’re all just granules of sand in the desert.’ If we lift up too soon, and we only think about ourselves, the rest is gonna cave. If we stick and hold onto it for a minute with each other, we can make a stable foundation for now.”

Before leaving the green room, Cauthen turned to me and said, “I have a good feeling about you. I’m a good judge. You comin’ with us?”

He certainly meant what he said about lifting up others. He wasn’t preaching, and it wasn’t hyperbole. I spent the rest of the evening getting lifted with Big Velvet and his band members. Watched him buy a round of tequila for the patio (but not me) at Cobra Cabana and pay each of his band members’ tabs. Lots of stories were told and everyone was invited.

Five of us climbed into the cab of a pickup truck, while three more hopped over the tailgate for a 3AM drive down Broad Street to their hotel. Paul was in the passenger seat crooning old country gold, and two of his band members were singing along with him. It was a good evening to be awake in Richmond, VA.

Later, I wondered at what point during the evening I had forgotten to be some dude writing an article for RVA Magazine and allowed myself to relax. Probably right when Ted opened the door to the green room.

“Y’all got any cocaine?”

On October 5, I was absorbed by Paul Cauthen the same as everyone else. He must’ve thrown his arm over my shoulder half a dozen times that night. It could have been for show, but it wasn’t. He was just too goddamn genuine. And high as shit.

Sometimes you just gotta let the devil in.

Photos by Ryan Kent, except where noted

Ryan Kent is the author of Hit Me When I'm Pretty, This Is Why I Am Insane, Poems For Dead People, and EVERYTHING IS ON FIRE: SELECTED POEMS 2014-2021. His debut album DYING COMES WITH AGE will be released in Fall 2021. Ryan contributes to RVA Magazine and Ozy.com. He maintains a pack a day habit. (Photo by D. Randall Blythe)

Grab Your Plates, Richmond: Here Are Some Great Local San...

We here at RVA Mag have never made a secret of the fact that we love sandwiches. But there's one thing we've never been able to decide:... READ MORE

When Steve Martin and Martin Short came to the Altria Theater on October 22, they proved that comedy doesn't have to be edgy to be... READ MORE

RVA Shows You Must See This Week: December 1 – Dece...

The Remains Of The Day

When George Wethington headed to the Broadberry for an early November evening of live music, he was thinking about the aging process --... READ MORE

Grab Your Plates, Richmond: Here Are Some Great Local San...

We here at RVA Mag have never made a secret of the fact that we love sandwiches. But there's one thing we've never been able to decide:... READ MORE

When Steve Martin and Martin Short came to the Altria Theater on October 22, they proved that comedy doesn't have to be edgy to be... READ MORE

RVA Shows You Must See This Week: December 1 – Dece...

The Remains Of The Day

When George Wethington headed to the Broadberry for an early November evening of live music, he was thinking about the aging process --... READ MORE