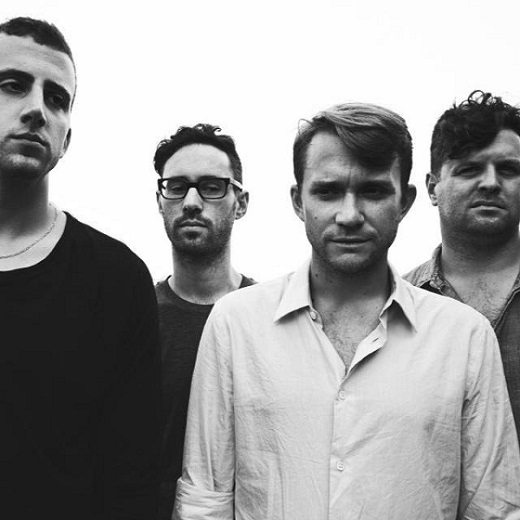 The career Cymbals Eat Guitars has had thus far gives insight into where the music industry is today.

The career Cymbals Eat Guitars has had thus far gives insight into where the music industry is today. The New Jersey quartet is extremely talented without a doubt, but it’s been an uphill battle for the band since day one, even after the band caught fire early on with incredible buzz. It was their debut record in 2009, Why There Are Mountains, which had critics and fans clamoring and led to them being in high demand for the concert circuit, but also meant they now had to shoulder ridiculous expectations for their follow-up.

Lenses Alien, the band’s 2011 follow-up album, was a perfect continuation of their sound, but in an age where being a true rock band is almost detrimental to your success, the band started to lose a bit of the buzz. Still, the band wasn’t going to pin the blame on the ever-changing industry and its current trends. Instead, they set out to get back to where they were as bassist Matt Whipple describes.

“The experience of making a third record was certainly different than making a second record after a buzzy debut,” Whipple said. It was definitely the first opportunity we’ve had to make the record we wanted to hear at that moment and be a little more liberated from the pressures of ‘the big follow-up.’ In a lot of ways, we made the record we probably should have made as our sophomore LP, but we’ve never been able to follow a very calculated path.”

LOSE came out last year and was able to capture a lot of the critical attention and buzz that the first album gave them back in 2009, even if the band was almost over the idea of “buzz” being what they really wanted. “We don’t really think about our career in those terms,” Whipple explained. “Of course we want to do well, but connecting with actual people is the goal, as opposed to like how many times Pitchfork mentions us leading up to the release. Best New Music is a great bump, no doubt, especially when it comes to booking summer festivals, but we’re kind of trying to transcend buzz as opposed to sustaining it.”

Transcending the buzz though is hard for any band, let alone a rock band in an age where people are hilariously pondering if rock is actually dead. “Someone who only really consumes music via Spotify new release playlists and only experiences live music at Coachella would probably say those things, but you only have to be slightly more engaged than that to realize there are tons of amazing, vital rock bands out today.” Whipple and the rest of his bandmates fully realize this as they’re quick to not only gush about bands like Tame Impala and Titus Andronicus, but also really talk about the competitive fire that they light under them as artists. While it’s a famous story in music history from The Beatles and The Beach Boys trying to one-up each other all the way to Blur and Oasis dueling it out in the 90s, it’s become passé by now with artists quick to deflect or give a generic answer.

“We’re very competitive, maybe sometimes to a fault, but it certainly pushes us to be better. I think social media can make artists a little cagey when it comes to praising someone else’s work and I hate that. There’s nothing wrong with recognizing that someone made a great record. I can’t wait to hear the new Titus record – I’m sure we’re all going to hear it and think ‘We have to make a better record than this.'”

The loss of a competitive nature isn’t the only big change to music in the past decade or so though, something Whipple poignantly elaborated on.

“I think rock music dominated by straight, white men is on its way out. When I started writing songs as a teenager, I used to think that no one would want to listen to what I made if they knew I was gay, which seems totally silly to me now. Women, people of color, and queer people are not a new phenomenon in rock music but I think there is a societal trend towards more inclusivity and people being able to take up their space and speak up from their true perspective and I think any general uptick in quality rock music is due in large part to that.”

While it may seem silly, it could have been an uphill battle for the band and Whipple in general, but then again the band has faced numerous uphill battles in their career. At the forefront of these battles though, is just the ability to stay together as a group through multiple years, which seems harder than ever in 2015.

“When we first started, we were all living in New York, all ready to put everything on hold and go along for the ride. And now that we’ve been doing it for a few years, our personal lives have diverged a little, especially geographically, but the silver lining is that now when we go on tour, it’s a chance to hang out that we don’t normally get.”

The touring life seems to be the glue for the group. The band’s always had a strong live show, but that live reputation was only elevated in the last year as they toured behind LOSE with a focused, but still unpredictable energy night in and night out. The band even mixed it up a bit too, booking some house shows last year when other bands their size would laugh at the idea.

“We love doing house shows. It sounds so much worse, but feels so much better. We kind of missed the heyday of Brooklyn DIY a few years ago because our agents and managers at the time kind of just sent us out on tour in big venues for a year as soon as we got Best New Music, which didn’t really help us grow an audience or grow as a band. Now, especially if there is no other option for an all-ages show in a particular place, we’re super down to do DIY shows.”

Still, Whipple admits that the band may be outgrowing those shows. “If we have to stop doing house shows because attendees’ safety couldn’t be adequately provided for, that would be a bummer, but we’re not there yet. We did one house show last year that did get uncomfortably crazy though, so I don’t know. We may be getting there.”

While house shows are out of the question, there is another avenue the band is more than excited to take on. “Boat shows are underrated. We definitely haven’t played enough boat shows.” It may seem like a joke, but as the conversation with Whipple continued, he dropped more and more references to an aquatic venue and at one point frankly stated, “I really can’t over-stress how much we’d love to play on more boats.”

While they are just a rock band, Cymbals Eat Guitars are unique in today’s music world and clearly wired in a completely different manner than other bands and artists. “After almost six years, it feels like we’re just getting started creatively speaking, and I hope we never lose that feeling,” remarked Whipple. That feeling is what drives the band to this day and makes their music and live shows connect with so many people, even in an age where loud guitars and drums seem to be fading out.

Who knows where Cymbals Eat Guitars goes from here? Life is always uncertain, but in talking to the band, you can figure out that the band has a lot more to prove to themselves, their contemporaries, and their fans. More importantly though, the band still has a lot more boat shows to play.

Cymbals Eat Guitars play Strange Matter this Saturday for a late show alongside Forth Wanderers and Lightfields. For more information on the show and where to buy tickets, click here.