People tend to think punk rockers are real nihilistic types — people who smash bottles, knock over trash cans, and generally walk around not giving a damn about anything. If you’re actually part of the punk world, though, you know that punk is actually about wanting to change the world we all live in for the better, in as many ways as possible. It’s that exact message that long-running Richmond 501(c)(3) charity Punks For Presents puts into action every year for over a decade now, by raising funds to donate Christmas gifts to children and their families who are receiving medical treatment in local hospitals.

“It’s all about providing a holiday for the children while at the hospital and bringing them a little happiness to make the experience a little better,” Chad Painter, manager of Wonderland and one of the organizers of Punks for Presents, said in a statement. “It takes a collective effort so we can make some sick kids and their families feel better, even for a moment.”

Punks For Presents’ annual efforts to help kids and their families in times of need are always a highlight of the Richmond music scene this time of year. And why should 2022 be any different? Well, it’s not, unless you count this year’s multi-weekend Punks For Presents extravaganza being one of the biggest they’ve ever done! The festivities will last five full nights, spread across the next two weekends, and you’re definitely going to want to hit up as many of these performances as possible.

Things kick off on Thursday, December 8 (that’s tonight!) at Cobra Cabana, where local comedian and raconteur extraordinaire Mike Engle will host a bill of comics coming together to tell jokes for a good cause. Featuring leading lights of the Richmond comedy scene like Nick Deez, Mary Jane French, Jesse Jarvis, Lucy Bonino, Patrick Buhse, and more, this show is going to keep you laughing all night, secure in the knowledge that your door money went to help bring smiles to the faces of hospitalized children and their families. 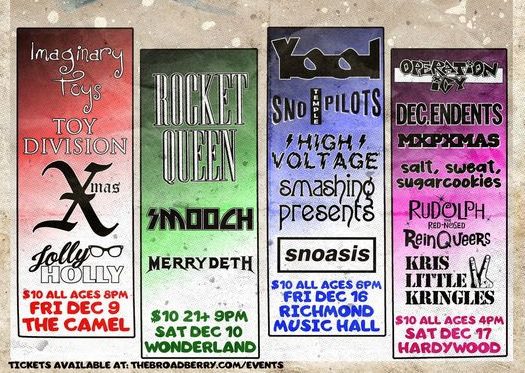 Of course, this is just the warmup for the thing we’ve all been waiting for: the onslaught of Christmas-themed punk, metal, and goth tribute bands that has been Punks For Presents’ main stock in trade the entire time they’ve been doing their good works in RVA. Things start out on Friday, December 9 at The Camel, when Richmond’s veteran Cure tribute act, Imaginary Boys, don Santa hats and sleigh bells to become their yuletide alter ego, Imaginary Toys! The bill will also feature Joy Division tribute act Toy Division, X tribute combo X-Mas, and Buddy Holly tribute Jolly Holly.

Saturday night, December 10, the action moves to Wonderland, the ancestral home of Punks For Presents, where legendary Guns N’ Roses tribute act Rocket Queen returns to action once again to enthrall us all. They’re accompanied on this bill by SMOOCH, who are, one assumes, a mistletoe-themed take on KISS? What the hell, I’m here for it — I just want to know how they’re going to do a Christmas-themed version of KISS’s notorious makeup. Only one way to find out! Also on this bill will be Merrydeth, whose take on Megadeth is sure to be a lot of fun.

The next weekend, it starts up once again on Friday, December 16 at Richmond Music Hall at Capital Ale House, with an evening headlined by Yool. Yes, that’s right — Christmas-themed Tool tribute! Thank goodness there aren’t 10,000 days between each Christmas, that’s all I gotta say about that. Well, that and the musicians who are doing this one are clearly gonna be some insanely talented players, which should make their performance extra fun. Opening acts on this one include Stone Temple Pilots tribute Sno Temple Pilots; AC/DC tribute act High Voltage, who seemingly are not taking on a Christmas-themed alter ego, but will hopefully still bring the schoolboy uniforms; Smashing Presents, the Christmas-themed alter ego of Smashing Pumpkins tribute act Geek RVA; and Snoasis, a yule-themed Oasis tribute that has me asking: is this going to be Madferit in Santa hats? Boy, we can only hope.

Things wrap up on Saturday, December 17 with the final Punks For Presents show of 2022, which will be headlined by none other than Operation ICY, an Operation Ivy tribute that’s been doing the Punks For Presents thing for so long now, they’ve got a fanbase of their own, completely separate from that of the classic Bay Area ska-punk pioneers. This show will be a total festivus for those who love their melodic West Coast punk, as Op Icy are joined by Dec.endents, a December-themed pun on legendary pop-punk pioneers Descendents; Mxpxmas, a Christmas-themed take on the Christian pop-punk band who started that whole Tooth And Nail subgenre; Salt, Sweat, Sugar Cookies, a Jimmy Eat World tribute whose name honestly stumped me; Rudolph The Red Nosed Rein-Queers, who pay tribute to band-whose-name-would-never-fly-today Chicago pop-punkers The Queers; and Kris Little Kringles, who bring an alternative yule-ster-ish Christmas twist to the music of legendary Northern Irish punk band Stiff Little Fingers.

Want to go to any — ideally, all — of these shows? Never fear, tickets are easily obtained! Other than the kickoff comedy show at Cobra Cabana, they’re ten bucks each, and tickets can be found at this eTix link (you might have to scroll past a few false positives, but they’re all there, I promise). Cobra Cabana is first-come, first-served, but admission is only $5, and that’s a screaming deal at typical 2022 prices. You can hit all five of these shows for under $50, and since you know it’s for a good cause, and you know it’s gonna rule, why wouldn’t you? Don’t be a scrooge, Ebenezer — rock out for a good cause this year. Support Punks For Presents.