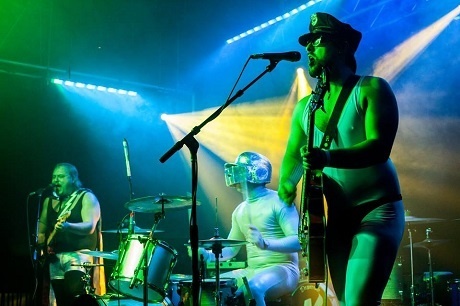 RVA’s costumed rockers Imaginary Sons will be concluding their epic saga this Saturday at The Camel. The band of misfits never relied on fitting into the conventions of rock music and really developed their own vernacular as far as how they operated as a band.

Developing short films, covering everyone from the Beach Boys to songs from the Rocky Horror Picture Show and releasing two beloved full-lengths, the Sons never disappointed any of their adoring fans. Their story is one that speaks to the attitudes of a new generation of musicians confronting any homogenized qualities of rock music and cementing their legacy as one of the integral Richmond bands of the last few years.

The origin of Imaginary Sons began with the trio of bassist Kyle Hermann, guitarist Mike Cruz and drummer Russell Redmond meeting guitarist Tommy Crisafulli. Cruz had invited Crisafulli in to replace a recently departed drummer. As Hermann would describe it, “Tommy came into to play drums and it wasn’t good and we both looked at Mike to figure out what he was thinking.”

Crisafulli suggested that he maybe play guitar instead and Redmond jumped behind the kit. As the story goes, The Imaginary Sons were born and they began to develop their sound through an exercise of learning a number of cover songs while developing original material on the side.

As they started to gel as a band, the first real break the band received was through playing the house show scene. An exercise that introduced them to a number of folks around Richmond that would prove to be some of the greatest supporters of the band. After releasing an EP and playing all around town, they started to land bigger gigs and would eventually record their first full-length Let It Beer after a brief hiatus.

The record, released in 2015, showcased the insane catchiness of the Sons’ material. It also worked towards allowing them to expand their sound by investing in more gear, developing personas that would be portrayed in their short films and continue to win over audiences in town and beyond. Making several appearances at regional festivals, the Sons were showing no signs of slowing down.

News would arrive that Cruz would be leaving the band and the group would be reduced to a trio. In true Sons fashion, the band killed off his character in the short films. They continued to experiment as a trio and this is what would work towards developing their next full-length, last year’s Don’t Impress Me. These were some of the favorite moments of being in the band for Hermann and Crisafulli. The two felt that the band truly began to expand their sound and experiment with how they could artistically articulate what direction they wanted the Sons to be heading.

“It was a completely collaborative, active songwriting process. Writing the songs as we were all playing them in the moment,” said Crisafulli. “It helped catch a lot of the spontaneity and improvisation in the finished song. Seeing everyone in the band grow as musicians and people was incredible.”

Right before the release of the record, Redmond would end up leaving the band to focus on school and the Sons were in need of a drummer. This is where drummer Drew Shamyer comes into the story. After having moved to Richmond with his wife in 2014, he quickly learned the material and impressed Hermann and Crisafulli.

Shaymer recalls the experience as “seeing that the Sons were looking for a drummer.” He listened to Let It Beer and knew he had to go for it.

“I sent them a quick crappy video of me playing on my electric kit to prove i wasn’t some troll on the internet and they sent me some songs to learn,” he said. “I tried out within a week of reaching out to them and it went pretty well. I think we had our first show like two weeks later and the rest is history.”

The band celebrated the release of Don’t Impress Me and would continue to celebrate through a number of shows throughout 2016. Some of those included a final appearance at the Pink Moon Festival and a coveted residency at The Camel.

As the story comes to an end, everyone is saying goodbye to the Sons with the kindest of hearts. It’s an experience that changed the lives of everyone involved and it made them stronger as artists. Crisafulli goes into a bit of detail about suffering from two brain aneurysms a year after joining the band. It led him to “focus on achieving his dreams of making music a full-time thing” for himself. Whatever it would take, nothing would deter him.

“I couldn’t imagine a greater period of my life sharing a stage with so many of my favorite people,” Hermann adds. Along with the final show on Saturday, the band hopes to release a final four-song EP that will celebrate the end of the band.

The Imaginary Sons will be missed for sure, but the memories will live on forever. In the short span of time that the band was around, they recall a number of epic house shows, release shows and out of town gigs that would take them to towns they never imagined getting to play when the band started. They became a coveted part of the circle of Our House musicians that include Toxic Moxie, Headlessmantis, Grave Hookers, Ashes and Venus Guytrap.

They never ceased to entertain through the variety of creative extensions they engaged with on a regular basis during their tenure. It will be sad to see them go, but everyone that has been a part of the Imaginary Sons experience should be beyond elated by the legacy that they will be leaving behind. As Crisafulli puts it, “if a brain damaged, college drop-out with aphasia can be in a cool rock band you can do whatever it is that you are dreaming of.”

Catch Imaginary Sons’ final performance this Sat., April 1, at The Camel joined by Manatree and Leach. Doors at 8 pm. Music at 9 pm. $5 in advance, $7 at the door. Tickets here.