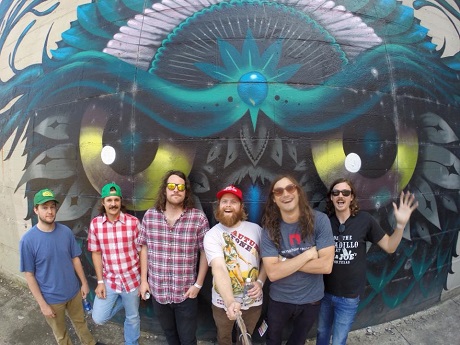 “We ended up with an accidental concept record here.”

“We ended up with an accidental concept record here.”

That’s Carter Kingjokingly describing Futurebirds‘ latest record Hotel Parties (out now through Easy Sound) in perhaps the best way. The Georgian southern rock band has made a name for themselves for the impressive road endurance they’ve shown since their debut back in 2008, but on Hotel Parties, those years spent cooped up in a tiny van trekking down lonely roads at 2am have finally caught up with them.

It’s a somber reflection on how the touring cycle can completely distort and corrupt your line of thinking, but King was adamant that people not read too much into the album’s lyrics or overall feel. “We’re not just these glum dudes all depressed and feeling like shit every day on the road. We still really enjoy touring and playing music live, but it does weigh on you. On anyone.”

One of the central themes explored on Hotel Parties is the dichotomy between personal and professional lives or, in the case of the band, being on the road and being at home. King admits that the struggle between the two doesn’t come from adjustment per se, but more on how the two interact and exist together. “They’re equally comfortable mindsets, but it’s getting them to be comfortable with one another that’s the trick. It’s something we’re always dealing with. We’re better managers at it now, but it’s a constant thing to be aware of.”

Much of the record dates back several years as the band has been stockpiling songs almost and a good chunk seemed to just capture the feeling of despair the band found themselves in while traveling across the country. “They come from a time when we were just touring really, really heavily. Some of the bleaker moments in the band’s history really. We weren’t trying to write about life on the road or anything, but the songs just all seemed to end up like that. All the songs made sense with each other and built on each other so it just made perfect sense for them to exist as a record.”

It’s taken a while for these songs to see the light of day, though King admits it was a very intentional approach. “You just want to make sure you’re doing it right,” he clarified as he detailed just how cautious they are when approaching a new record. “Some people are just shooting from the hip and put out a record in any way they can, but it’s important to us. Not to say it’s not important to others, but we don’t want to just slap it on the mat and be done with it. We want to get folks behind it that are willing to invest their time and money like we did in in order to really help us see it through. That whole process just takes a while and that’s why Hotel Parties took a little bit of extra time to come out.”

Showing patience with the record was for the best as the slow process allowed the band to really capture each song’s thematic essence and really give a voice to that conflict going on with the band members. It’s not a conflict King described as fitting into a Hollywood movie perfectly or even a VH1 Behind The Music special. As he put it, “there was no specific breaking point,” but instead, it was just the road robbing each member of certain things more and more as time rolled on until the band has nothing left in the tank at all.

“You don’t live as close with your sisters and brothers growing up as you do a band on the road. We’re living six or seven people in a little tin box and there’s just never really time for yourself. The only natural thing to do is to breakdown from there. People get on each other’s nerves, specific incidents freak you out, and you get more and more homesick. There’s a definite wall that you hit and we’ve hit it more times than I care to remember. When that happens, it’s just all downhill from there. Your shows just aren’t going to be as good or as energetic or as fresh as they should be and that’s why you’re out there in the first place. It’s just hard not to lose your mind almost.”

The band still values the time and experience that came from that because it ultimately taught them how to conquer the road so they can truly grow as a band and as artists. When asked what the biggest change he’s personally made, King very quickly blurted out: “Sleep! Lots of it!” It’s obvious of course, but for anyone who’s ever travelled to more than five cities in a single week, you can understand just how sleep becomes a rare commodity.

“You just have to get as much as you can because there’s going to be time when you’re just not going to get it. Another thing I learned is that you don’t have to stay up all night just because someone else is or a group is. You can always sneak off and catch a few winks and that’s what you should always do. You’ll thank yourself in the morning. I know I have been more and more.”

The vast majority of people listening to Hotel Parties will never experience the travel that the band willingly agrees too, but the beauty of Hotel Parties is that the personal revelations and introspective themes found on the record come from such a profound place that it’s almost impossible not to relate to the turmoil within the music. Whether you’re someone toiling over a single spreadsheet for four hours or just waiting to end your twelve hour shift at the grocery store, everyone has that feeling of being completely void of energy, yet still needing to give a little bit more. Lucky for us,
Futurebirds have been able to give a clear voice to those feelings and remind us that the end is definitely in sight.

Futurebirds play The Camel this Sunday along with The City Lights and Collin Thibodeauxx. For more information on the show and where to buy tickets, here.