Who’s That Artist On Billboards Around Richmond? - RVA Mag 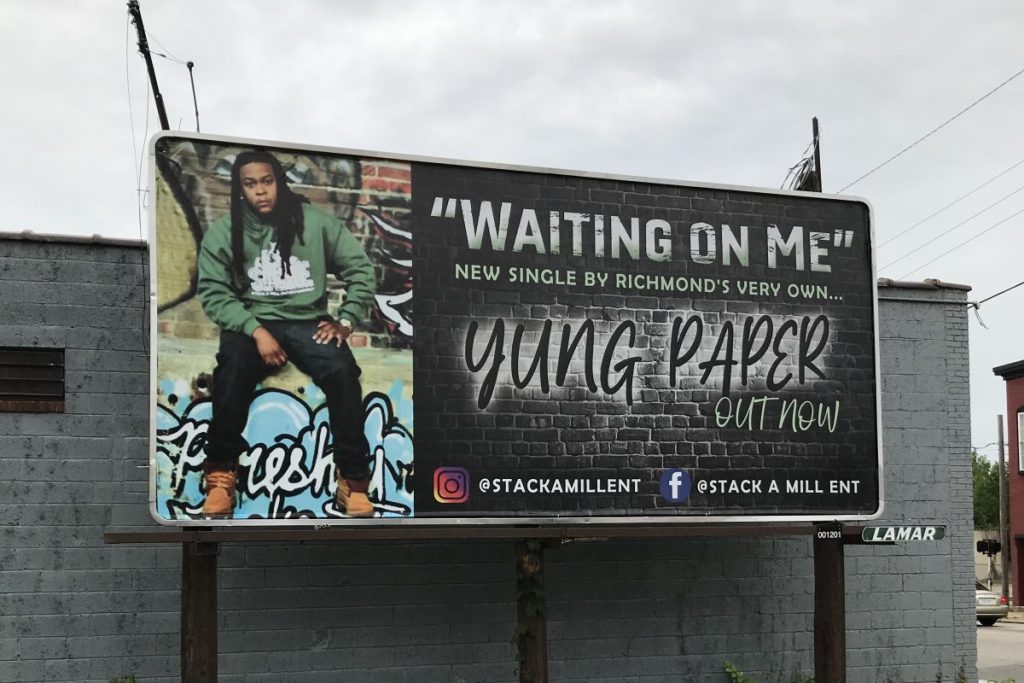 Brothers Yung Paper and Lamont Henry have taken a creative approach to advertising Stack A Mill Entertainment… but unlike others, this entertainment company exists to give back to the local community.

If we ever want to get back to a normal routine, it’s important for everyone to pitch in and do their part to stop the spread of COVID-19. It’s been repeated a thousand times — but what if someone did more than just wear their mask to the store, staying home all day, and simultaneously doing what they loved? What if the music community could inspire others to propose a change toward equality? What if they could locate and deliver the supplies to prevent COVID-19? That’s what Stack A Mill Entertainment are trying to do.

Richmond rapper Yung Paper started making music in his senior year of high school, almost ten years ago. Now, he and his brother Lamont Henry have teamed up to create an independent record label called Stack A Mill Entertainment. S.A.M.E. allows the duo to produce their own music, and they’re using the platform to do more in their community. So far, Yung Paper has released several singles with the label.

“Everybody’s got something they love to do, and for a long time, I was in search of what that thing was. I finally found it in music,” Yung Paper said. “Years ago, we started a label, and it’s doing music locally — trying to brand ourselves to a bigger level.”

His brother echoes the sentiment. “This is something we are both passionate about. I felt like it would be a great foundation to do bigger things, especially for our community,” Henry said.

From the birth of his music career in high school to today, Yung Paper has worked with a wide variety of styles. “We really try to be on both sides of the fence with music, and it’s not just hip hop and R&B,” Yung Paper said. “We love all types of music. There’s no limit to what we’ve made, and what we can make in the future.”

With a growing platform and a newfound independent record label, an opportunity came to get creative with the business. The duo started seeking out new ways to advertise their brand-new career.

“We have billboards on Hull Street and one on Jefferson Davis, right in front of the Old Tobacco Company,” Henry said. With giant billboards hosting Yung Paper’s face to busy streets in Richmond, the feedback has been nothing but positive. “The reactions have been all love,” Henry said. “We’re just regular people, but it’s all love, and it’s getting taken seriously. So it’s been pretty cool.”

Once the billboards were up, Yung Paper started hearing from the community regarding S.A.M.E.

“People contacted me through social media, saying how proud they were when they saw [the billboard],” he said. “I love to see support like that. As an artist, it’s inspiring to keep going. It’s like seeing yourself on TV; you get inspired to work harder, so you can continue to progress and do more things.”

“It doesn’t just bring me and Yung Paper joy,” Henry added. “It also brings joy to people less fortunate than us, whether they know us or whatever the case may be. When somebody sees it, that’s less of a privilege, and more of a thought like ‘Dang, I went to school with him,’ or ‘We grew up in the same neighborhood.’ If he can do it, what can I do, you know what I’m saying?”

While the entire world roughs it out during coronavirus, Yung Paper released a single, appropriately titled “Pandemic,” which speaks to the current economic and global climate. Recording a song during the outbreak has been fairly easy for most artists — but filming a music video during the pandemic, about the pandemic? That’s a different story.

“We captured some of the scenes at the Robert E. Lee Monument, that was pretty dope,” Henry said. “The only challenge about that scene was trying to keep social distancing [while people come] from all over the world to see the statue. Inbetween times of the shoot, we might have to stop because people walk by, but all in all it was really fun.”

“We try to capture a part of history,” Yung Paper said. “Especially to capture the statues with everything going on now. That was awesome.”

Making music isn’t the only thing on the S.A.M.E. brothers’ minds. To them, creating an entertainment company and representing the Richmond scene means serving the community in any way they could, with any free time they had left. Yung Paper and Henry’s latest act of community service includes handing out free masks, hand sanitizers, gloves, and more.

“We try to get out on Wednesdays and Fridays, helping out with meal donations when we’re not handing out gloves, hand sanitizers, and masks with our team,” Henry said. “We always go to the local businesses, small businesses, private businesses. We’re always handing out [supplies] to them.”

For the brothers, it’s a labor of love. Yung Paper and Henry are consistently seeking out new ways to give back to their community.

“If we see somebody less fortunate than us, it makes us sit back [to be] thankful for what we have,” said Henry. “A lot of people don’t have the small necessary things, like hand sanitizer. When we do positive things to put a smile on their face, the satisfaction when that person walks off with their mask or gloves — it’s little, but it’s a big thing to us.”

Along with donating essential items to slow the spread of the COVID-19, Henry and Yung Paper have teamed up with other local organizations. Working with radio stations, small businesses, and charitable organizations (like Radio One, 92 KISS FM, and Human Food RVA), they’ve helped give out over 600 meals, essential items, hygiene products, and even helped pay for less fortunate families’ bills.

“We fundraised over $5,000 to send a kid to Old Dominion University,” Henry said. “We held a seminar for kids at a local barber shop, because we wanted to hear from the youth. ‘How do you feel about what’s going on?’ What do they feel they need to change? Change starts with yourself before you can try to change anything else.”

With a strong head start producing singles, advertising in the biggest way possible, and serving their local Richmond community one mask at a time, the future is looking bright for Henry and Yung Paper. And they’re not slowing down anytime soon.

“At the end of the day, we try to take it as far as we can go,” said Yung Paper. “That way, we can turn around and give it back to our community, and put other people in a better position than they’re in right now. Lead by example. It’s very rewarding to see that.”

To catch up with the brothers behind S.A.M.E., find them on Facebook and Instagram… or on your local billboard overlooking the city.