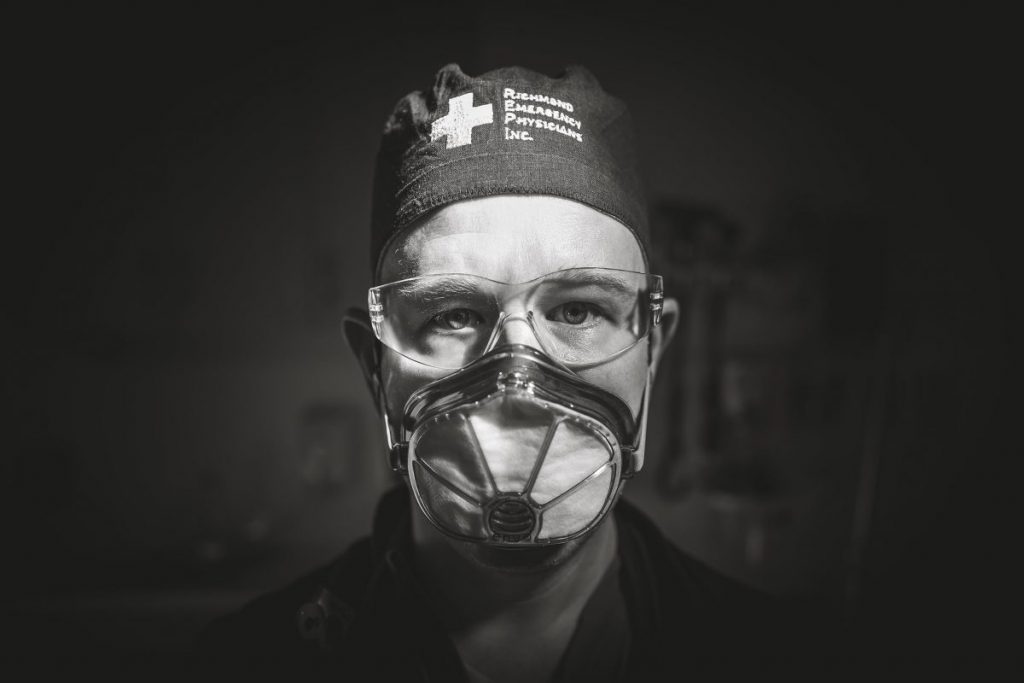 A day in the life of an ER physician: unlike most of us, photographer Chris Johnson knows what goes on behind the scenes in the emergency room. Lately, it’s been a bit… quiet.

Between the emergency room and his kids, ages 6 and 9, Chris Johnson doesn’t have a lot of free time. That’s what makes photography the perfect side hustle. As an Emergency Medicine Physician at St. Mary’s Hospital in Richmond, his shifts can last from 7am to 3pm, from 11pm to 7am, and even from 7am to 7pm. Usually, his spur-of-the-moment photography takes place outside of these hours, but when the pandemic hit, the hospital revealed itself to be a welcome, empty landscape.

“When all this started in March, we had a pretty big decline in overall patient volume that would come through the ER,” Johnson said. “I think a lot of that was because people were scared to come to the ER; they didn’t want to be around sick people. It was very interesting to walk around the hospital. It was just empty, and that’s not how it normally is.”

Johnson, who studied theater lighting design during his undergrad years, saw potential in the hospital’s gadgets.

“All of our rooms have an overhead light that you can move around, and it makes for some dramatic lighting,” he said. “I feel really silly about it, because I don’t think I’m a very vain person.”

Johnson is a nice guy. He has a round, gentle voice. He is humble — excessively so — and genuine. He believes in what is right, and is annoyed when people don’t do the right thing. His portraits have an ominous, almost medieval darkness that paints mask-wearers in a new light. They are to be taken seriously.

St. Mary’s is fully stocked with masks, but Johnson still hears about hospitals in the country that are facing shortages. “It’s July,” he said. “We’ve known about this since January, and it seems like someone — I don’t know who that someone is, whether that’s the federal government, state government, whoever — someone should have prioritized, ‘What are we going to do to make as many masks as possible?’”

He continued, “The fact that we are, A: short on testing, and B: [testing] is not even standardized… it makes it hard to contain this thing when you can’t even accurately detect it. But now in [Virginia], we’re in Phase Three, and as people have become more comfortable, they’re starting to go back out. People have started to come to the ER more now.”

Since the COVID-19 outbreak, Johnson and his colleagues have worked around the clock to stay on top of the most relevant data surrounding treatment, diagnosis, and protocols for how to adequately care for patients (and each other). Their meetings happen virtually now, which has also been an adjustment.

“I think initially there was a lot of anxiety, at least amongst the people that I work with, because people didn’t know what to expect. There’s so much unknown, because it’s not something that anyone’s ever dealt with before,” Johnson said. “Now we know more, and we are lucky to work in a health system that has adequate supplies and backs us up. Everyone works together as a team. The anxiety level is still there, but it’s less than it was when all this started up.”

The hospital staff featured in Johnson’s photos, smiling beneath their masks and protective equipment, don’t seem too frazzled. What’s more surprising is the sheer number of them.

“If you’ve ever spent any time in a hospital or an emergency department, you would realize that a lot of people have to be there to make everything work,” Johnson said. “A lot of those people were not necessarily being recognized, so that’s what prompted me to post the pictures originally.”

Johnson couldn’t photograph patients, of course, but he could photograph the people we rarely get to see: nurses and behind-the-scenes workers. He wants these people to be seen.

“I learned photography first, and having actually studied light was very helpful,” Johnson said. “Even though I didn’t study it in the context of photography, light is light. Lighting a scene is very important; in terms of the mood conveyed, or the overall feeling of the photo. You can’t necessarily alter that in nature, but you can use it to your advantage.”

The photos were spontaneous, prompted only by a quick “Can I take your picture?” The staff happily obliged, likely because Johnson, recently-elected president of his medicine group, knows most of them by name.

“In the ER, geographically, we are in the same space,” Johnson said. “We get to know each other really well. Certainly, we know the nurses we work with, the secretaries, the people who do environmental services, the people who register the patients — you’re around them all the time.”

In addition to his COVID-19 series, Johnson frequents the Lee Monument, Black Lives Matter protests, and the James River at every time of day, from sunrise to sunset. Now that it’s summer, he goes all the time. Johnson isn’t a morning guy, he says, but some scenes are worth it.

“Right now, sunrise is about 6 in the morning,” Johnson said. “If you’re going to get up to watch the colors — which is typically about a half hour before the sun comes up — you’ve got to be up at 4:45 or 5 in the morning. Once you get there, there’s usually no one out, especially on the river. I spend a lot of time on the river; it’s very relaxing, it’s very peaceful. I joked that that’s my quiet time, my time that no one’s going to bother me. It’s worth getting up early to do that.”

Johnson continued, “We’re so lucky to have the James River here. There’s people who don’t know that there are so many points you can access the river from, and the extensive trail system. I’m just showing people, ‘Look at this amazing resource we have! Don’t take it for granted.’”

Between the hustle and bustle of the ER, Johnson makes a point to find time for photography — and it’s not just for himself. He’s compelled to document everything from the James River to Richmond’s Black Lives Matter protests to ensure all have a chance to see them.

“There’s a lot of things happening that other people, for whatever reason, can’t witness themselves or can’t be part of,” Johnson said. “I think that’s part of it… to actually see what’s happening is very important, and pictures can be a powerful medium for that.”

Find more of Johnson’s photography during COVID-19 below, and galleries from Richmond and the James River at his website.