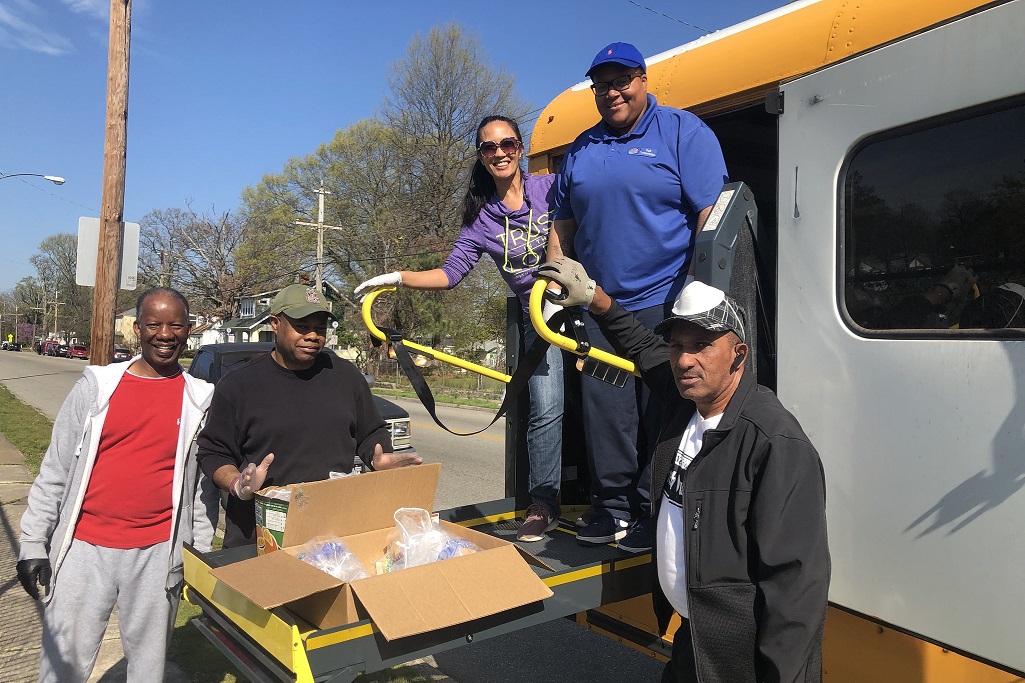 Schools, Nonprofits Hustle To Feed Over Half Million VA Students

“It gets me out of the house,” said McBride, who has been a school bus driver for 18 years, “and you know, you’re doing a great deed and helping people out.”

More than a week has passed since Gov. Ralph Northam announced students will not return to school this academic year, and volunteers are still working to feed the 590,000 children in Virginia eligible for free or reduced lunches who were ordered to remain home during the coronavirus pandemic. Schools have been closed since March 16, though students were originally slated to return by March 27.

Whitcomb Court resident Simone Sanders said her children are now eating at home during the day, but she didn’t receive an increase in food stamps. One child is disabled, which prevents Sanders from being able to work.

“It’s affecting us bad, especially in the projects, and there’s nothing for the kids to do all day,” Sanders said. “And then you have to worry about your child just being outside getting shot.”

The Richmond Public Schools meal distribution program, like others around the state, continues to evolve during the coronavirus pandemic that caused a surge of Virginians to file for unemployment. Almost 46,300 Virginians filed for unemployment between March 15 and March 21. The previous week 2,706 people filed an unemployment claim, according to the Virginia Employment Commission.

Erin Stanley, director of family engagement at Richmond Public Schools, said volunteers, bus drivers, and the district’s nutrition staff have made the efforts possible. Volunteers were using personal vehicles to drop off food, but RPS decided that school buses would better suit the cause.

“We did that for a couple of reasons,” Stanley said. “One, so we can get more food out, and two, because school buses are a bit more well known and probably more trusted than individual volunteers going in with their personal vehicles.”

Plastic bags filled with milk cartons, sandwiches, apples and snacks are handed out in neighborhoods found on the Richmond Public Schools’ website. School distribution sites are open Monday through Friday from 9:30 a.m. to 12:30 p.m., and neighborhood times vary by location. Any student in the school district can use the program, Stanley said.

Volunteer Natalie Newfield said many families she gave meals to lost jobs in the restaurant industry.

“They’re changing the way they do deliveries, which is amazing,” Newfield said. “Every day you give them a count. If they need more food, the next day, all of a sudden your bus has more food. It’s incredible.”

When schools closed, the U.S. Department of Agriculture activated the Summer Meals Program, which funds public schools and local organizations to serve breakfast and lunch during the summer.

Del. Danica Roem, D-Prince William, pressed the USDA to change its policy which required parents to have their child with them when picking up food.

Roem said it was difficult for a Prince William County mother to access food for her two children. Her daughter has an immune system deficiency caused by recent cancer treatments, making her susceptible to the COVID-19 virus.

“When you’re talking about a seven-year-old with cancer, we have to really evaluate what is it that our policy is trying to prevent that is more important than feeding a child with cancer,” Roem said.

Roem said she was able to bring groceries to the family, who live in the representative’s district. As they carried bags of food inside, Roem said the mother told her children, “We’re eating tonight.”

“I fought with the USDA for a full week and won a major, major victory for kids throughout Virginia and across the country, and especially immunocompromised kids, to make sure that they stay safe, that they stay home,” Roem said.

The USDA waived the restriction last week, and states can now choose to waive the in-person policy for students to receive food.

No Kid Hungry, a national campaign launched by nonprofit Share Our Strength, is offering emergency grants to local school divisions and organizations during the COVID-19 pandemic.

The grants can help people who are trying to make meal distribution possible, but may lack the equipment necessary to feed children outside of a school setting.

“Those might not be resources that folks already have, because those aren’t service models that were expected of them before,” Steely said, “so we’re here to support community organizations and school divisions as they figure out what it is they need to distribute to kids.”

The organization works with YMCAs, childcare centers, libraries, and all 133 of Virginia’s public school divisions.

The organization recently activated their texting hotline for those unsure of where their next meal is coming from: text “FOOD” to 877-877. The hotline is generally used during the summer months, but was reactivated to combat food insecurity during the coronavirus pandemic.

Steely called the hotline “a tool in a bigger toolbox of resources” and encouraged families to contact their local school board for updated information about their locality.

“They count on that as a primary source of nutrition, so with schools closed, we want to make sure that the students who are accessing meals at school are now accessing those meals at home,” Steely said.