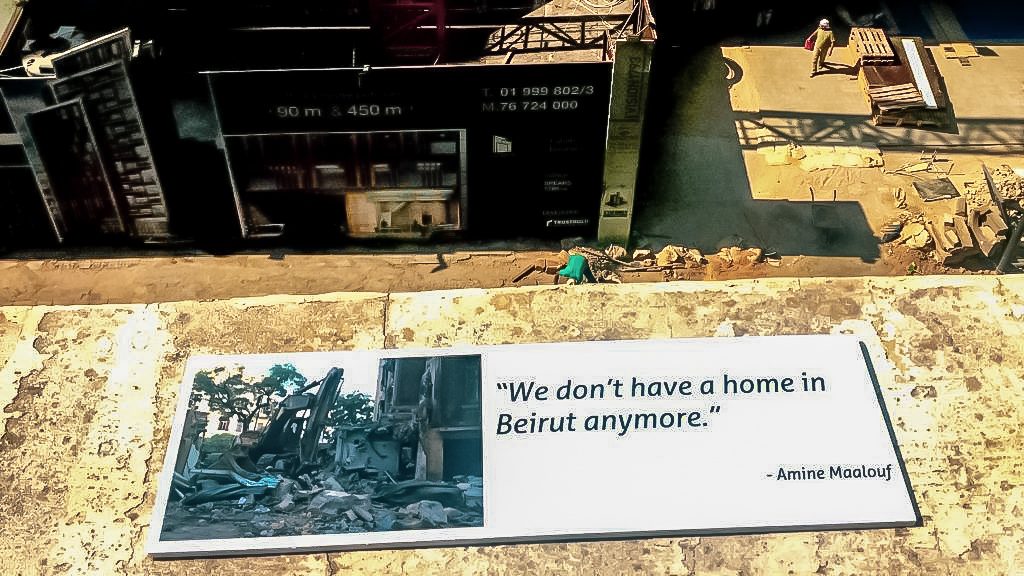 Like Richmond, Lebanon’s capital city Beirut is still grappling with the legacy of civil war. Unlike those in Richmond, though, many of Beirut’s current residents lived through the most recent civil war, which lasted from 1975 to 1990. The political structure that exacerbated the tensions of the war still exists. Lebanon’s 18 official sect affiliations organize political representation, access to government services, and much of social life, largely as they did before the war.

Debates about reconciliation and commemoration co-exist with immediate concerns about ongoing rebuilding and preservation efforts, contemporary politics, and even, for some families, with lingering questions about the disappearance of loved ones. As a result, the attempt to identify some sort of collective memory is fraught.

The International Center for Transitional Justice notes that, “The civil war is not documented in school history books, and young people are often actively discouraged from discussing it in school.” I heard this concern echoed by friends and fellow educators in Beirut and ascribed to the difficulty of politicians’ and community leaders’ coming to narrative consensus about the war.

Without a shared academic curriculum or national narrative commemorating the war, Beirut’s artists and designers play a key role in visualizing memory and linking their history with the present. My time in Lebanon last month coincided with the seventh annual Beirut Design Week.

The program, which ran from June 22 through 29, showcased the work of local artists, designers, writers, and activists. Begun in 2012, Beirut Design Week (BDW) now offers more than 150 exhibits, lectures, temporary public art pop ups and performances, and interactive community events, drawing at least 25,000 visitors per year, according to the organizers’ calculations.

The theme of this year’s BDW was “Design and the City.” It called for contributors and audience members alike to, “Consider design’s transformative role in conceiving of the urban space in such ways that express our needs, desires and dreams as inhabitants of the city.”

While BDW exhibits explored a range of topics, the war’s legacy echoed throughout artists’ work and even through the exhibition sites themselves. The exhibits I attended cautioned against both remaining beholden to and ignoring history. Instead, they looked for ways that design and public art could mediate between the past and present.

In their introduction to the exhibit, they argued that Beirut has been negatively impacted by “the boom of foreign gentrification” in which developers from outside Beirut rebuild without considering the city’s culture and history. The Beirut Souks, for example, once the site of local trade in fabrics, spices, and other goods, now more closely resemble Short Pump. The renovation was spearheaded by a private real estate company called Solidere, which came under fire for its connections to the Hariri family (Rafik Hariri was a former prime minister of Lebanon who was assassinated in 2005; his son Saad currently holds the same position) and its willful erasure of civil war history in Beirut’s downtown.

To challenge that kind of development, Architects for Change turned Zico House into a space visibly flooded by memory. Artists created an imagined former resident of the house, a young boy whose recollections of home—“the rubber tree roots that broke through our tiles and became part of our house,” for example—were written on walls and hung from trees.

As visitors wound their way up Zico’s steep stairwell, they were invited to describe their own feelings about Beirut’s past, present, and future in a single word on tiles which were then added to a rooftop mosaic (one respondent’s three answers: “Raw, tragic, fragile”). Once on the rooftop, signs marked the former locations of buildings that were since demolished by war or by rebuilding, as cranes and constructions workers labored across the street.

Before the war, Beit Beirut, another BDW site, functioned as the Barakat House does now. It was designed by Lebanese architect Youssef Afandi Aftimos in 1924. Because of the building’s position on the dividing line between East and West Beirut, it became a sniper post and saw heavy fighting.

Today, Beit Beirut’s façade is pockmarked with bullet holes and worn down by fire. The casual observer might assume that she’s looking at a condemned building. Inside, though, new metal supports bolster the structure, the paint is fresh, and renovators have installed a modern auditorium and office spaces.

On the ground floor of Beit Beirut, a permanent exhibit describes the former photography business, Photo Mario, that was located at this address before the war. Curator Mona El Hallak describes the project as essential to Beit Beirut’s efforts as a “Museum of Memory.” Negatives and images uncovered from the debris after the war hang from the walls. Additional boxes of photos encourage viewers to pick one and attempt to locate the person in the image, drawing the audience into the work of reconciliation.

In her work on Beit Beirut, it’s clear that El Hallak sees memory as not only the attempt to clarify and understand the past, but as a way to navigate Beirut as it is now, a city informed by a long history of art, culture, business, and, yes, violence. The BDW-specific exhibit at Beit Beirut this summer continued that effort. Inside a building marked by what El Hallak calls “war architecture,” urban design researchers mapped 2018 Beirut based on the perception of migrant delivery drivers, the diminishing presence of the Beirut River, and interactive surveys that, in Jimmy Elias’s “Multiple City” project, uses feedback from the audience to “translat[e] subjective emotions and experiences into narratives that contribute to a better comprehension of cities and one’s own life within the city.”

Richmond and Beirut are nowhere close to identical cities, and what works for Beirut as it continues working toward a future that engages a legacy of violence and deep divide will not necessarily be true for Richmond. But with the Monument Avenue Commission Report’s recent emphasis on partnering with the local arts community to envision new possibilities for commemoration in Richmond, Beirut Design Week is a useful reminder that the work of navigating the past and envisioning the future should be creative, intentional, collaborative, a bit messy, and always open to the public.

All photos by Katie Logan

*This article was made possible in part by support from the VCU Global Education Office.