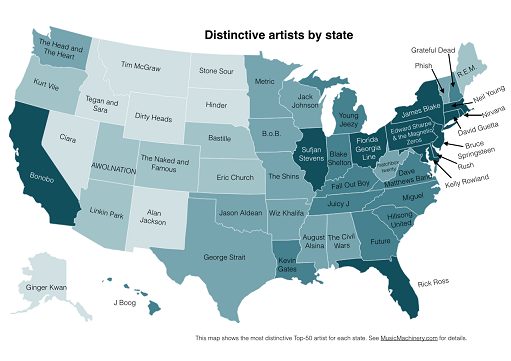 There’s been a lot of misinformation going around lately about the map you see above–“your state’s favorite band” was the way every clickbait website from Buzzfeed to Gawker to Slate to specialty sites that should know better described it. And they are all wrong, as anyone who took the time to read the original article from which the map is taken would know.

There’s been a lot of misinformation going around lately about the map you see above–“your state’s favorite band” was the way every clickbait website from Buzzfeed to Gawker to Slate to specialty sites that should know better described it. And they are all wrong, as anyone who took the time to read the original article from which the map is taken would know. Note at the top of the map where it says “Distinctive Artists By State”–that’s because this map actually gives artists who are noticeably more popular within the state to which they’re ascribed than they are in the other states of the union. Therefore, Bruce Springsteen isn’t necessarily New Jersey’s favorite band–it’s just that Jersey likes Bruce Springsteen a lot more than any other state likes Bruce Springsteen.

For this study, I sampled the listening preferences of about a quarter million listeners that have a zip code associated with their account. Listener data is drawn from a variety of music streaming services that are powered by The Echo Nest. I aggregated these listeners into regions (state, regional and all-US). To compare regions I look at the top-N most popular artists based upon listener plays in each region and look for artists that have a substantial change in rank between the two regions. These artists are the artists that define the taste for the region.

As an example let’s compare Tennessee to New England. If we look at the top 100 artists listened to in Tennessee and see which artists fall the furthest on the New England chart we find these 10 artists:

[super nerdy graph redacted–click through to see it]

Is this starting to make sense yet? We understand if it isn’t. Here’s the important part: Paul Lamere at Music Machinery built an app to track which artists are listened to more in one region than another. You can play with that app by clicking HERE. We ran a specific comparison of Virginia to the United States as a whole, and here’s what we got as the top 10 artists listened to more within Virginia than they are in the rest of the country.

And how about that? Dave Matthews Band isn’t even on the list! Instead, it seems VA is more stoked than the rest of the country about 90s R&B, alt-country, and uh, Kidz Bop. So why does the map above say Dave Matthews Band on it? Let’s go back to Lamere:

I built an app that makes it easy to explore the regional differences in music. With the app you can select two regions and it will show you which artists are distinctive for each region. Using this approach we can pick a single signature artist for each state. I do this by finding the top most distinctive popular artist for a state that hasn’t already been selected for a more populous state.

How did Lamere pick Dave Matthews Band as VA’s signature artist? As far as we can tell, it’s because DMB has both a pretty high ranking for how much they’re listened to by streaming music listeners in VA (#48), coupled with a pretty high variance between that rank and their rank in the United States as a whole (which is #113). But Dave Matthews Band is far from the most distinctive band in Virginia, and they’re also far from “Virginia’s Favorite Band.” Using that same app above, we ran the numbers for VA by itself, and here’s what we got for a top 10:

And look at that–it’s the same super-popular top 40 artists you’d probably get in every state in the country. That’s the truth, but it’s pretty boring, right? People would rather hear weird results like Awolnation in Utah, The Head And The Heart in Washington state (no dis to our sorta-hometown boys, of course), and Dave Matthews Band in Virginia. But those results don’t have too much to do with anything, other than a bunch of weird stats that are fun to play with but aren’t actually indicative of any broader trends. And now you have a boring article full of number-crunching to prove it. Share it on Facebook!