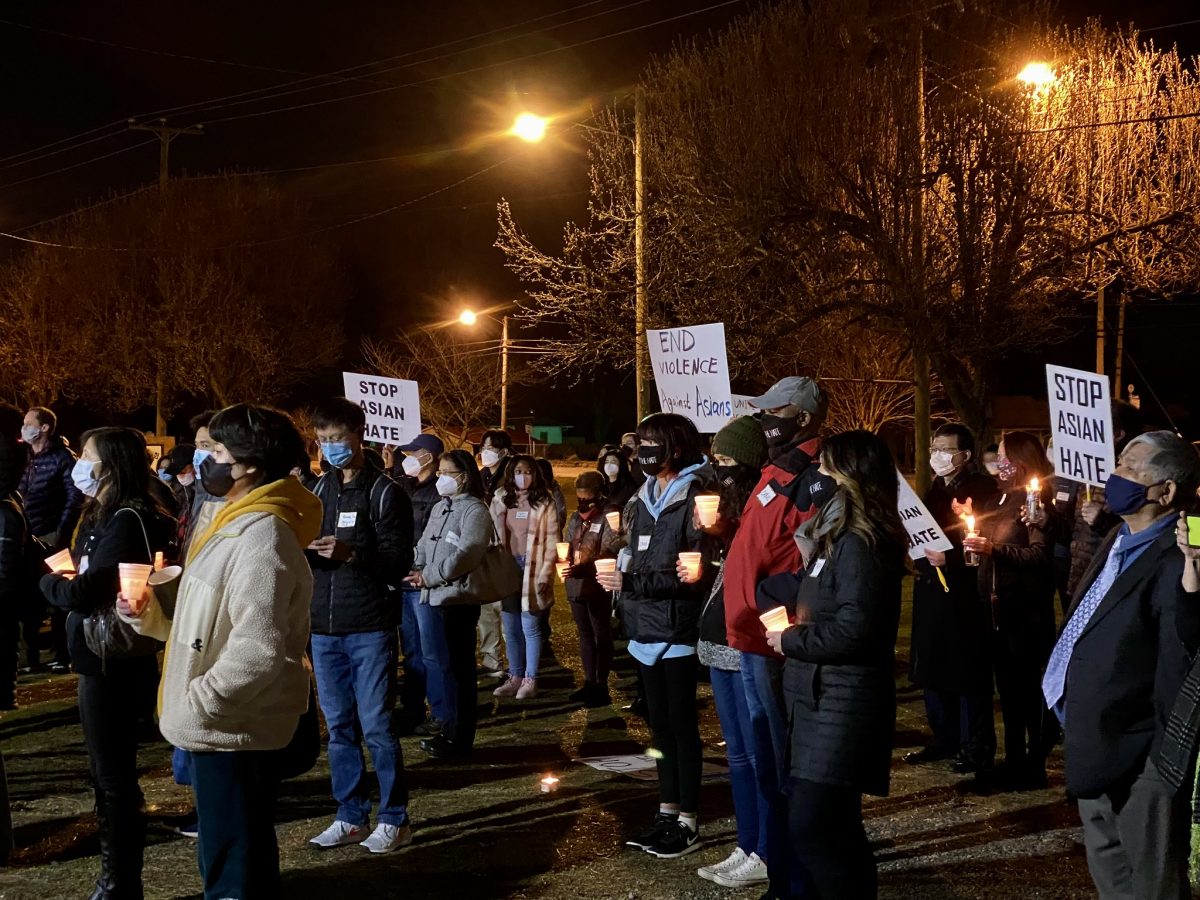 In the wake of the Atlanta shooting and other hate-fueled attacks against Asian Americans, Central Virginia’s Asian American community are coming together to stand up against violence and racist stereotypes.

More than 60 people gathered recently in Southside Richmond for the candlelight vigil to commemorate the Atlanta shooting victims and to call attention to recent anti-Asian violence.

“We did not want to be here, but we are here because of the hate,” said Mahmud Chowdhury, chairman of the Asian American Society of Central Virginia. “Because of madness in some people’s hearts and because of racism.”

The vigil was one of numerous events across Virginia this past March as communities, advocates and lawmakers came together in response to the murder of eight people in Atlanta. Six of the eight victims were Asian women. Police charged 21-year-old Robert Aaron Long, who is white, with eight counts of murder.

A “Stop the Hate” rally was held in Richmond’s West End three days after the vigil. Community leaders and dignitaries, such as Attorney General Mark Herring and State Sen. Jennifer McClellan, D-Richmond, spoke at the rally.

May Nivar, who is Asian American and chair of Gov. Ralph Northam’s Asian Advisory Board, said she attended the vigil to show support for her community.

“It’s important that we all stand together and stand not only together amongst our own community but also with other marginalized communities,” Nivar said.

Nivar also is a founding member and chair of the Asian & Latino Solidarity Alliance of Central Virginia and member of the Richmond chapter of Virginia Center for Inclusive Communities. She said fundamental local and federal legislative changes are needed to address anti-Asian discrimination.

“These vigils, they help bring the community together when we’re hurting,” Nivar said. “However, the real change has to come at the root cause. And that’s racism.”

Nivar said the Asian American and Pacific Islander community also needs to internally reflect on its part in addressing systemic racism and striving for substantial changes.

State legislators recently formed a caucus to advocate legislation for Asian American and Pacific Islanders in Virginia, which the founding members said was partly a response to recent anti-Asian hate crimes.

The caucus plans to work alongside the Virginia Legislative Black and Virginia Latino caucuses to push out legislation to “achieve our common goals of a more equitable future for Virginians.”

Tran was overcome with emotions as she reflected on the surge of violence against Asian Americans in the past months.

“It’s as if we have been so othered, that we’re at the point that we’re dehumanized,” Tran said, “and that you could be cruel against us. You can be a bully against us, because nobody’s going to stand up to help us.”

Days after Tran’s remarks, a Filipina American woman was brutally attacked in New York City during the day. No one intervened.

Tran’s family came to the United States as refugees from Vietnam. Her family dealt with discrimination and microaggressions when they moved to the U.S, she said.

“I’m thinking about my own experience and unpacking that,” Tran said. “That’s hard. It’s just a lot of trauma.”

The caucus members do not have a firm list of policy agendas, but they will have a virtual listening tour in April to gauge issues and concerns in the Asian American and Pacific Islander community. They will virtually meet with the public in Northern and Central Virginia and Hampton Roads.

Del. Suhas Subramanyam, D-Ashburn, said the caucus will incorporate the feedback into its policy agenda, which it plans to release in May, coinciding with Asian American Pacific Islander Heritage Month. The caucus will pursue specific legislation during the 2022 General Assembly session.

Del. Mark L. Keam, D-Fairfax, said he wants to improve language access at government services for Asian Americans and others who do not speak English. He said non-English speakers are not getting vital information about COVID-19 vaccine distribution or unemployment insurance claims due to the lack of language assistance.

While Atlanta law enforcement have not declared the killings a hate crime, many Asian Americans believe the shootings are another example of the spike in anti-Asian violence since the start of the COVID-19 pandemic.

Advocates and lawmakers have linked the hate crimes to rhetoric blaming the Asian community for COVID-19. Many attribute the origin to former President Donald Trump’s usage of the terms “Chinese virus” or “Kung flu” to describe COVID-19.

“The past administration in the White House frequently sought to demean and dehumanize,” the Asian American and Pacific Islander community and didn’t respond to growing attacks, said Sen. Ghazala Hashmi, D-Chesterfield.

Hashmi introduced a bill this legislative session to expand the definition of hate crimes to include attacks based on the perception of a person’s identity. The bill failed to advance.

Tran said anti-Asian hate crimes may go unreported because most people are afraid to come forward.

“They might not have the language abilities, the trust of law enforcement, and they just don’t know how to report,” Tran said.

Nearly 3,800 hate incidents nationwide were reported to the organization since the pandemic. Virginia was one of the top 18 states with the most reported incidents, joining Maryland and the District of Columbia.

The majority of individuals reported verbal harassment, followed by shunning and physical assault. Chinese is the largest ethnicity group to report hate, followed by Koreans, Vietnamese and Filipinos. Women reported more than twice as much anti-Asian discrimination than men, according to the report.

There is a long legacy of anti-Asian racism in the U.S. that is often intertwined with misogyny, experts said. One of the earliest acts of anti-Asian sentiment was the 1871 Chinese massacre in Los Angeles that killed 19 Chinese immigrants, said Sylvia Chong, associate professor of American studies at the University of Virginia.

The Page Act of 1875 denied Chinese women entry into the U.S. due to “lewd and immoral purposes” because “they were seen as a sort of a threat to immigration, but also, they were characterized as not being virtuous,” said Shilpa Davé, associate dean and assistant professor of media studies at UVA.

Anti-Asian discrimination seeped into laws, such as the Chinese Exclusion Act of 1882 that prohibited all immigration of Chinese laborers. It was the first federal law to bar a specific ethnic group from coming into the country.

Chong and Davé said the U.S. military presence and imperialism in Asia during the 20th century escalated the sexualization of Asian women. Chong said there was “persistent encouragement and use” of the local population to satisfy the military’s sexual needs.

“This introduces to American troops… the notion that Asian women in particular are in the position of sexual servitude,” Chong said. “So this follows people home.”

This narrative carried over and persisted in American popular culture, in numerous films and musicals, such as Miss Saigon, portraying Asian women as sex objects, Davé said. It created the stereotype of Asian women being “sexually promiscuous or self-sacrificing” which became ingrained in American society.

The Atlanta shootings and recent violence underscore the intersectionality of gender, class and immigration status in anti-Asian racism, Chong said. While there is no indication the Atlanta shooting victims engaged in sex work, she said, Asian massage parlor workers are vulnerable to sexual exploitation. Low-wage laborers, such as massage spa workers, are often exploited and demonized, she said. There is also a narrative that they need to be “saved from their lives,” which is harmful, according to Chong.

“They need to be given the protection to live their lives as others do,” Chong said. “Free from coercion, law enforcement coercion, as well as the random violence, societal violence. This is what any person in society wants.”