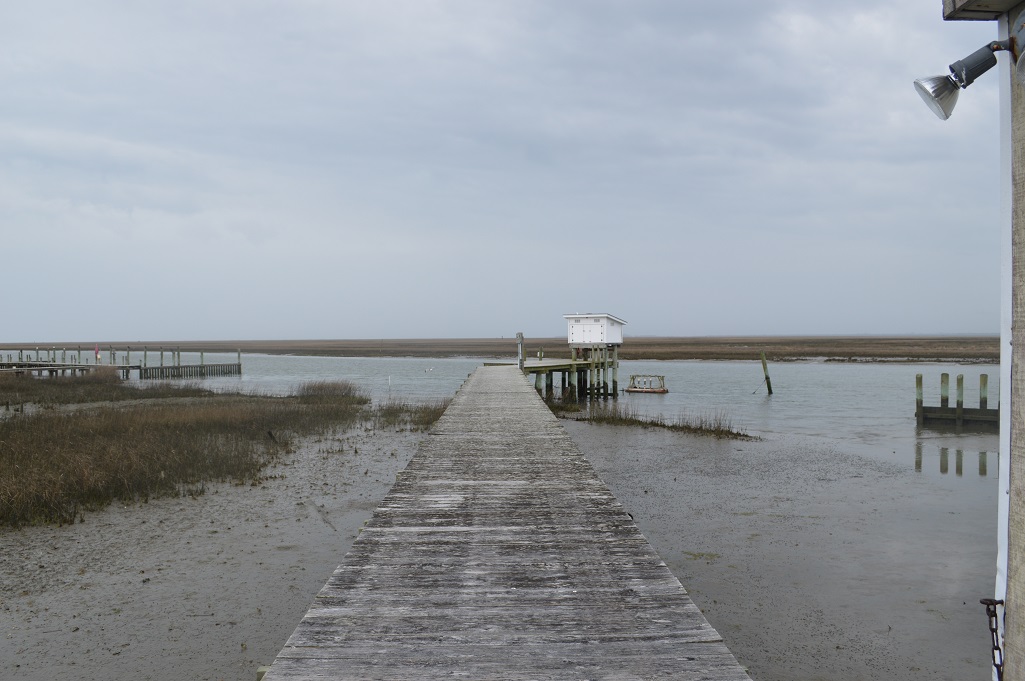 In the Eastern Shore town of Wachapreague, climate change threatens a coastal way of life.

The tide is high, but this seaside town is holding on.

As the owner and operator of Seaside Eco-tours, Capt. Meriwether Payne ferries passengers from the Wachapreague Town Marina to the barrier islands just beyond the marshes of the shoreline village. The nature surrounding Virginia’s Eastern Shore is the heart of her business, but the rising sea level and the resulting increase in coastal flooding are threatening Payne’s excursions.

“There seems to be more and more days when we have to walk through water to get to the dock or have to move to a dock other than the town marina to pick up customers,” Payne said.

The Nature Conservancy of Virginia hosted a community event in March to discuss the impacts of sea-level rise in Accomack County, which encompasses the northern half of Virginia’s Eastern Shore and the approximately 200 residents of Wachapreague. At the meeting, Payne said it’s difficult getting customers to her boat during high tide.

Residents heard from the Accomack-Northampton Planning District Commission and staff from the Nature Conservancy, who spoke about planning for and responding to climate change. However, some on the Eastern Shore are skeptical about the severity of the issue.

“You will find that there are a large percentage of people on the shore that do not think anything is going to affect them in their lifetime — particularly older folks,” Payne said.

The effects of these environmental hazards are apparent more than ever on Tangier Island, which sits in the Chesapeake Bay. It has lost 67 percent of its landmass since 1850, with much of the remaining landmass expected to be underwater within the next 50 years, forcing residents to abandon their homes.

Cedar Island, in the Atlantic Ocean just off the coast of Wachapreague, is one of many barrier islands guarding the coasts of Virginia. It is a frequent destination on Payne’s tours.

For decades, the island housed dozens of residents who built homes on the land. But like Tangier, the sea slowly claimed the beaches and surrounding marshland. Some homes were lost as well. Other homeowners took it upon themselves to uproot their houses and move them inland where they would be safe. The last house was removed from the island in 2015.

Also residing in Wachapreague is the Eastern Shore Laboratory of the Virginia Institute of Marine Science. The lab acts as a station for teaching as well as a site for research. While it exists primarily to study coastal ecology and marine life, the scientists there are well aware of the changes going on around them.

Richard Snyder, the lab’s director and an Eastern Shore resident, said the rise in sea level is nothing new for coastal areas of Virginia.

“Sea level has never been static. It’s always been going up and down,” Snyder said. “Now, it’s just a matter of how well we adapt to it.”

The institute is changing in response to the rise in sea level, much like the residents of Cedar Island. They’re in the beginning stages of a building campaign that would move a number of administrative and research buildings inland to an area known as the “Wachapreague Highlands” because it is slightly more elevated than the surrounding area. Other buildings will be lifted and placed on stilts so they can withstand flooding that threatens their foundations.

In 2012, VIMS completed the new Seawater Laboratory in Wachapreague. With an eye toward the future, the lab was built to withstand a 13-foot storm surge. Snyder said it’s the safest building in hundreds of miles during a flood.

Snyder acknowledged that building and development in areas that are likely to be affected by flooding and sea-level rise are still occurring at an alarming rate. While some people are preparing for the worst, others are not as mindful.

“We need to be planning, and we need to be addressing these issues,” Snyder said. “But there are people going the exact opposite direction — still promoting building and investment in infrastructure in areas that in 50 years may not be viable.”

Everyone has a stake in the issue — even if they don’t own property on the coast.

“Now we have backed and invested in development in areas that flood by providing federal flood insurance,” Snyder said. “And we all now are on the hook for billions of dollars of infrastructure that’s at risk because the government has supported it and allowed loans and development in areas where honestly, we probably should never have built.”

Besides VIMS, other researchers are tracking environmental changes. They include a federal project called the U.S. Global Change Research Program.

The program recently issued its Climate Science Special Report. The study shows that globally, sea level has risen roughly 7-8 inches since 1900, with about 3 inches occurring since 1993. The report projects that sea level will rise an additional 4 to 8 inches by 2030.

Recent projections from the VIMS Center for Coastal Resources Management approximate a possible “extreme” sea-level rise on the Eastern Shore between 4.5 and 7 feet by the year 2100. That is three to four times the expected global average.

Of the roughly 15,000 homes in Accomack County, officials estimate that more than 7,700 are less than 5 feet above sea level and are therefore at a greater risk of flooding. Nearly $900 million worth of property — including churches, schools and medical facilities — are also in the range of the estimated extreme sea-level rise, according to an analysis by Climate Central, a nonprofit research group funded by private foundations.

In April, Gov. Ralph Northam announced $1.5 million in funding for six winners of the first RISE Coastal Community Resilience Challenge. The winners will use the money to develop innovative products, services and workforce development programs designed to aid communities in adapting to climate change.

“The commonwealth is well-positioned to create and implement innovative adaptive concepts that will ensure the viability and economic vitality of coastal areas for future generations,” Northam said.

Citizens like Snyder and Payne remain optimistic in the face of not only rising waters but also skepticism many Americans have voiced about climate change.

“I think you’ve got a lot of people that don’t believe it,” Payne said. “Fortunately, my boat floats on top of whatever the sea level rises to.”