[WARNING: I will be using the term “R-Words” throughout this article because I have no idea what’s right anymore]

“Just a cup of coffee, please,” Robert Griffin III told the waitress behind the bar. He eased his broken body onto the bar stool at the Washington D.C. breakfast diner, but he wasn’t hungry.
END_OF_DOCUMENT_TOKEN_TO_BE_REPLACED

Last weekend, former and current professional athletes ranging from NFL, NBA, MLB, and US World Cup Soccer stars stood by their works of art inside of 1708 Gallery, addressing their pieces in the first exhibit of its kind for Richmond.

No helmets to sign, no signatures carved across spiraled canvas. At this exhibit, sweeping changes are in play; stigma the only opposition. Though many questions far and wide were answered that night, one question remains unattended, stagnant in the air: can one be more than an athlete? 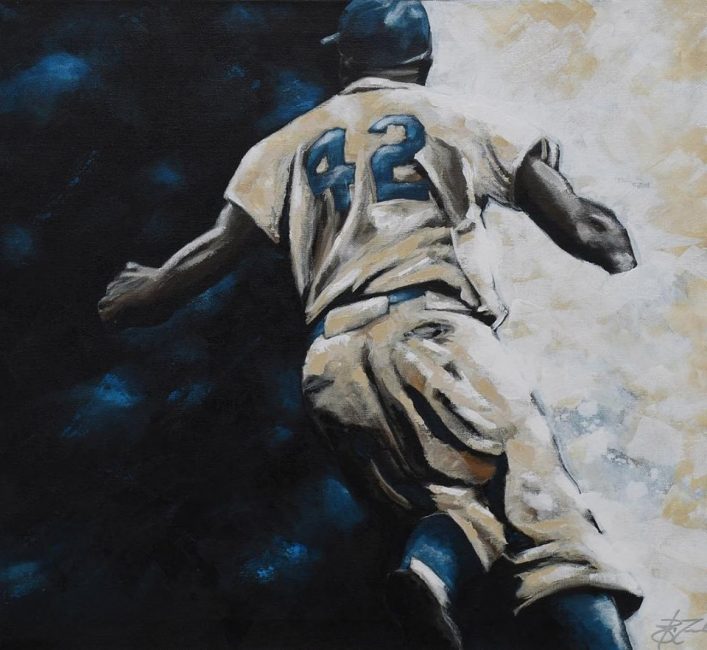 Washington Redskins tight end Vernon Davis, Larry Sanders of the NBA’s Cleveland Cavaliers, U.S. soccer legend Jay DeMerit, and former MLB pitcher Brett Tomko to name a few were all involved in the weekend’s events. Most of these athletes also gave speeches at a symposium held at Washington Redskins Training Center early Friday afternoon, addressing the problems many athletes face outside of the limelight, as well as the stigma attached to sports in its polarizing distinction from art.

“The main thing we are trying to promote here tonight is that we are more than just athletes, the sports world is not as separate as many, I feel, believe it to be,” Davis said.

The exhibit is the brainchild of Ron Johnson and Chris Clemmer who have working on the exhibit for the last years. Clemmer is a toy designer and co-founder of Sprig toys and Beginagain Toys and Johnson is an Assistant Professor in the Painting and Printmaking Department at VCU.

“We want to break down this barrier of stereotypes where athletes sit on this side and artists sit on this side,” Johnson said. It amazing to hear stories from current athletes in a vulnerable state, something we’re not used to, and talk about these experiences- I mean it humanizes them.”

The Vernon Davis Foundation, Glenn/Gwinn Foundation, and the Mission 22 Foundation encompassed the bulk of the donation list that would benefit from the purchase of the athletes’ works. VCU scholarships were also available upon purchase of some works, hoping to encourage further research into brain injury rehabilitation, a topic Johnson and Clemmer said still haunts the fields of organized sports today.

Johnson said he plans to showcase the exhibit in other locations in the future.

“This was practically the launch, we have several spots in the hopper, Ohio State, Tallahassee, University of Georgia, it’s wild how many athletes are reaching out with ideas for exhibition sites,” he said.

Two terms Washington football pundits loved to throw around before the R-Words’ loss to the Falcons on Sunday were “competitive” and “winning formula.”

END_OF_DOCUMENT_TOKEN_TO_BE_REPLACED

A new policy signed into law by California Governor Jerry Brown (D) has banned the use of the term “redskins” and the logo associated with the term from being used by public schools in the state.

END_OF_DOCUMENT_TOKEN_TO_BE_REPLACED

[WARNING: I will be using the term “R-Words” throughout this article because I have no idea what’s right anymore]

END_OF_DOCUMENT_TOKEN_TO_BE_REPLACED

Humans tend to suppress difficult times in their memory. Places, people, and things connected to these dark times, when encountered, tend to precipitate flashes in our brains, bolstering the suspicion that, yes, I was surgically engineered in a lab as a military weapon where they wiped my prior memory. No, it turns out, I just ate at that Arby’s with my ex-girlfriend once. How long did we date? That many years? And so on. That Arby’s is quite similar to names like Albert Haynesworth, Jason Taylor, Adam Archuleta, and very possibly soon: RGIII.
END_OF_DOCUMENT_TOKEN_TO_BE_REPLACED