Get Lost In Williamsburg with Phillip Merritt - RVA Mag 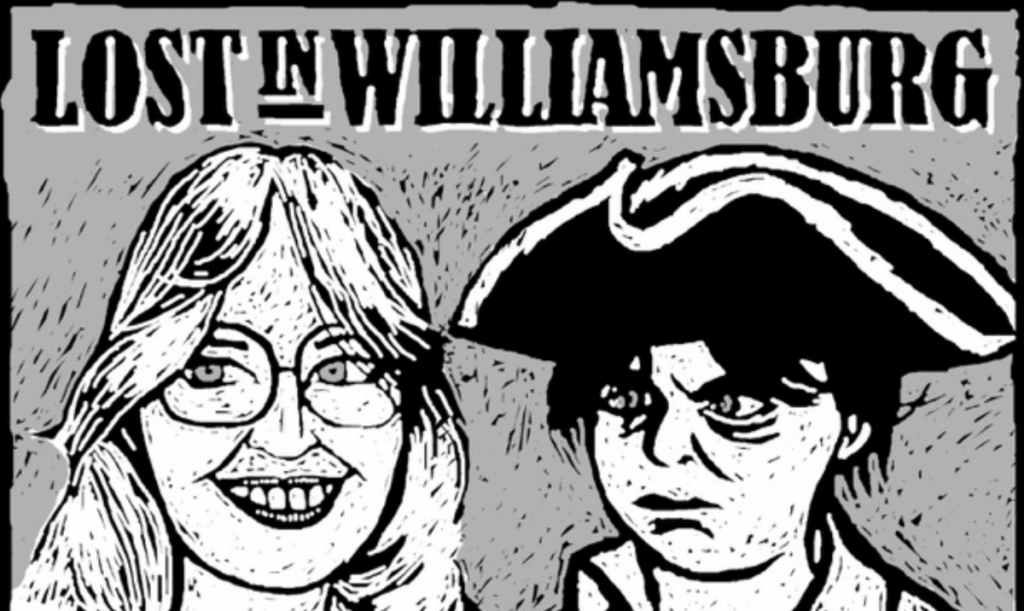 The Lost In Williamsburg podcast tells listeners a supernatural story of the city, shifting from the 18th century to present-day through strange and unexplained happenings.

Phillip Merritt has “No [email protected]%s Left to Give” when it comes to art.

Phillip Merritt is an architectural landscaper by day, and a multi-dimensional artist by night. Merritt is widely known for his award-winning podcast Lost in Williamsburg and his tongue-in-cheek music videos on Vimeo — all of which he writes, plays and slays all by himself under the name 1000 Years From Now. His latest work, a music video titled “No F#@%s Left to Give,” is quite the ode to finding one’s artistic voice, and the freedom to express it no matter what age you are.

While it was always a dream for Merritt to play music, it never came as naturally to him as the visual side of art. “I don’t really play an instrument, although I do have a guitar that I strum along with. When I put together videos, I can strum a few bars and stitch them together,” he said. “I don’t really have much time to practice, especially if I’m writing, so that takes up most of my free time. I use Logic Pro and GarageBand to put together keyboards and other sounds.”

The inclination to create has always existed within Merritt. He got his start as a visual artist, and he’s always had an affinity for sound. The same cannot be said for writing,  even if it’s the majority of what he does artistically in his projects.

“I always hated writing in school when I was younger,” Merritt said. “But now I don’t have to please anyone with it. I can do it however I want; it’s a bit more freeing.”

Merritt was born in Iowa, then lived in Texas through his formative years before graduating from the University of North Texas. Armed with an undergraduate degree in Drawing and Painting and a graduate degree in Landscape Architecture, he moved to Williamsburg in 1993 at 25 years old to be closer to his partner of (now) 30 years.

“I always thought Williamsburg was a really fascinating place,” Merritt recalled. “It’s interesting; as a kid, my mom, aunt, and grandmother all loved visiting there. It was so beautiful. There are all of these incredible arrangements of spaces behind all the buildings and paths — it’s a very inspiring place to wander through. The whole thing is kind of ‘work of art meets a museum.’”

Merritt works to shed light on the city’s different layers on his Lost in Williamsburg podcast. Most people think of the town only as a tourist attraction, and it’s easy to forget just how old Williamsburg is. “They did a fantastic job rebuilding these buildings,” Merritt said. “It’s a world-class display of architecture, and I don’t think many people realize that. It’s also a huge step in historic preservation.”

The beautiful scenery is undoubtedly an inspiration behind the podcast. It’s clear that Merritt is a landscape architect; that career choice, however, was also the driving factor in his search for an artistic outlet. It eventually led him to envelope his creative hankerings into a large, 20-episode script.

“You hear a lot about people following their dreams, and I decided, ‘Why not give it a shot?’ I want to encourage people to try new things. I wasn’t necessarily a writer or a musician, but I just tried it and put it out there. I didn’t really edit myself, so a lot of the stuff I first put out was kind of rough, and not as high-quality. But people shouldn’t care about making ‘bad’ art — it’s more about the attempt to make art. Just getting it out there… do it long enough, you’ll start to improve.”

Merritt received interest from actors sparked by fliers he put up, but with many roles to fill, he ultimately reached out to friends who didn’t come from acting backgrounds.

“It was awesome to see someone [working] with no experience in acting, who would never get up in front of a real audience,” he said. “Some people gave really terrific performances as complete amateurs. When there’s no camera or audience, it really allows people to feel a bit more free in regards to acting. Not being scared to say yes to something. Together, you can make something really fun and interesting.”

The dramatic podcast is everything you wouldn’t expect it to be, but in the best way possible. At first, you think you’re about to hear a scary story, but what it turns into transcends any one genre. It’s like The Twilight Zone meets Dawson’s Creek — but slightly gay, ghostly, and full of murder.

The details that set Merritt’s work apart from that of other artists are his refreshingly brazen words, expressed through the dialogue he writes throughout all of his projects. LGBTQ subtleties are common, but he doesn’t fixate on these moments — he lets them lay naturally into the characters’ interactions, as they do in real life. These matter-of-fact relationship moments help normalize LGBTQ relationships in mainstream media, just as they continue to integrate into the fabric of our society.

The storyline flips between colonial times and the present-day happenings of Williamsburg, intertwining musical breaks that Merritt splices throughout the narrative strategically. His music becomes pieces of the story arch on its own.

The plot begins by following Thomas Jefferson and Professor Jobriath on a witch hunt, along with a William and Mary student, Aaron, who inadvertently falls victim to the antagonist. Enter Hebexa: a character who haunts them across dimensions, casting curses on other characters that, when they aren’t malicious, are quite entertaining. One example is the love spell she casts in one episode, falling on Thomas Jefferson and a plantation owner’s son. The millennium-teetering storyline is stitched together sonically, much like the foundation of a musical theatre play. Merritt also weaves in a podcast within the podcast, “Cacophony,” a radio show which kicks off Episode Two. Aaron’s character is interviewed on the fictional show about the latest up-and-coming news regarding his band.

You don’t need to be from Williamsburg to appreciate this podcast. The city is fairly well-known outside the area, and a fun aspect of the show for Merritt was working with locals and their Tidewater accents.

“I got a kick out of sending that out, and having people all over the world hear what makes our area distinct,” he said. However, the themes within Lost in Williamsburg are what make it universally accessible.

To learn more about Merritt’s work, check out Lost In Williamsburg on Apple Podcasts and Soundcloud and hear an episode for yourself. His work in music videos and animation can also be found on Vimeo, at his 1000 Years From Now channel.