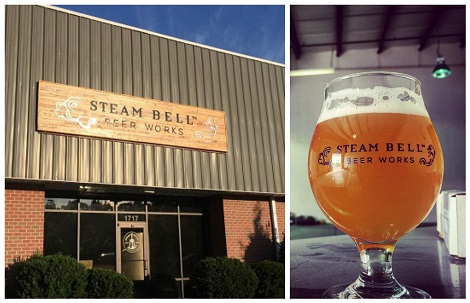 Steam Bell Beer Works, the first stand alone brewery in Chesterfield, hopes to be serving up cold ones before year’s end.

Steam Bell Beer Works, the first stand alone brewery in Chesterfield, hopes to be serving up cold ones before year’s end.

Brad Cooper, (no relation to the movie star-I checked), is the man behind the brewery located off Genito Road, who plans to brew up saisons and sours for your drinking pleasure.

“This has been my dream since I brewed my first batch of homebrewed beer when I was 21 on my parents’ stove,” Cooper said.

Now 29, that dream has become a reality for the former miner.

Cooper, an avid cave and hiking enthusiast, was on an expedition in the mountains of Virginia with some members of a local homebrewers club and one of them brought some home-brewed beer along, giving Cooper his first taste of his future.

“I thought it sounded like a fun hobby,” he said.

Little did he know that hobby would become a passion, which in turn, grew into a startup business.

After the expedition, Cooper went to the homebrew store and bought his first starter kit. He spent time concocting his own recipes and right before Hardywood opened, owners Eric McKay and Patrick Murtaugh sought him out at a homebrew club meeting to help get them up and running.

“I put my name down on a list and few days later got a phone call and they said, ‘hey could you come down and help on the bottling line?’”

Cooper volunteered at Hardywood for six months and worked for them for about a year before ultimately having to leave his dream behind for a promotion at Martin Marietta three years ago.

But his dream for Steam Bell was still brewing.

“The people are amazing and it’s all about having fun,” Cooper said. “I really never forgot about wanting to get back to get into the beer industry.”

One day last summer, after a bad day at work, it took a co-worker mentioning they only had “40 years left of doing this” when he knew he had to get out.

“That was the turning point where I was like, ‘no’,” he said. “I didn’t want another year.”

It was sort of a blessing in disguise that he was no longer happy there, because in September 2014 he was fired from Martin Marietta. Cooper began approaching investors to launch his brewery in March.

He hit his minimum goal of $125,000 for the brewery in May with the help of a couple of investors and signed a lease on a 6,000-square-foot space right behind Southside Speedway off Genito Road in Midlothian to launch his dream of Steam Bell Beer Works.

Steam Bell actually has a connection with the brewer’s last name. A steam bell is a machine “coopers,” or barrel makers, used to heat up wooden staves of a beer barrel to bend them together into the curved cask shape. Check out the video below of the process.

Cooper will be brewing on a 10 barrel system with one barrel amounting to 31 gallons.

Steam Bell will have two flagship beers to start off: the “Grisette” and a Golden Sour. The Grisette is a spicy, peppery session beer who’s name is a nod to his previous job in the mining industry.

“There used to be these women that would stand outside the mines and as the men would get off work they would hand them trays of beer, they called the women grisettes,” Cooper said. “It was sort of my attempt to revive this tradition.”

The Golden Sour is tart, dry and crisp and made with Ashland’s stone ground grits and a Belgian Pilsner malt.

“I started thinking about all the big brewers that use rice some use corn and I thought it would be an interesting spin to use grits, which is a southern staple, to put into this beer to provide some other sugars,” Cooper said. “I don’t think anybody in the area has a flagship sour beer.”

Cooper is also in talks with the owner of Buskey Cider, a cidery coming soon to Scott’s Addition to concoct a seasonal brew that’s half beer and half cider.

Although Cooper doesn’t plan to open until the end of the year, Steam Bell will premiere its beer to the public next Saturday at the Hops in the Park Festival in Henricus Park.

Cooper said when the organizers announced the festival, David Goode, manager of Swift Creek Berry Farm and co-owner of Piedmont Hops Farm, had planted some hops and Goode called him up to see if he wanted to use them for a beer.

The two collaborated to mimic a beer that might have brewed during the 1600s. They’re calling it “1611”, which is the year Henricus was founded.

“We consulted a historian who said the beers at the time had a lot of wheat in them and a lot of molasses,” Cooper said. “We got the malts from Copper Fox Distillery up in Sperryville, all the hops were grown at Piedmont Hop Farm, all the yeast is from RVA Yeast Labs, it was a strain that they cultured off of a blueberry bush from Piedmont Hop Farm.”

Putting a brewery anywhere outside the city is an ambitious move. There’s Lickinghole Creek in Goochland and Center of the Universe in Ashland, but with the exception of Extra Billy’s in Midlothian, which has a brewery attached, all of the breweries have gravitated toward the city.

But Cooper, a Chesterfield native himself, isn’t worried about putting his location outside of the ever-growing brewery market downtown.

“The styles I’m looking at offering, there’s kind of a hole with the farmhouse ales, the sour beers, there’s not much that’s available in Central Virginia,” he said. “Pretty much everybody around here is interested because this the first production brewery in Chesterfield.”

According to Cooper, even county officials are pushing to get more breweries out there such as Ben Humphrey, project manager for Chesterfield County Economic Development.

“He’s a huge craft beer fan, he’s worked really hard to get the zoning ordinances changed over the past couple years to allow a brewer,” he said. “Previously, a brewery in Chesterfield could only be in accordance with a restaurant like Extra Billy’s.”

Cooper plans to start brewing beer for Steam Bell Beer Works, located at 1713 Oak Lake Blvd., before the end of the year, with the tasting room followed by distribution to local restaurants in the coming months.