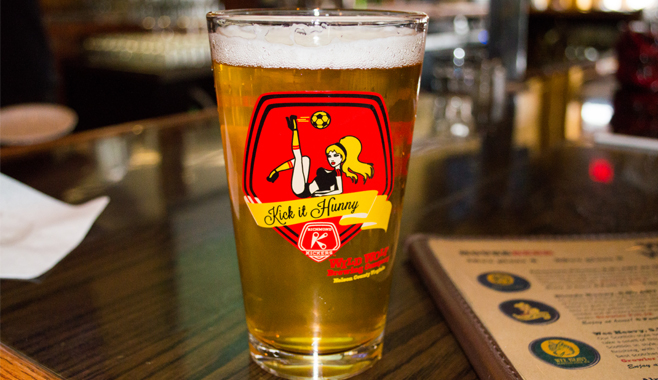 On Wednesday, RVA Mag had the pleasure of traveling up to Nelson County brewpub Wild Wolf Brewing with the Richmon

On Wednesday, RVA Mag had the pleasure of traveling up to Nelson County brewpub Wild Wolf Brewing with the Richmond Kickers and help out their annual collaboration brew with the Kickers, Kick It Hunny.

It’s a Belgian-American Session Pale Ale that’s the official beer of the Kickers and we got an inside look at how it’s made, along with the inner workings of Wild Wolf, their canning process and even had the chance to try a little beer (along with some great food) too!

The Richmond Kickers and Wild Wolf Brewing first launched Kick It Hunny, derived from their flagship beer Blonde Hunny, in 2014 and every year they travel up to the Nelson County brewery to brew it up. Loveland Distributing was able to secure that deal.

You can grab yourself a Kick It Hunny at any Richmond Kickers’ home game, as well as local restaurants including Fat Dragon.

Their brewing room may be small, but it’s a mini factory in there with head brewer Danny Wolf and other employees running around making sure everything runs smoothly.

Wild Wolf brews on a 20 barrel system, but they also can beer. They bought their own canning line at the beginning of the summer and we got to witness the magic being made.

The brewery cans about two to three times a week and yesterday was canning their most popular beer, Blonde Hunny.

“In a month were putting out around 30 to 40 palates of cans,” Wolf said. “For our size brewery its huge.”

According to Wolf, they’ve doubled production every year and last year produced about 4,000 barrels and this year they’re going to break 5,000 barrels. The brewery is now bursting at the seams and looking to expand from their current space.

Wolf said he has 10 acres on their property on Rockfish Valley Highway in Nellysford, Va. and within the next year the brewery is planning to build another facility for storage.

In addition to touring the facility and new event space, we got to help brew up Kick It Hunny”. Wolf said the recipe for the 5% Belgian Pale Ale doesn’t actually have any honey or spice, but its similar to their most popular beer.

Yours truly and RVA Mag president John Reinhold adding some hops to the brew!

“When I sat down with them (Richmond Kickers) several years ago we decided they liked something like the Blonde Hunny, but they also wanted something hoppy,” he said. “It’s a lower alcohol version of the Blonde Hunny, we added the Citra Hops. Its got oats, its got malted wheat and pilsner malt.”

Wolf added that the brewery adds about 22 pounds of Citra hops at the end of the process to make sure all the “flavors are locked in”.

Not only did we get to hear about their brew process, but we also got to try a little of the fruits of their labor.

RVA Mag got to enjoy their delicious (and huge) flight that ranged from light ales, to deeper ambers, all the way to brown ales and dark stouts. The flight included their house beers: American Pilsner, Blonde Hunny, Wee Heavy, Alpha Ale, Dry Stout, and Primal Instinct which were their house beers.

We also had the privilege of tasting some of their seasonal beers including Two Paws, Howling Pumpkin, Vienna Lager, Dubbel, and Nutty Wolf. (One of my favorites) You can check out where to get Wild Wolf’s beers in Richmond here.

The Richmond Kickers’ Kick It Hunny brew will be available within a few weeks so be on the lookout for the tasty brew! The Richmond Kickers first game starts Sat. March 26 where they take the Harrisburg City Islanders at City Stadium.