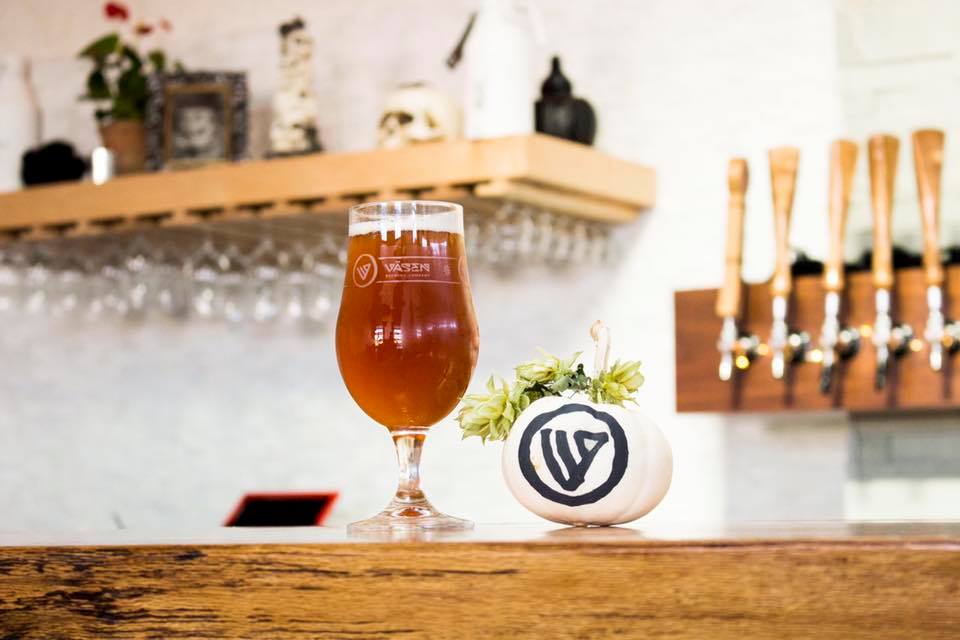 There weren’t any local breweries pouring an IPA-free menu when Väsen Brewing Company opened with its mix of farmhouse ales, sours, and Flemish reds. The Scandinavian-inspired brewery is a novel development in Scott’s Addition’s burgeoning beer scene. RVA Mag President John Reinhold sat down with the founders, cousins Tony Giordano and Joey Darragh, to learn how they got their start, what they do differently, and what they plan for the future.

What gave you the idea to start a brewery?

Tony Giordano: This whole thing started eight years ago, on a day with our grandfather, drinking some Oskar Blues from a can. We were like, “Dude, we could totally open a brewery.” It took us this long to get it up and rolling and learn everything we actually needed to know.

You grew up together in Northern Virginia, but then you went out to Boulder to get your feet wet with big beer production, right?

TG: Yeah, [Boulder Beer is] still a craft brewery because it’s under a certain number of barrels, but I was out there to cover all the bases, learn the machinery, bottling lines, canning, keg lines.

What did you two do before this?

TG: I was a U.S. Army Ranger from 2003 to 2007. I got out, got accepted to University of Colorado for a degree in environmental science. I went out there and just fell in love with the craft scene; it was booming. I got to meet a whole lot of people from the industry, and started working on a bottling line for like, $9 an hour.

What about you, Joey? What’s your background?

JD: Around the same time he moved to Colorado I moved to California to go to grad school at Stanford for mechanical engineering. After I graduated, I got a job at Tesla.

JD: Well, I was there for six years. At the time I started they had just started developing the Model S, and that was my main project. Lots of testing and tool development.

When I started, the company was about 500 people. When I left, it was over 15,000. It had transformed a lot while I was there and my interest is in smaller companies, startups. To wear a lot of hats and just do a lot of experiments, make mistakes, learn along the way.

Why did you come to Richmond?

TG: We decided it would be best to head home; we have all our family here. And Virginia hadn’t been represented by a strong sour or farmhouse presence yet. Northern Virginia is great, but we wanted somewhere that was a little laid back.

My brother was at VCU at the time. He was like, “Come check out Richmond.” [We looked here and] Charlottesville, and we were like, we want to be in Richmond.

It’s a great beer scene, but people outside the industry sometimes think there’s almost too much. Is that a real concern?

JD: No, not coming from Boulder, Denver, and the San Francisco Bay. Even though Richmond is kind of unique, a smaller city, and actual density of breweries per capita is high, the overall numbers are still relatively low given that there’s a lot of tourism here and surrounding counties outside of Richmond.

TG: We’re still not even relatively close to other metropolitan areas.

What brought you to Scott’s Addition?

JD: It was in our top three neighborhoods, but it was this building. We had very specific needs, like tall ceilings for these tanks. They had to be at least 20 feet tall.

TG: Because this building is so large, it had sat on the market for two and a half years. It was just such a huge space. We were the first ones to rent here. We walked in and I just saw this long, beautiful hallway, with all this natural light.

What were your biggest challenges?

JD: Fundraising and legal red tape. We had a seed to start with, but when it came time to put our money where our mouth is and start buying equipment, we had to look into loans. It was a slog.

TG: Beer-wise, it was trying to get people in Richmond, a really IPA-heavy town, to come to our place, where we had no IPAs on the menu. We’re trying to change people’s palates. Strangeways had sours, but we do our sours in a different manner. The response we’ve seen so far has been super positive.

TG: A lot harder. It takes five weeks. For an IPA, we do three or two weeks.

JD: Our beers are more dependent on yeast and bacteria, which is a lot harder to control. They are living creatures, you have to understand how to keep them happy.

What’s your growth goal? Are there plans to expand out of state?

TG: At max capacity, we’ll be able to produce 16,000 barrels of beer a year, and that doesn’t include our sours. So we’ll be able to cover the entire state of Virginia and parts of D.C. probably. We don’t want to leave the state.

Where did your different beer styles come from?

TG: At Boulder Beer, we made a lot of traditional beers, ales, IPAs, porters, stouts, a lot of cask beer on a large scale. But [that] wasn’t the type of beer we wanted to make. So we traveled to Germany, Belgium, England, and finally Sweden, looking for traditional styles of beer that we could make here.

And your sour program is amazing.

TG: I don’t want to call them all sours, they cover a wide gamut. Right now we’ve got a golden sour, a Flemish red, a Bière de Garde, even a Bière de Miel that we made with Bill from Blackheath. And the farmhouse beer! Everybody made the jump from IPAs to sours but there’s this awesome middle ground, and that’s going to be our biggest push in bottles. We’re bottle conditioning to start releasing in January or February.

How do you set yourself apart, outside of your beers?

JD: It’s important to us to engage with the broader Richmond community, the outdoors, the environment, non-profits. We’ve met athletes, non-profits that are doing things like clean-ups. We’re trying to support them through time and money, but also in getting them together to build a bigger community.

TG: No way. We made this to start a family business. We consider John [our lab guy] family, my brother might start working here, and honestly, I think the days of those deals are done anyway. For us, we’re just going to build out on our own.