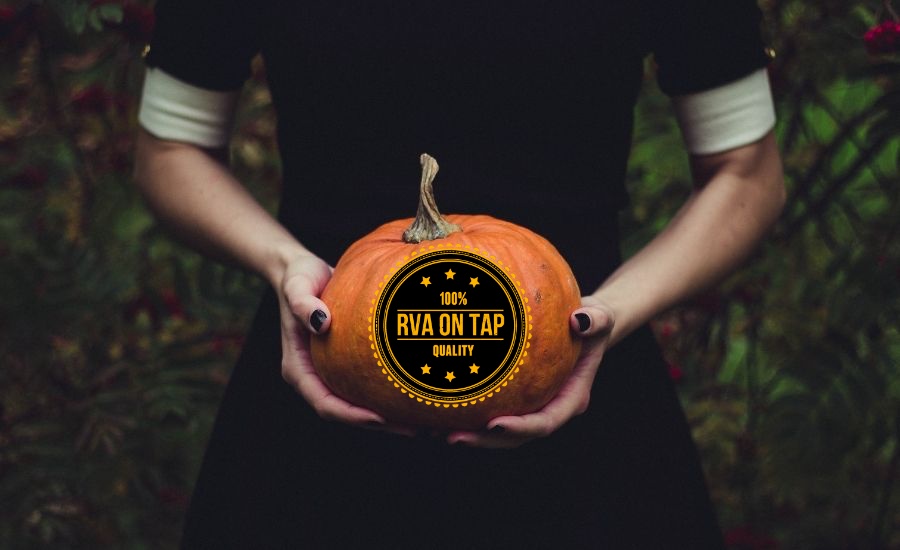 Friday the 13th is upon us again this week, and what better way to celebrate it than starting the Halloween season? Local breweries are releasing some great autumn brews in addition to beginning-of-fall events with spots like Red Vein Haunted House, Septembrewfest at the Science Museum, and a sweet Kings Dominion collab.

Keeping the spooks going, Intermission Beer Company is hosting their Fall Kickoff Party this Friday with Red Vein Haunted House (our favorite haunted house in town!) as the Halloween season gears up.

Head out to Intermission on Friday the 13th this week for their Halloween party and special re-release of All Hallows Ale, a fan-beloved brew that is RIGHT up my alley. This collaboration between Intermission and Red Vein is a harvest amber ale, and it was brewed with maple and cinnamon in the most perfect combination of tastes. Summer beers are good and all, but I live for fall flavors. I can’t wait to light this column up next month with pumpkin beers from all around the state. Y’all stay tuned!

At the Fall Kickoff Party, you’ll also get to jump in for their never-too-early-for-Halloween Costume Contest, win prizes from Red Vein for their haunted houses and the Ashland Haunted History Tour, and get boozy cupcakes with Lush Cupcakes… plus hang out with the folks behind the Coffee With The Dead podcast. It’s the perfect way to get your fall gears turning (and maybe even come up with some costume ideas for next month).

Halloween season is finally here, and it’s only going to get better this month with the release of more spooky brews and themed events. Kicking off this week is an awesome collab between Center of the Universe and Kings Dominion, Redrum IIPA — a blood-red Imperial IPA that’s “packed with as many hops as haunts” and devilishly good.

This 8% ABV ale brings a big punch with its flavor, full of kiwi, mango, pineapple, and other tropical fruits that come together with an earthy finish. If you haven’t made it out to Kings Dominion for their Halloween seasons before, you’ll definitely want to check it out this fall. The park is crawling with things to do, between shows and rides, and haunted houses for those of you who can stomach them (I definitely can’t). Catch me on a hayride picking pumpkins and staying as far away from the scary stuff as possible, drinking on something delicious like Redrum IIPA.

If you’re ready for the brew fests of October but you don’t want to wait, we’ve got just the thing to get your drinking season rolling! We’ve been big fans of the Science Museum of Virginia’s Science On Tap events since they first started, but at RVA On Tap, we’re extra stoked for this one.

Septembrewfest coming up tomorrow night is the latest theme in their Science On Tap series, and these are always a blast. At night, they open up the Science Museum in the dark and turn it into basically an adult playground for the 21+ folks who come out to drink and learn about science in the coolest of ways. My personal favorite parts are always the IMAX shows, which have some incredible space themes and make you feel like you’re sitting in the center of the galaxy — and this one is beer-themed!!!

After the IMAX show, drinking while we learn about the connections between beer and space, some of the best points on this event’s agenda start off with testing your knowledge of brewing in beer science trivia, learning about quick pickling, and turning trash into beverage treasure. For our beer drinkers whose favorite plus-one can’t get into craft beer, you can finally bring them along to a beer event, too: moonshine cocktails, kombucha spritzers, and cold brew coffee are all featured alongside our favorite local breweries like Hardywood Park Craft Brewery, Ardent Craft Ales, Strangeways Brewing, Buskey Cider, Starr Hill Brewery, Legend Brewing Co., and Bingo Beer Co.

You can come hungry, too, because Haulin’ Balls, Sammich, and Gaucho are going to be out slinging eats, with The Dan Scutt Band playing live throughout the night. If you want to grab a discounted ticket, head over to their website ahead of the event on Thursday, and don’t forget your ID when you make it to the door!

Over the weekend, Hardywood Park Craft Brewery dropped Pappy’s Pumpkin Pie in a can release for their #FreshCanFriday. This one brings in more of our favorite fall flavors and even jumps past Halloween into the best flavor time of the year: Thanksgiving!

Hardywood spiced up their Wallonian Farmhouse Pumpkin Ale with extra additions of cinnamon, ginger, nutmeg, clove, and allspice, then topped it off with vanilla bean, toasted coconut, and lactose. All together, this beer pulls all the best things together to taste like Thanksgiving in a glass and feel just like your grandparents’ homemade pumpkin pie.

Also coming up at Hardywood is the West Creek 5K for ALS on Sunday, which takes participants all through the West Creek neighborhood, twisting between the woods and landing at Hardywood’s awesome farmhouse. Folks of all abilities and ages are welcome, with wheelchairs, ADA tricycles, and jog strollers all invited.

Over at Väsen Brewing Company, the German Festbier is making its way back to the taps on Friday. In mid-September, this deep amber lager is made for the season, with a rich malty character from its Munich malts. It’s also got notes of fruits and spices from noble hops and its Bavarian lager yeast, and this frothy brew comes in half-liters in true German fashion.

“Zum Wohl!” Väsen says, so throw your glass up with a Cheers! and join them for the great return.

I don’t think there are many foods outside of a straight-up pumpkin pie that I could love like I love sweet potatoes. Our friends at Ardent Craft Ales have done it again, this time with their Sweet Potato & Sage Saison in a dry, farmhouse-style beer releasing tomorrow night at the brewery.

You’ll catch earthy notes balanced with fragrant aromas between the sweet potatoes and local sage flavors, with a continental malt backbone and subtle hop presence. Coming together in a drinkable 6.4% ABV, this brew is well-rounded and great for any time of the week when the nights start to cool down. Head over to Ardent tomorrow night for a taste, and grab a bite from the Go Go Vegan Go food truck out in the beer garden to pair with the release.

This Sour IPA has a full-on citrus punch, with “more blood orange than reasonable” added in along with grapefruit to take it to the next level. Bag after bag of fresh citrus-forward American hops went into the dry hop, according to the brewers, to create the perfect blend of sweet orange, grapefruit, and a bit of tart lemon citrus.

Out at Final Gravity Brewing Co., the #55 Hazy IPA is dropping this Sunday in honor of Quy Pham. This special release is a hazy IPA that hits in at 6% ABV, and brewed with Citra and Falconer’s Flight hops. They’ll be bringing out the new beer with River City Wood Fire Pizza, and they’ll also have rotating flavors of Love Berliner Weisse on tap through the day.

All proceeds from the brand-new beer will go to directly Quy’s family, and they’re bringing it out to go along with the 30 mile ride on the Capital Trail for the second annual Tour de Quy. This year, the event is taking place as a fundraiser for Quy’s family, Final Gravity will be out biking in their support. If you want to come out for the event, make sure to check out their page here and get tickets to come show your support as well.

Another multi-release went down at The Veil Brewing Co. last night, starting off with Never Never Gonnagetit Gonnagetit. This 5.1% ABV beer is a Gose brew made with sea salt, double blackberry and double boysenberry additions, and double raspberry purée to pack in all the flavor possible.

The Veil also debuted Supernatural Creature, a brand-new Double IPA that was brewed with a blend of base malts, flaked oats, and flaked wheat then heavily hopped with a complex blend of Citra, Galaxy, Enigma, Motueka, Waimea, Amarillo, and Mosaic hops — so if you’re looking for a big variety in your flavors, you know what to try!

Next up in their releases was @[email protected]_natureboi, another Double IPA (my absolute favorite lately). This one was created with rolled oats before being double dry-hopped with Citra and Motueka hops, and hitting in at 8.5% ABV, it’s great if you want to swing by for just one beer and still get your fill.

The brewery is hosting an oyster roast this Saturday as well, teamed up with Ruby Salts Oysters and Savory Grain for the annual event. You’ll be able to get your oysters raw, grilled, or in an oyster stew, and the festival is also bringing out The Veil’s stouts for the season, with 10 stout beers pouring outside starting at noon and going all day.

Castleburg Brewery and Taproom is bringing out the second of their hazy IPAs this Friday with Seize the Throne IPA. This brew was made with Azacca and Idaho 7 hops, and it’s packed with notes of pineapple and grapefruit to hold onto summer a little longer and “seize your taste buds” in all the best ways. It’s a light straw hazy color that comes in at 6% ABV, so this easy-drinking beer is great for beer lovers of all kinds.