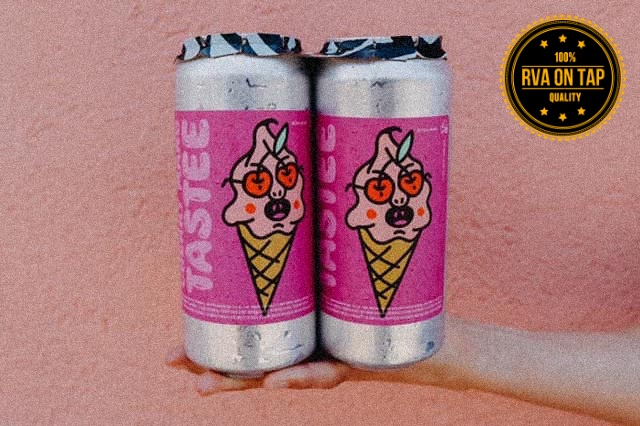 Did you miss me? This week, we’re jumping back in after a week off (thanks to all our beautiful beer people for being patient while I took my first vacation break from writing the column since last fall). I’m home from a lovely week with the fam, tanner than ever, and super stoked to be back to my beer world. We’re going to check out some extra-awesome events this week, and catch up on a few special releases that happened over my holiday. Local brewers are dropping tons of multiple releases this week, too, so if you’re in the mood to try something new, we’ve got you covered. Drink up, y’all!

Happy Pride Month, everyone! Your faves at Hardywood Park Craft Brewery are celebrating big. This coming Sunday, Hardywood is honoring all the folks over the years who have worked tirelessly, marched bravely, and stayed strong in the fight for human rights despite our nation’s enduring resistance to equality.

As Hardywood so notably stated, these rights are grounded “on the foundations of love and equity,” and they continue to write love into our future. Well said, y’all. And on that note, they’re throwing a party to commemorate the fourth anniversary of the Supreme Court ruling on marriage equality with what they do best: beer.

For the high-spirited occasion, they’re bringing back a brew made for uplifting times like these. Tropic Like It’s Hot is Hardywood’s passion fruit, pineapple, and dragon fruit-laced sour recipe that comes along with a tart, dry finish to stay refreshed on hot days. During the event, they’re hosting three live bands plus two drag shows, and tons of awesome local vendors. Catch places like Dayum This is My Jam, Maven Made, Chop Chop RVA and more, plus food trucks like Haulin’ Balls and King of Pops. Yum!

The Veil Brewing Co. has more than one something up their sleeves. Cherry-Mang Tastee dropped last night, along with Taste Test and the return of Crucial Shredder.

Cherry-Mang Tastee started off the group, and it’s not your usual brew. This smoothie-style sour ale was created with milk sugar and cherry and mango purées. You can catch it at the brewery now (while they last), along with Taste Test: a West Coast-inspired Double IPA. Taste Test is fresh to the taps, a brand-new release brewed with Simcoe, Amarillo, Centennial, and whole-leaf Cascade hops. The Veil’s third release in this week’s Tuesday night series, Crucial Shredder, is making its second debut at the brewery as a blend between two old favorites. I’m sure you remember Crucial Taunt, a fan favorite and delightfully-hoppy beer that’s now been blended with Master Shredder to create this 5.5% ABV collab brew.

Speaking of old favorites, Pegasus Double IPA is making its way back to Final Gravity Brewing Co. on Friday. This “mystical blend” of pineapple, citrus, and fresh pine was made to send your tastebuds soaring — and it’s meant to create a surge of flavor reminiscent of the magnificent beast it’s named after.

According to Final Gravity, much like the legend that “the winged horse struck his hoof to the Earth,” Pegasus DIPA will inspire its drinkers with the surge of flavor that comes from its Falconer’s Flight hops. It carries a golden haze in color, and it’s got a nice citrusy-hop flavor in its profile.

Richmond brewers are really upping their multiple-release game this week. First with The Veil and again with Canon & Draw Brewing Company, this trend is one I’m on board with. Canon & Draw is dropping their Peaches n’ Cream fruited IPA this Friday alongside their Sole Accomplice IPA, brewed with Simcoe hops and coming out as part of their fruited IPA series. Sole Accomplice is going to be a recurring theme over at the Main Street brewery, a rotating series that’ll highlight a specific hop with each new recipe it makes.

An extra-cool part of this week’s series is that Peaches n’ Cream is coming out on National Peaches n’ Cream Day. Who knew this was a thing?! Who’s been keeping this from me? I can’t wait to celebrate it.

While I was shoulder-deep in the ocean living the dream last week, The Answer got fresh goods in to your favorite brewpub in town. Everyone knows The Answer for their stellar glasses (let us not forget all the times they’ve excited gamers, fandoms and more with glassware for every interest) and they introduced a brand-new design. Their Platinum house glasses went on sale right after our last RVA On Tap together, so go grab one while you can!

In more news at The Answer, Medical Glycol Card dropped over our break as well. This Double IPA was brewed in collaboration with Burley Oak, and with its Cashmere, Enigma, and Cascade hops, the brewers noted its healing properties — but reminded us to “always consult your glycol shaman before you imbibe.”

Interstellar Burst started off last weekend’s new beers, a Double IPA with flavors of passionfruit, pineapple, grapefruit, and mango that was generously hopped with Galaxy, Citra, and El Dorado hops. It’s got deep and plush fruit flavors, according to the brewers, and it was the crowd favorite of the week. Nectar and Knife also made a new debut in Fulton, made with Simcoe and Mosaic hops to give off the bright, grapefruit-pulpy zest and softness of a DIPA well-done — and zero bitterness. Origins Double IPA returned to Triple Crossing as well, and it was inspired by the beautiful Northeastern U.S. It’s got a balanced caramel-malt sweetness to complement the bitterness of its hops — Simcoe, Centennial, Mosaic, and Amarillo — and its style was pioneered in the “densely-wooded” states it was made for.

In more events this week, don’t miss the Powhatan Music Festival with our buds at Fine Creek Brewing Company. Hosted out at the Village Meadow, the festival will be packed with live music all day long with artists like Maddie Leitch, East of Hollywood, PumpHouse Blues, Kyle Davis, and The Commonwealth Bluegrass Band.

You’ll get to catch some of your favorite local wineries in addition to the delicious brews served up by Fine Creek, and this “One Day of Music” will certainly be one for the books. Bring your kiddos along for cheaper tickets (and the littlest ones for free), and grab some grub and beer for the best Virginian-music spirit.

Kindred Spirit Brewing is dropping a new summer release on the first official day of the season, their Orange Dream fruity recipe. This orange and vanilla cream ale is designed to remind you of Dreamsicles and daydreaming under the clouds, and like Peaches n’ Cream, it blends the best kinds of fruit with the pillowy-softness of a cream ale. It’s coming out this Friday out at Kindred Spirit’s spot in Goochland, so head out west and start your weekend off right.

In *another* double release this weekend, Steam Bell Beer Works has two awesome recipes to bring to the table (or bar). On Friday, Idolic and Patchronce are coming out to the taps. Idolic is a complex malt, according to the brewers, with strong notes of caramel, raisin, and plum to give this Belgian ale’s yeast the room to work its magic. It’s “dangerously drinkable” at 10.7%, so don’t drink this one lightly — or do, and don’t remember your Friday. That’s on you, pal. It’s fruity and soft at the same time, and it’s coming out with Patchronce: A light-bodied French Saison that was brewed with raspberries and blackberries.

Keeping the trend going: More double releases, and this one’s special. Lickinghole Creek Craft Brewery is proud to introduce Hemp in the Hills and Juicy #12 this weekend, with food trucks like Sandtopia and Firesides stopping by over the course of the weekend.

If you’re feeling the events and the new releases at the same time, Lickinghole Creek’s got you covered. These beers are coming out with live music to go along with them, like Dropping Julia on Saturday and Michael Melvin on Sunday.

Rather than a one-day double release, these two are being celebrated all weekend long (so if you’re trying to make it out to more than one boozy event like myself this weekend, you can put Lickinghole Creek on your books no matter what).

As if you didn’t need more reasons to wag your tail, Center of the Universe Brewing has a huge one for all of us: Dogs! Bring your pups out tonight for Tail Waggin’ Wednesdays, with food trucks and live music outside at your favorite Ashland spot to brighten up your mid-week blues.

Proceeds from these Center of the Universe events go back to the Friends of Hanover Dog Parks and to the Hanover Humane Society. Freekin’ Rican is coming out for catering, and Ryan Hearn Music will be out rocking the Biergarten stage.

In case you didn’t hear, there is a *ton* of awesome live music coming up at Castleburg Brewery and Taproom. In the next week, we’ve got a good group of upcoming shows to plan on: like Kate Stedelbaur live at Castleburg this Friday, The Embalmers go Surf-Psycho on Saturday, Jim Lord live on Sunday, and Miki Fiki coming up next Wednesday. Castleburg is getting in gear for a good time, as it seems, and they’re here to make sure hardly any nights of your week go unfilled with fun.

Head over to Carytown, my friends, and join Garden Grove Brewing & Urban Winery in collaboration with the Juvenile Diabetes Research Foundation for Brew For A Cure. JDRF is making their way to Garden Grove on Saturday to drink beer for a cause (what’s better than that?) and further their mission to find a cure for type 1 diabetes with research support from the event and its attendees. With raffles and live music from 1:00-10:00pm, you can swing by any time of the day to grab a brew towards making a difference.