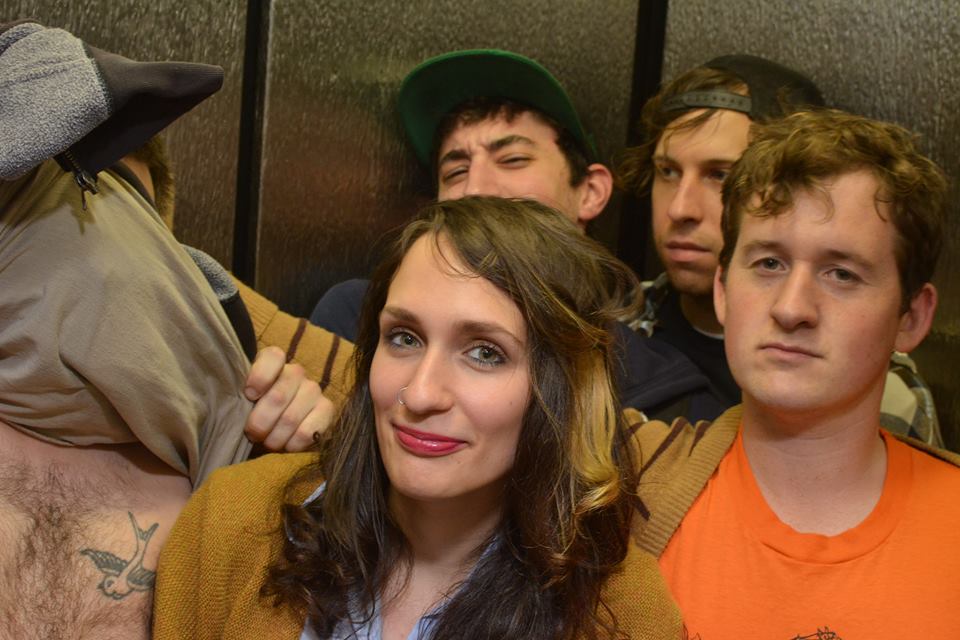 Sure, Speedy Ortiz could easily be written off as just another band everyone listens to just because Pitchfork says they’re cool. If you actually do listen to them however, you’ll understand why they receive all the hype they get.

Sure, Speedy Ortiz could easily be written off as just another band everyone listens to just because Pitchfork says they’re cool. If you actually do listen to them however, you’ll understand why they receive all the hype they get. Their music hearkens back to what indie rock was just a decade or two ago. They’re one of the few actual bands featured on hip independent music blogs, which mostly feature dance or pop acts these days.

One of the most endearing qualities about Speedy Ortiz is that they’re rather down to earth people. Look at their self-run livejournal or the mixtapes they put out as a band. They’re pretty goofy, just like the dumb friends you’ve been going to shows with since high school. They stay true to their DIY ethics, which is commendable for any band hoping to make performing their livelihood.

Speedy Ortiz has made themselves quite popular here in Richmond, not through their online-hipster accreditation but by playing shows at various venues throughout the city and becoming friends with the people in local acts.

I got a chance to sit down with the band after their show at Strange Matter on Monday, January 6. Here’s what we talked about.

You’ve been through Richmond a whole lot the last few months. You’ve played at Strange Matter, Gallery 5, and some of the house show spaces here in the city. You seem to love it a bunch and mentioned it throughout your set tonight. What keeps bringing you back?

Sadie Dupuis (guitar/vocals): Well, Sundials is one of our favorite bands to play with.

Matt Robidoux (guitar): I think we’ve played with them almost every time we’ve been here.

Sadie: We didn’t play with them at Fall Line Fest, but they played it at Strange Matter. But we like them (Sundials), we’ve loved them since before we ever booked a show with them. That’s part of the reason we like coming here. I’ve always been obsessed with Richmond because of Strange Matter. Whenever my old band would go on tour, we’d always eat here. That was always my favorite thing about Richmond; also the jackfruit BBQ stuff here, which they don’t have anymore. I’m speaking for myself, what about you guys?

Mike Falcone (drums): The best macaroni and cheese I’ve ever had in my life here [Strange Matter].

Matt: Lots of people come to shows here and are into it. It seems like it’s a great scene.

Darl Ferm (bass): I love Clipse; I know they’re not from here, they’re from Virginia Beach. I played Richmond with my old band before and I love playing here. I really like the town. The people are awesome here. There’s a real good crowd, we’ve always had a really good audience and people are really receptive to music.

Sadie: One time when my old band played here we met with some people at the show who were just hanging out and it was Matt Pond PA, on a night off from tour. It seems like Richmond is just the kind of place where shows start early, which is a good thing, people come out, people are nice.

Mike: For a place to have a Monday show starting at 6, it was packed out.

Sadie: Yeah, we’re on tour with Grass is Green and they went on at 7:10 and it was packed out.

Mike: Yeah, this was an oddly well attended show.

I’m definitely surprised as well, especially considering that it’s just a few days into the year. Lots of people are still out of town.

Mike: We’re promoting this as an all-ages tour.

Darl: It does make a big difference.

Sadie: I noticed there were a lot of people who could be of all ages. We’re doing this tour all-ages and we’re only four nights in, and I think this [is the] night where I felt it most extremely. It’s cool that anybody could attend. I saw people at the door who I figured were about 16 getting in. It was like, “fuck yeah.” 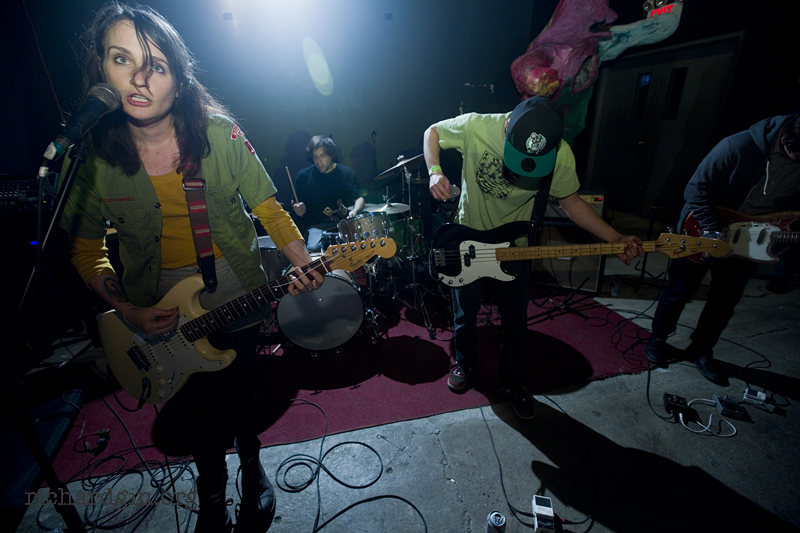 What’s the scene like in Boston? Are there a lot of shows which are age-restricted? Did that play a role in you guys wanting to make sure all the shows were all ages?

Darl: It’s a huge deal in Boston. If you have an all ages show in Boston, it’s very rare.

Darl: It was hard for me even when I was 18, because there were a lot of shows that were 21-plus.

Sadie: We just want things to be as accessible as possible. I think we wind up on a lot of things supporting someone else where we don’t have much of a say in how it’s run–like shows are going to be 21-and-up, or have a fairly expensive door cost. So when we have a little more control of things, such as when we’re on our own tour that we’re booking with our friends, we want as many people to come as possible, so keeping ticket prices low as possible and making sure people can get in if they want to is important to us.

As far as Richmond goes, what are some of the bands you like from here? You guys always mention how much you love Sundials. Who do you guys hang out with, where do you guys like to eat around here?

Sadie: We come here every time. Even when we’re on our way to somewhere else, we’ll stop in Richmond just to go to Strange Matter.

Darl: I also really like all the museums. I went four or five years ago, but they were all awesome.

Matt: Give a shout out to all the Gunboat kids. We played with them a few months ago and they’re really great.

I noticed that Matt has a cassette tape distro as part of your merch setup. What can you tell me about it?

Matt: It’s my record label, Hidden Temple Tapes. I’ve been doing it for three or four years. I just try to put out mostly New England stuff and some things from the midwest. It’s all cassettes except for one LP. We did a release in 1930 tobacco tins recently. I want to do more unconventional packaging. Just to do something different for an already established artist, or put out something that wouldn’t be heard otherwise. Like, Mike and I just recorded our friends’ bands a week before they played their last show. They didn’t have existing music and now they do.

You’re releasing a new EP, Real Hair, sometime in the next month. What can you tell me about it?

Sadie: Yeah, we played three songs of the songs tonight. That’s my fact –

Mike: It will be on a twelve inch, 45 RPM for expanded high fidelity sound.

Darl: Three of the four songs are in drop D [tuning]. Not saying which.

Sadie: I think it almost sounded like Sundials when we first were recording it.

Mike: I play backwards guitar. I played guitar and then they reversed it. I also did that on “Casper.”

What did you guys do for New Year’s? I guess you weren’t on tour yet, but I imagine it was fun.

Sadie: Mike and I got wasted! We went to see our friends, Grass is Green play with Krill and Two Inch Astronaut and Kal Marks at a Pizza Place [Allston Pudding]. I don’t usually wear tall shoes, but I wore really tall shoes, and I haven’t been able to feel the toes on my left foot since New Year’s Day. It’s been a week now. I’m thinking I might have to get them cut off.

Matt: In Northampton where we’re from, there’s a ball that rises instead of drops right near my house, so that’s where I was.

Being just a week into 2014, what are your plans for the rest of the year?

Mike: We’re going to Europe right after [Real Hair] comes out. Then we come back for a full US tour. At the end of it we’ll be touring with Stephen Malkmus and The Jicks.

Sadie: Then we’re going back to Europe in May, then after Europe we’re doing a small amount of US stuff in early June, which I’m probably not supposed to talk about the specifics of yet. So let’s say it’s a big mystery with meddling kids, a van and a dog.

Sadie: We’re going to take a nap after that.

Thanks for the interview. Anything else you’d like people to know?

Sadie: Tell everyone Grass is Green is our favorite band.

Matt: If there’s anyone into cassette culture, check out cassettegods.blogspot.com.

There's so much. So much more than even I knew when we started this whole process. I keep sending myself emails in the middle of the night... READ MORE

He pulled his Ford F-150 in front of the Starbucks on Robinson Street like it was some kind of mobile command unit. Loud music getting... READ MORE

There's so much. So much more than even I knew when we started this whole process. I keep sending myself emails in the middle of the night... READ MORE

He pulled his Ford F-150 in front of the Starbucks on Robinson Street like it was some kind of mobile command unit. Loud music getting... READ MORE