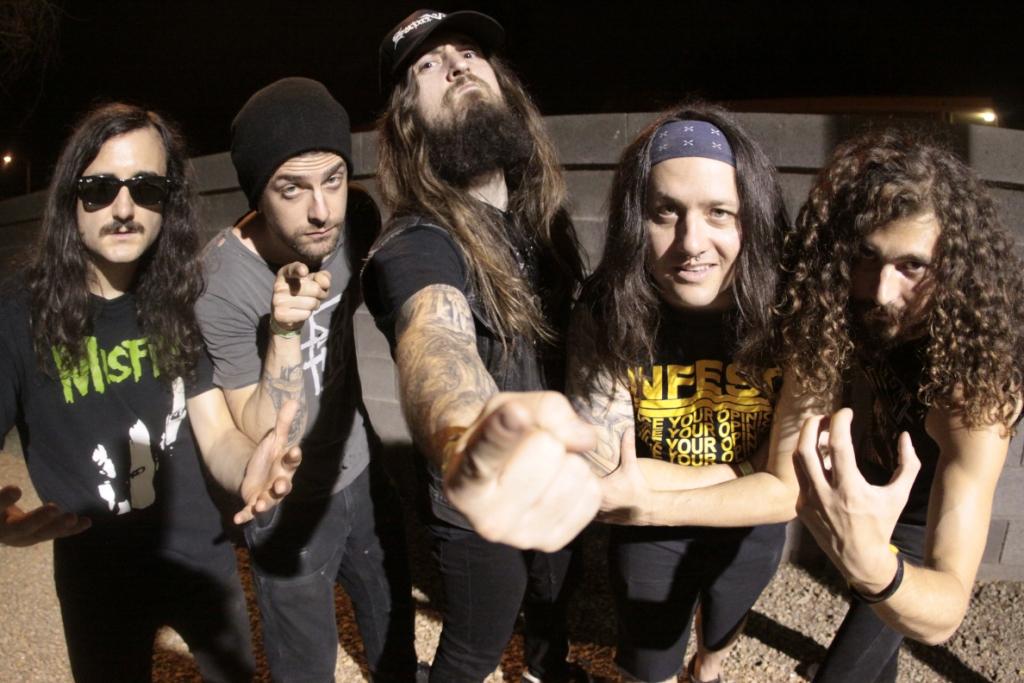 Prepare for a double dose of Iron Reagan this week. Not only will the hardcore/punk/metal band be playing in Richmond on Wednesday, but they are also releasing a free EP!

Prepare for a double dose of Iron Reagan this week. Not only will the hardcore/punk/metal band be playing in Richmond on Wednesday, but they are also releasing a free EP! Iron Reagan, a project featuring Municipal Waste’s lead vocalist Tony Foresta, formed in 2012. They released a demo that year, following it in 2013 with a full-length called Worse Than Dead on Baltimore’s A389 Records. Their most recent release is a split EP with Exhumed. “It’s kind of a strange release, you know; a hardcore band and a death metal band doing a record together–it’s kind of a weird pairing,” Foresta said. “But once you hear it, it makes sense. It’s just a raw, fun, record.” Tankcrimes has already gone back for a third pressing of the vinyl version, “which is pretty outstanding for a 12 inch split record.”

This week, Iron Reagan is releasing a new EP through Decibel Magazine. This EP will be the first release with their new lineup. Late last year, they added a second guitarist, Mark Bronzino from Texas-based band A.N.S., and a new bass player, Rob Skotis, who also plays bass in Hellbear. “It’s one of my favorite things I’ve ever recorded… and been a part of. It’s really fucking cool.” The EP will be 13 songs in the space of about 7 minutes, and absolutely free to download. The EP, Spoiled Identity, will also be included as a flexi-disc in the next issue of Decibel; subcribe now to get your copy (flexi-discs are only included in subscription copies of the magazine). Stream it below, or go to Iron Reagan’s Bandcamp page to download it.

In addition to the EP, Iron Reagan has been working on a full-length to be released via Relapse Records. “We’re tracking 31 songs and will pick the best of what we got. I’ve been screaming for the past three days trying to get out a little bit of personal stress,” Foresta said. “It’s therapeutic to be [recording the record],” he continued, adding that the amount of songs they write allows them to rearrange lyrics and throw away songs they don’t end up liking.

Iron Reagan’s tour will hit all over the United States in the next month, including MACRoCk in Harrisonburg and Brainsqueeze in Oakland, California. Brainsqueeze will also feature a lot of other Richmond bands, such as BAT, Cannabis Corpse, and Municipal Waste; “It’s gonna be a big reunion of friends out west so that’s gonna be cool… like our little Richmond family of bands,” said Foresta.

The band will also be playing during “Dark Lord Day” at 3 Floyds Brewery in Indiana. It’s the premiere of a beer called “Dark Lord,” which seems to suit to Iron Reagan’s taste. “It worked out that all this stuff was going on when we wanted to tour, so we booked the tour around [the events]. We asked [fellow RVA band] Occultist to come with us because they’re fucking awesome,” said Foresta.

Foresta expressed his excitement about playing in Richmond because he doesn’t get to play in Richmond very often with Iron Reagan. “I love going to shows and I love supporting the scene, and being a part of something,” he said. “It’s cool to play when I’m at bars and clubs that I grew up in.” He added that he is also excited to play with some of his favorite bands from RVA. “I’m really excited about playing with all the bands here, bands that I’m super into, like Asylum, that’s one of my favorite local bands right now.”

As for Municipal Waste, they will be going on tour in South America a little while after Iron Reagan completes this tour. “This will be our second time going out there, and it seems like it’s gonna be really good,” said Foresta.

What can the audience expect to gain from this show? “A black eye and a big smile,” according to Foresta. Iron Reagan will be playing at Strange Matter on Wednesday, April 2, accompanied by Occultist, Humungus, and Asylum. Doors open at 9, tickets are $7. For more info, click here: https://www.facebook.com/events/595215563894388/