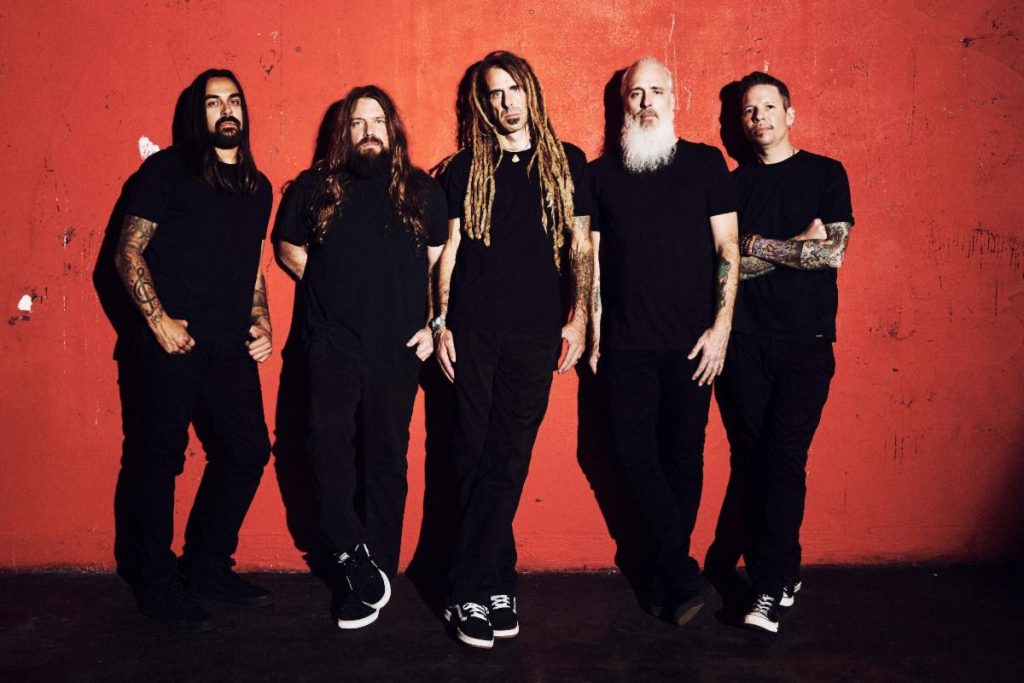 Richmond metal legends Lamb Of God will release their first new album in five years tomorrow. We caught up with them to find out what it’s like to return to action in midst of a pandemic.

As a new decade has dawned, a new chapter is beginning for Richmond-based, legendary heavy metal band Lamb of God. The release of their self-titled eighth studio album is upon us, and never before has there been a more authentic representation of their presence in the scene. After over a year of work specifically for the album, and 26 years developing their identity and musical strength, Lamb of God has reached a critical mass. This new album encompasses everything the guys have worked so hard to create in their sound with skull shredding riffs and haunting, emboldening rhythms.

“We’re embracing our veteran status and becoming OG’s in the scene, so to speak, and we’ve got a new drummer so we’re really energized by that. The moral and vibe in the band are up interpersonally,” said Lamb of God guitarist Mark Morton. “It’s at an all time high, and it really felt like a definitive moment for us. 26 years in, we are at one of these benchmarks of our career, and for us, creatively and artistically.”

This benchmark moment has come to mean so much more beyond simply the years put in and the fan base amassed. After five Grammy nominations and numerous other acclaims, what Lamb of God is focused on are their roots and the vast growth of musical talent each member has collaborated to create. This pinnacle of growth was also what led the guys to make the album self-titled.

“It always seemed to feel like it was an uninspired move [to self-title an album], like a bit of a fall back or cop out. This time, it was really quite the opposite,” said Morton. “There were other ideas for titles, and good ones; it’s just, we were waiting for this album and this moment where we really felt like, more than a new album release, this was really a new era for the band.”

The new album is raw. It’s angry. It’s an inspired representation of the aggression so many are feeling at the hands of the system, aggression that has only heightened in the grips of a sweeping pandemic and political unrest.

“Divide and conquer and close them in, and bury secrets deep. Make America hate again, and bleed the sheep to sleep,” go the lyrics from “Checkmate,” a song that was released as a pre-album single. These lines seem to signify the rhetoric of the current administration, in contrast to the pain felt by Americans everywhere. However, the band’s members aren’t necessarily interested in such a specific interpretation.

“I’m not one of these people that ever likes to talk about the literal details, inspiration, or meaning behind lyrics,” said Morton. “[Singer] Randy [Blythe] sometimes does, and that’s cool for him, but for me when I write, I don’t like to characterize everything so detailed, because I feel like that robs the listener of how they might relate to it on their own.”

The new album is a family affair, in that it includes participation from fellow members of the family of metal; specifically, Jamey Jasta of Hatebreed and Chuck Billy of Testament. And while a self-titled album is often not the place for featured artists, it’s clear they were more than mere guests on this monumental record.

“It goes way beyond sharing a stage with them or having gotten to know them over the course of a tour or something like that. Those guys really are close friends and family,” said Morton. “To invite Jamey and Chuck to appear on a couple songs… it was so natural for us.”

During the pandemic, this family has felt the hit of uncertainty. Chuck Billy and his wife Tiffany were both diagnosed with COVID-19, as were a number of Testament’s crew members following the band’s most recent European tour. As issues developed, the guys of Lamb of God kept close tabs on Billy and those affected, and luckily, it wasn’t too long before everyone made full recoveries.

Due to these and other issues relating to the pandemic, Lamb of God had to postpone the release of their album from May 8th to June 19th. This change was made to ensure there was no extra load placed upon essential mail and delivery workers while they perform much-needed services for transportation of essential goods.

“Obviously this pandemic is affecting everything, so for me to bemoan how it might impact the sales of my record would seem kinda trivial. A little self-absorbed,” said Morton. “Hopefully, on a more positive vibe, maybe it’ll bring some people some relief, some sort of cathartic joy. It’s a really heavy record — sonically, musically, lyrically — so maybe that’ll resonate with people in such a turbulent and frightening time.”

With all of this down time in between recording and releasing the album, and even more between these things and touring, the guys of Lamb of God have been doing what they can to bide their time with purpose.

“I have, interestingly enough, been playing the guitar more than ever,” said Morton. “As someone who plays guitar professionally, for a living, there are times when I really don’t play guitar for a couple weeks at a time, like I really literally won’t play guitar.” Now that he can’t do it for a living, though, he’s finding new ways to approach his instrument during the downtime.

“One of my favorite guitar solos is in the Steely Dan song ‘Kid Charlemagne,’ and it was real tricky shit to learn,” Morton said. “It was really good for me to be out of my comfort zone, having to work in different shapes and different patterns then I’m used to playing. I realize I sometimes get caught in this trap where every time I pick up a guitar, I feel like it’s gotta be career-motivated. I sort of retapped into this idea that I really, really love playing guitar.”

While we might not get to see these particular influences come forward in Lamb of God’s music, Morton does have a solo project, with both an EP and a full-length album so far, 2019’s Anesthetic, which showcase this classic rock side.

Regardless of the roadblocks and time passed, the guys in Lamb of God are looking forward to getting their music out there and getting back on the road. Going out and representing Richmond around the world is intrinsic to the band’s mission, and they’ll spread that positivity whenever they can.

“Honestly, with everything that’s going on, I’ll just be excited to be on stage again and making people smile,” said Morton. “That’s the coolest thing about what I get to do, you know? When we take the stage and I’m glancing out into the crowd for the first time of the night, everybody’s smiling. People are happy at these shows, and it feels good to be a small part of that system. Makes me feel like we’re doing something good.”

Lamb of God’s self-titled album is out June 19th on all streaming platforms, and you can get your copy on the band’s website (lamb-of-god.com). The album tour is set to begin in October, but you can keep updated on these events on their website as health guidelines and venue openings progress. Whenever they get out there, it will be well worth the wait.