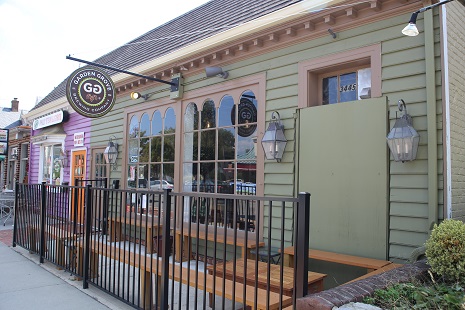 To say Mike Brandt is a perfectionist with his craft is a bit of an understatement.

To say Mike Brandt is a perfectionist with his craft is a bit of an understatement. He’s done everything from homebrewing, to working for a small scale brewery, to wine making, even becoming a research scientist at VSU delving into fermentation science to hone his skills. Brandt, along with Ryan Mitchell and John Paul Cheski, now run Garden Grove Brewing in the heart of bustling Carytown.

The brewery, which marks the 100th for Virginia, just opened in February and has released 40 beers with about 10 or 11 regularly on tap including wine-like sparklers.

RVA Magazine recently had a chance to sit down in the brewery’s taproom, which is filled with everything from drawings of Iggy Pop and Christopher Walken, to a painting of RGIII, to a black guitar, and chat with Brandt and Cheski and find out about Garden Grove’s beers, their brewing process, trends in the industry and taste some of their latest brews. (Check out the bottom of the article to see a description of all the beers pictured in the article) 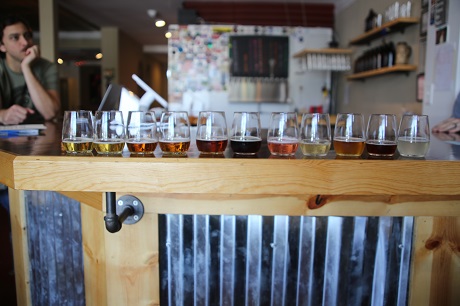 All of Garden Grove’s beers are influenced by Belgian and British brewing styles, Brandt’s favorite. What did you think he was going to say hoppy, IPAs? Nope. Brandt is bucking the trend which seems to be saturating the market as of late his creative beers, but we’ll get to his strong opinions on that later.

“British beers have been made for a really long time so they have a rich tradition,” said Brant. “They’ve had a really long time practicing and figuring out what ingredients go best agriculturally speaking in their climate, they’re amazing at it.” American beers, we’re still young punks. They typically have better balance. Belgian beers more than any beer style I’ve had remind me of wine. Really complex, higher alcohol contents, amazing, wonderful flavors that are really intense that somehow work together to tell a story. You can have different experiences that keep life fun.”

Brandt started out experimenting with brewing at home first because he just couldn’t find much around at the time that satisfied his palate.

His wife, sick of his complaining about the lack of good beer, brought home a homebrew kit and said ‘well make it yourself then.’

And ne never turned back. He started brewing himself in 1997 and from there, he went on to work his way up the ranks to assistant brewer at Calhoun Brewery in Harrisonburg in 1999. 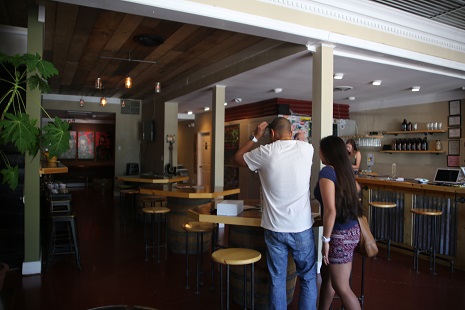 “I probably only brewed there for about six months because he {head brewer} was only allowing me to do very simple tasks, he wasn’t making a ton of beer at the time, they were just getting going, the education I received was largely academic,” Brandt said.

Around this time is when John Paul Cheski came into the mix. A roommate introduced the two and their love for beer led to them becoming fast friends. 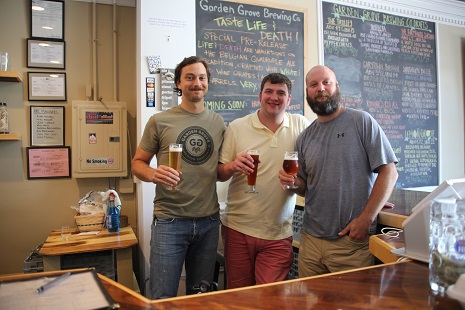 “I would hang out and help him with the busy work of homebrewing and in return got to drink the rewards,” said Cheski. “Mike showed me what great homebrew was about. I truly believe he’s on another level, he has so much life experience and perspective informing his process.”

Besides working for Calhoun Brewery, Brandt also ran a beer and wine making supply store in Harrisonburg which was eventually shut down about the time the city opened up a library right across the street from it.

“I wasn’t interested in fighting it, I was over retail and wanted out of sales,” Brandt said. “I wanted to stay in production and stay in making alcohol.”

But to Brandt’s dismay, there weren’t any places brewing beer within a driving commute from Harrisonburg in the early 2000s, so he decided to take try his luck at a new venture: wine.

He got a job at Naked Mountain Winery in Markham, Va., as head winemaker in 2002 and eventually moved on to Linden Vineyards in 2006.

“I was very happy there, (Naked Mountain) but Jim Law, the owner of Linden was making better wines than me and I had to know why, so I asked him if he would hire me and I quit Naked Mountain,” Brandt said.

This is where his experience in the industry would come in handy in cultivating a creative lineup for Garden Grove. The brewery, in addition to its beers, touts a wine-like series called sparklers, which are a blend of wine and beer.

“It’s technically called a braggot, a hybrid between a mead and a beer,” Brandt said. “I wanted to have a gluten-free product and I wanted to have flavors that are strongly reminiscent of wine.” 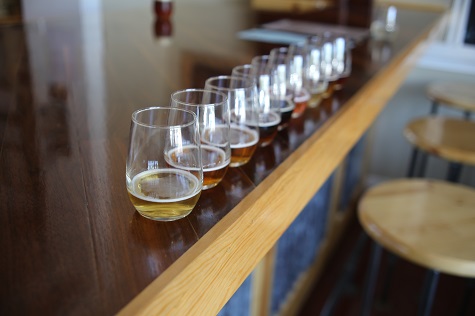 Garden Grove sells a Watermelon sparkler and Southern Belle sparkler, which was a favorite of mine during our visit.

When it comes to brewing, Brandt said the fermentation process is slower with the sparklers than with the beers.

“When you ferment something with a large proportion of honey it’s typically slower because honey lacks nutrients required by yeast,” he said.

Not many brewers around have a background in wine and use it in their process. Brandt said his experience in that industry has definitely influenced the way he does things at Garden Grove.

“I like trying to pull out flavors that remind me of wine, hence our Belgian quadruples, “Life” and “Death”, Belgian beers in general, aging beers in wine barrels, and our sparkler series,” he said. “In the wine industry, I learned the importance of balance and quality ingredients, you are only as good as your ingredients.” 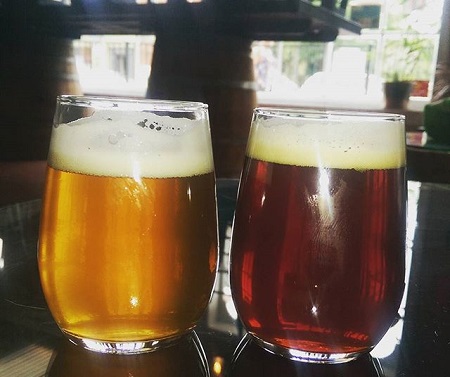 And as I mentioned before, his interests go far deeper than a love of beer and wine.

To learn more about the fermentation process, he spent four years at Virginia State University as a research scientist. He just finished up there this year and was still working there while he worked at the brewery.

“I worked with Laban Rutto, he’s an Alternative Crops Research Scientist, the research I started focusing on was a plant called stinging nettles,” he said. “The research focused on nutrient pollution remediation, fiber, goat & horse feed, & medicinal properties, he was trying to see what benefits this plant could have.”

After some painful experiences with that, Rutto allowed Brandt to write his own grant and he became the first person in the state to grown wine grapes organically along with some other pretty cool experiments that would help him later when he opened his own brewery.

“He also let me malt various sorghum varieties we were growing to determine the potential for use in the gluten free beer market,” he said. “We grew finger millet which is an African variety of grain that I actually made a beer with here that won a bronze medal for our English Mild/Brown Ale the “Broke down Soldier”.

And with 40 beers under their belts, you’d think the brewery would sit back and relax for a bit, but Garden Grove is doing the exact opposite. They have some pretty big expansion plans on tap for the fall. 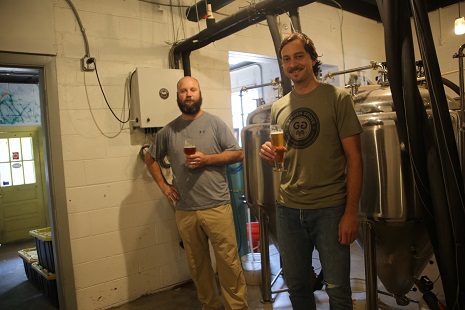 Cheski said they’re getting two seven-barrel tanks and with the new tank, that will be up and running next month, Garden Grove will be able to make 14 kegs.

Brandt said they started off with four three-barrel fermenters.

“We could only make 12 barrels worth of beer at a time, which is really small.”

Garden Grove also bought 12 wine barrels and is using them to not only age beers fermented in tanks, but to also ferment in.

“By buying those wine barrels we increased our fermentation space by six,” Brandt said.

By October of next year, Brandt said he hopes to produce 750 barrels.

After talking business for a while, I had to ask the question every longtime craft brewer hates so answer: “What’s your favorite?”

“To have to pick one is painful, I’m afraid there’s some Sumerian prankster God that is going to come down and go ‘ha ha! You only get that now!’” Brandt said.

When it came down to it, he managed to narrow it down to three: Chimay Blue “The Grande Reserve”, “Succession” by Wicked Weed and “Lou Pepe” by Cantiillon.

But one type of beer that Brandt isn’t too fond of that dominates taps and grocery shelves everywhere everywhere is the IPA.

“Almost every single brewery is doing IPAs, because that’s what the market for some reason wants,” he said. “I do not understand how the American palate went from no flavor to aggressively bitter with nothing in between. I’m going to try to stay calm about it and not go over the top, but I think it’s a dumb trend. Really what it is, it’s such a great canvas, beer is, why are we only doing hops?, Why can’t I taste the yeast, why can’t I taste the malt?”

Good question. Take a look next time you’re out a brewery or bar and see how many they have.

But even with his feelings on the IPA, Brandt still carries one on tap that they just introduced called “Southern Session Batch 3.” Garden Grove also recently released its “Life” and “Death” beers, two Belgian ales which you can read more on below. The brewery will also debut a barley wine coming out in the winter and a new sparkler in about a month.

The brewery is located at 3445 W. Cary St and tasting rooms hours are 4 pm to 10 pm Monday through Wednesday, 4 pm to 11 pm Thursday, Noon-2 am Friday and Saturday and Noon to 10 pm Sunday.

Pictured beers above from left to right: 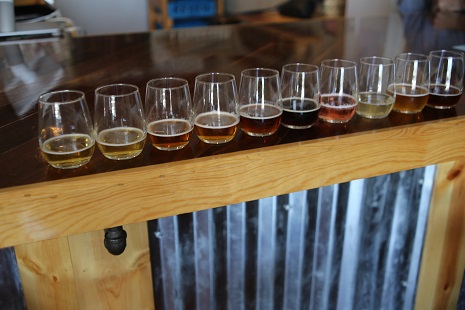