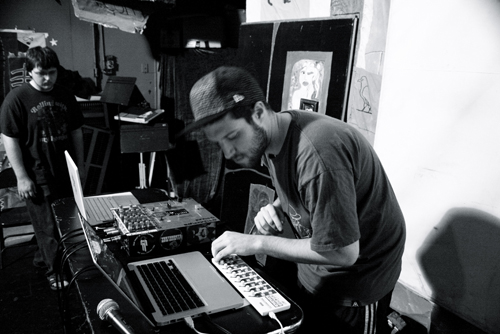 Alina: What do you call your music style?

Devonwho: That’s the million-dollar question. I’ve been thinking of the way I can describe it. The music that I make personally is somewhere in between (and it’s not even the genre because I think genres are starting not to exist in this kind of music so much) hip hop and electronic. It has the same BPM and the same feeling as hip hop, but with all the elements of electronic. A lot of effects and synth work, but not as much sampling…at least the stuff I make.

What draws you to this sound?

Well, I didn’t have any way to sample for a really long time, so it made me learn the keys and now I’ve found that I really like to play out my music and actually create it from scratch. That’s where I started: just sampling stuff and putting drums behind it. Making hip hop, but I really like the heavy electronic sound.

How did it all progress?

To begin with I was in blues and funk bands, and when I was about nineteen I began listening to hip hop and wanted to make the beats, cause I was a drummer. So I used to sample full records and whatever stuff I could find. And I’ve always listened to electronic as well, since well before that, but the influences there I haven’t really incorporated till about two years ago.

I think that’s why my songs all sound so different because I’m always trying to experiment and do different things with it. I use software, I don’t use any hardware. For example for synths, I use soft synths, plugins for my computer. I use Ableton Live. The cool thing about it is that it’s called Live because it’s used for performance. You can use it to perform, you can produce, you can record vocals. You can do anything and everything you wanna do. Then you can take all that and put it in your songs and take other people’s songs, and play them live, mash them up, mix, DJ…it’s pretty amazing.

Do you perform live or with songs you’ve already created?

Usually I do songs I’ve already created. I really want to incorporate live elements, but I just have a broken mini keyboard. I need to advance a little bit and get some more things, so then I can start playing live. I would really like to do that, but for now I’m basically just DJing elements of my music while at the same time putting effects on them live, and blending things live, so DJing essentially.

When I see people perform electronic shows sometimes I feel so removed. What do you think could help bridge that gap?

Yeah, especially when you are performing little things really help. My friend and collaborator, Dibiase, he uses a 404 and he won’t even get on stage, but just stand out in the crowd with it, and involve the people and they can see exactly what he’s doing and he’s with them standing on their level, not hiding behind a desk or a table or whatever. That’s something I want to work on.

I work with some rappers, but mainly I like to work with other people who make music. Maybe even send files back and forth through the internet, add elements, or actually sit down with somebody and create something in a studio.

I also have a project with two other like-minded musicians, well three: two guys and one girl. We’re called Klipmode because we use the Ableton and it’s kinda a play on it.

It seems like your music has a large international community.

I went to this beat battle last week that was pretty interesting. They sit down, and they’re given samples right on the spot, and everyone sits there for an hour and they make something. The people are electronic producers, hip hop producers, and they all get together and create just from that. You get to hear everybody’s and there’s some that are like house and there’s some that are like hip hop and it’s really cool to hear. I think that’s what’s really happening right now, is that those two genres are really blurring a lot more because it’s all based around the same production equipment.

But here it’s mostly indie rock. The electronic scene is pretty thriving too, I guess. It’s coming up here slowly, we get a lot of the artists coming up here, but don’t have much of the homegrown.

So what makes your stuff, yours? What’s unique about the way you do it?

I’m really influenced a lot by funk. I’m really positive and happy, so a lot of my stuff is a lot of major and really happy music. I feel like that’s why Europe loves it. I do a lot of cheesy synths, and all my group, too. We do a lot of the same kind of thing. We all love the cheese. We love it.

I’d say the biggest is probably this guy, Jneiro Jarel and he’s awesome. He’s a multifaceted musician as well. He raps, makes beats, plays instruments, incorporates it all into one big thing that you can’t really define as a genre. You can’t say it’s this or that. He has elements of jazz and all that. I really like his stuff. Really love it. Even though you can’t always see that in my music, but I’m always trying to invent myself as well.

I really like this guy Dam Funk and he plays all this stuff on old eighties equipment and does all this super cheese funk and it’s amazing. The obvious is Flying Lotus. He brought in the whole movement I think. I kind of heard him a little bit later. He definitely influences me.

A lot of people who influence me the most, nobody knows who they are because it’s my friends that I talk to, but they make amazing music. I feel like that’s what it is. Everyone has a Myspace page and you get to hear a lot of this music that people don’t always get to hear because they don’t have any released music. I think my ears are really open. That comes from starting to play shows and things, I kinda got the DJ thing happening now where sometimes I won’t even make music for a week and I’ll just be collecting it and finding new stuff. Hitting up people who maybe only put up two songs, but one of those songs is really good, and I try to show that to other people.

The internet is huge. They’re playing my stuff on Rinse FM, a pirate radio station in London. It’s beyond my control because once you get the free stuff out, people just take it and do their thing.