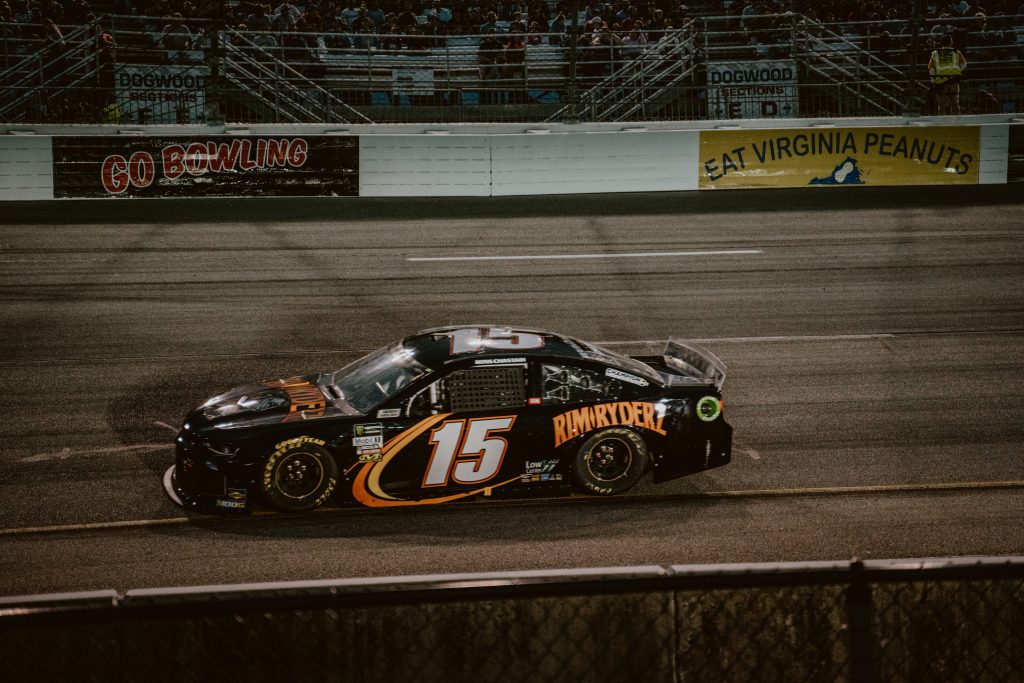 While the history of NASCAR may lie in the bootlegging, blockade-running days of Prohibition in Appalachia, today’s races marry the sport’s moonshining, outlaw-racing origins with the modern world. Racing in 2019 invites folks to fly their own flags alongside the colorful and checkered symbols of its own, encouraging fans old and new to experience the excitement from all walks of life.

No two tracks may be the same, but Richmond brings something special to the table for both drivers and fans. Our track, smaller in comparison to multi-mile raceways like Talladega or Daytona, makes for tighter turns and higher difficulty (i.e., more fun). On the other side of the fence, Richmond Raceway has a yellow brick road of sorts, manifested in an access tunnel for the public that lets lucky fans catch the race from inside the track.

Among the lucky, our crew got to walk the “road under the road,” stepping out on the other side of the tunnel into the center of the infield.

The newest adaptations of the cars, whose glory days of the 60s and 70s only pushed out about 250-300 horsepower, have more than doubled: Richmond Raceway’s track allows for cars that pack around 750.

Gearing up for the race, fans piled in from around the country as early as 6am last Tuesday morning. Campers, trucks, tents, and golf carts lined the fields around the raceway to tailgate and celebrate, with the same excitement that sparked with the sport decades ago.

With a special mural dedication before the race, NASCAR honored a treasured local artist, Sam Bass, who called Richmond his home and worked with the organization for years before passing away earlier this year. The mural, which can be found in the raceway’s media center here in town, drives home the importance of Bass to the racing community throughout the years.

The Richmond Raceway grounds are home to more than the track; they hosted events all weekend, including public Driver/Crew Chief Meetings, Toyota Thrill rides, Virginia Lottery giveaways, and a Craft Beer Fest full of breweries from around the state.

If you’re planning to hop in the Toyota thriller next time around, make sure you’re not weak of heart or stomach — in stock Camrys, fans can hop in with professional drivers to have the guts scared right out of them in twists, turns, burnouts, and close calls with the wall, all designed to bring your breakfast back up (and still have you jumping back in line for another round).

Down in the infield, pit crews line the track, while fans full of beer and Larry’s Lemonade gather at the gates to watch the action. Each car and driver are unique to their own specs, but experience reigns supreme.

“While the entry point for NASCAR might seem intimidating for first-time race-goers, the experience is unlike any other sport,” wrote RVA Magazine managing partner Landon Shroder following last September’s Federated Auto Parts 400 at the track. “And unlike other forms of motorsports, NASCAR is unique in that there is a certain level of egalitarianism to the way the teams are structured. What this means, in real terms, is that unlike Formula-1, the NASCAR team with the most money is not always likely to win.”

“For instance, NASCAR regulates just how big the engine can be, limiting the size to 358 cubic inches, restricting the amount of horsepower an engine can produce. This ultimately makes the racing experience more about driver competency, rather than dollars spent on high tech racing gear. Because of these rules, the leaders of the race change frequently – sometimes with multiple race leaders on a single lap.”

Every point of the track during a race brings a unique experience to the table. From the infield, the behind-the-scenes area gives a personal look at crews working while drivers rush on around you. The Richmond Raceway has tickets for regular seating and infield access to open the thrill to fans of all kinds, and from above the track and along the straightaway, the speed of the cars can feel unbelievable as drivers accelerate by in colorful blurs with each passing second.

Until you’ve seen it in person, the excitement of the days-long party that surrounds professional stock car races is hard to imagine in its full fire — and like all things Richmond, the raceway holds a part of our culture that can’t be found anywhere but here. With a case of beer in arm and a ticket in hand, a day at the track is an experience like no other in the River City.

The 400 race is returning this fall. We’ll see you there.

The Evocative Street Portraiture of Will Templeman

Richmond photographer Will Templeman is making waves. Only 20 years old, he's showing work all over the world in the coming year, from... READ MORE

RVA Mag #38 is on the streets now! Here’s another article from the issue, a photo feature in which photographer Heaton Johnson and... READ MORE